I was devastated! Swansea’s Nathan Dyer frustrated to be denied hat-trick 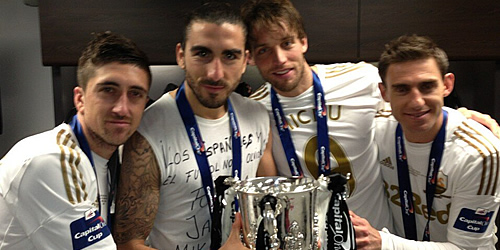 Nathan Dyer admits he was devastated to be denied the chance to become the first player to score a hat-trick in a League Cup final despite Swansea City’s 5-0 victory over Bradford City.

The winger scored either side of half-time and Michu’s goal to give Michael Laudrup’s side a commanding 3-0 lead at Wembley in the Capital One Cup final on Sunday.

When Jonathan De Guzman was fouled in Bradford’s area by goalkeeper Matt Duke, Dyer wanted to take the spot-kick to complete his treble.

But De Guzman, who was the designated penalty taker, refused to relinquish the responsibility.

And Dyer was visibly frustrated as the Netherlands midfielder struck an emphatic penalty past replacement shot-stopper Jon McLaughlin before scoring a second in added time to add gloss to the scoreline.

“To get a hat-trick at Wembley in my first cup final for Swansea City, you can’t write that and I feel like it did get taken away from me a little bit. But we’re team-mates at the end of the game and you have to move on,” Dyer told talkSPORT.

“I haven’t scored a hat-trick in my career, so I was devastated not to have got it. It was hard to take and hard to swallow but we won, we won the cup and made history and that’s the main thing.

“I scored two goals as well and got the man-of-the-match, so I can’t really ask for more.”