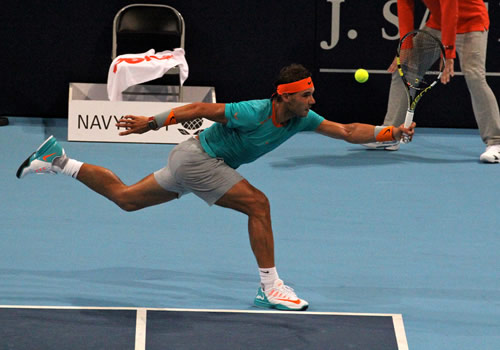 Rafael Nadal admitted his relief after beating qualifier Simone Bolelli 6-2 6-2 on Monday to make a winning start to the Swiss Indoors Basel.

The Spaniard has been struggling with appendicitis and conceded that he had doubts about his fitness levels heading into this week’s tournament.

However, the 28-year-old secured victory in 71 minutes to reach the second round in Switzerland.

“I had doubts after what happened the last couple of weeks,” said Nadal after playing in his first match since suffering an opening-round loss to Feliciano Lopez at the Shanghai Masters two weeks ago.

“I felt tired during the match but I think I played at a positive level.

“I didn’t have a chance to practise enough so it’s very important for me this week when you feel your body is not 100 per cent. But I think I played a good match, not many mistakes.

“I can do more with the ball, but I’m more confident than in the last four months. To be able to win the match the way I did is very important for me.”

He added: “When you come to a tournament, you have responsibility. Coming here, worried that I may not feel very well and may go out without a positive result, so that was a scary thing.

“You try to do well, to be ready for the fans, especially in a place I haven’t been for a while. I was a little bit nervous before the match, so I’m happy with the way that I played.”