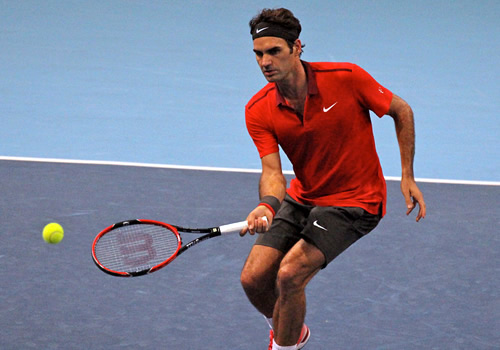 Roger Federer knew that his second match in Basel would be not just be different but probably more difficult.

Denis Istomin may not have beaten Federer in their previous five meetings, but at the same stage last year, the bespectacled No55 from Uzbekistan won the first set before Federer turned things around, 4-6, 6-3, 6-2.

And in an eerie repeat of that match, Istomin did just the same this time, sucking the enthusiastic chanting out of St Jakobshalle as Federer played an error-strewn sixth game to face three break points, and Istomin took his chance.

Federer had the chance to break back in the next game, but Istomin aced to take it to 5-2 and served out the set, 6-3, in 30 minutes.

The second set was a mirror image of the first, with Federer going on the rampage against the Istomin serve to bring up three break points. He converted the third and then held to love for a 5-2 lead and served out the set, 6-3, in another 30 minutes.

The third set, though, was rather different, beginning with a 10-minute game as Federer pressed hard on Istomin’s opening serve to bring up four break chances and four deuces. Istomin finally held, but immediately faced the same pressure after a quick hold from Federer: four more break chances and deuces, and this time Federer broke.

He roared, the arena roared, and he went on to hold for 3-1. The margin was enough for Federer to relax, attack at every opportunity, throw in some wicked drop shots and put away a couple of smashes. He served it out, 6-3, in an hour and 48 minutes—a full hour longer than his first match had taken.

Federer was forthright about his performance at the start of the match but happy with how he responded: “I thought I was lacking rhythm in the first set, but still thought the set was close: He played well when he had to on break point.

“Important to bounce back in the second set, and get my teeth into the match, and then in the third set I thought I had the upper hand, got more consistent on my serve. It was tough, and a good match at the end.

“I didn’t hit my forehand on the run very well, I was making poor shot selections sometimes early on, and the key was to clean it up as quick as possible to find a way into the match and give myself an opportunity for tomorrow.”

He was also happy about his physical condition—something he said before the tournament that he was interested to test: “I feel fine.

“I think the first couple of sets went pretty quickly and then it was tough for the first 20 minutes of the third set but other than that it was kind of straightforward. So from that standpoint I don’t feel I had to use that much energy, other than maybe mentally, just really focus hard not to get a silly break in the second and in the third to put myself under even more pressure.

“Obviously I’ve got to recover for the next day but the good thing is in recent times I’ve played so many matches I know how to bounce back.”

By chance, Federer’s quarter-final match-up will also be the same player as last year, and a highly anticipated meeting it is, too. He will take on Grigor Dimitrov for only the second time as the Bulgarian, whose game has so often been compared with a young Federer’s, tries to turn around the straight-sets loss he had last year.

Dimitrov, who survived a gruelling challenge from 17-year-old Alexander Zverev yesterday, beat another young talent, Vasek Pospisil, with stylish ease, 6-2, 6-2 in a little over an hour.

Meanwhile, the other 17-year-old in the draw, Borna Coric, set an equally anticipated quarter-final clash with Rafael Nadal after beating first Ernests Gulbis and then Andrey Golubev, 6-4, 6-4.