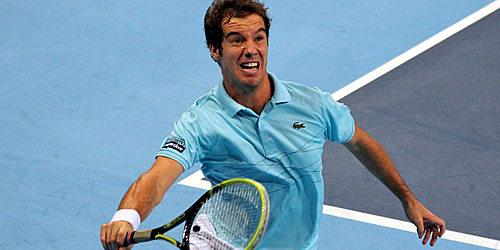 As the Basel draw funnelled into its final stages, there was more and more to make the mouth water. The top two seeds, the two top-10 players and firm qualifiers for the World Tour Finals, Roger Federer and Juan Martin del Potro, were both present and correct.

What’s more, they were paired to play men designed to bring out their best qualities. The fresh, adventurous talent of fast-rising Benoit Paire, at a career-high 46, was new to Federer and the young Frenchman has nothing to lose and lots to relish in their first encounter.

And the No2 seed del Potro, happy in the knowledge that he had already confirmed his place for the World Tour Finals, played an even taller, powerful big-serving man from South Africa. Kevin Anderson had already served up 26 aces in his two matches and he too hit a career-high ranking earlier this year.

Alternating with the top seeds, though, was tennis with the potential to delight the most demanding of aficionados. The handsome young Grigor Dimitrov, a rising star with a charismatic game, played a home favourite here close to the French border, and Paul-Henri Mathieu also lives in Geneva.

But if Federer was the headliner and home favourite on quarter-final day, the No3 seed Richard Gasquet was not far behind.

Ever since he burst on the scene as a teenager in 2005, wielding his glorious single-handed backhand to beat Federer at the Monte Carlo Masters, he had carried the hopes of France—and many more fans besides. Burdened with the tag “baby Federer”, he was tipped for the very top.

He reached No7 as a 21-year-old but then struggled with consistency and confidence. Now, though, he was bidding to keep alive hopes of reaching the tour-ending climax for the first time since 2007, riding at No11 in the race after winning in Bangkok and reaching finals in Estoril and the Toronto Masters.

He faced another single-handed backhand in Mikhail Youzhny—and the Russian can turn on the flair, too. A former world No8, and had beaten Gasquet four times in their six meetings.

Youzhny, like Gasquet, also had some real motivation here: He was hoping to win his 400th career match and had dropped only six games in his first two Basel matches.

Both men started with fine ball-striking, a succession of winners and real pace. Youzhny won his opening point of the game with a backhand winner, the second after a long backhand exchange, the next with a serve and volley winner, and closed the game with an ace. And the tennis continued in a similar vein.

The tactics of Gasquet in overturning his losing record against the Russian quickly became clear: attack. He confirmed as much to me afterwards:
“He’s a very competitive player, hard to play against…It’s a fast court so I needed to go to the net, and especially to serve and return well. I played the big points especially well with my backhand.”

And he did just that. He rushed into the net, stepped into the baseline to receive serve, and struck his backhand crisply in offence and defence. It earned him a break in the third game but his opponent returned in kind, attacking at every opportunity.

Youzhny’s backhand has a more limited action than the exaggerated sweep back of Gasquet, and although it is a powerful weapon, it does not have the flexibility and variety of his opponent.

Gasquet’s retrieval was outstanding, and after an attacking hold of serve to lead 4-2, he earned more break points. Youzhny saved two, smashing his way out of trouble at the net, but an overlong forehand gave Gasquet another break—and the Russian racket took the blame, broken in two and handed to the nearest ball girl.

The second set maintained the same standard, the same attack and the same intensity. Both continued to try and take control, as much on return of serve as on serve. It brought two reciprocal breaks at the start of the set.

Gasquet was unable to maintain quite such a high level as in the first set—his serve was less consistent—and that gave the Russian more opportunities at the net. It developed, therefore, into a very closely fought set with no more break point chances.

It was encapsulated by a pair of games in the middle: Youzhny held serve to love with a serve-and-volley play, and Gasquet did precisely the same to level at 4-4.

This would be decided by a tie-break, and that too edged point by point, to 4-3, with Youzhny, now roaring himself on with each point, holding a point against Gasquet’s serve. But he double faulted to hand his small advantage back and did not get another chance. Gasquet took the next vital point against serve at 6-5, and he took the next to win set, match and a place in the semi-finals.

Asked about his feelings on being so close to reaching his first World Tour Finals after so long, he was excited: “It’s very nice to be part of that: As you say, it’s five years since I did it and I will try my best to do it. I need to win some more matches, starting with tomorrow.

“I’m playing really good tournaments this year, I’ve won a lot of matches, so I know I am playing well – I’m in another semi-final. When you’re winning matches, you’re more confident.”

To reach the final, he will have to play one tall, powerful man—a real challenge to Gasquet’s attacking mindset. Whether it would be del Potro or Anderson, only time—and a deciding set—would tell.