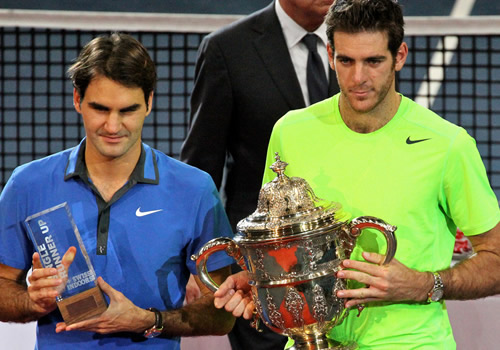 Rarely in recent years has the race to the ATP World Tour Finals remained so open so late in the season.

With just four of the eight places filled, there is frantic jockeying for position as play gets under way for the last fortnight of big-points tournaments: the concurrent 500s in Basel and Valencia followed by the Masters 1000 in Paris.

Two of the hottest favourites were in action as top seeds this week. No8 Jo-Wilfried Tsonga headed Vienna, but missed his chance to overtake Roger Federer, one place above him, by losing his semi-final.

Richard Gasquet has reached the final in Moscow and, should he win, he will leap-frog compatriot Tsonga into eighth place.

Meanwhile, at the age of 35, Tommy Haas is keeping alive his hopes of reaching a first World Tour Finals, having missed it by one match-win in 2001. His resurgent tennis of the last 18 months has seen him race into 11th spot, and he will play for still more points in the final of Vienna this weekend—a title he last won in that same year of 2001.

However in Basel, where the draw took an unexpected last-minute turn, things have opened up for several men focused on sealing London.

Rafael Nadal, who had not played the Swiss event since 2004 and had never won a match there, signed up to Basel before he went on a 10-title surge back to world No1. After his US Open victory, he played back-to-back tournaments in the Asian swing, reaching the final in Beijing and the semis in Shanghai, but it clearly proved too much, especially as the Spaniard is campaigning both to hold the year-end No1 ranking and also to win his first WTF trophy.

Barely 24 hours before the Basel draw, Nadal announced: “I won’t travel to Basel… after very exhausting weeks I have to regroup my fitness and my body.”

Coming after a late withdrawal by Andy Murray last year, this was indeed a blow for the tournament, and it was followed by another. After a quarter-final loss in Stockholm by the young Canadian, Milos Raonic, he also pulled out of Basel and thereby reduced his very real chances of London qualification.

But these misfortunes have given a boost to the campaigns of fellow players. With Nadal’s withdrawal, defending champion Juan Martin del Potro became the No1 seed in Basel and that left room for Stanislas Wawrinka—ahead of Federer in the race but behind him in the 12-month rankings—to become the No4 seed.

As it happens, del Potro and Wawrinka ended up in the same half, and as both have decent draws, they look highly likely to meet in the semis.

Del Potro is slated to face Gasquet in the quarters, but the Frenchman will surely be weary after his late dash from Moscow to play in Basel. This section of the draw also holds three qualifiers—indeed all four qualifiers fall in the top half. Del Potro has been helped a little more by drawing the 230-ranked wild card, Henri Laaksonen, in the first-round.

The other two men in this quarter are No75 Marcos Baghdatis, who lost in the first round in Moscow this week, and No58 Michael Llodra, who may pose a first-round challenge to compatriot Gasquet. The 33-year-old is a serve-and-volley player who thrives on speedy indoor courts.

Wawrinka’s segment is also straightforward, especially for a man who has taken Murray and Novak Djokovic to the limits this season. The only other man inside the top 50 is the other seed, the 22-ranked Andreas Seppi, and the Italian plays the next highest in the section, No57 Daniel Brands, in his opener.

Wawrinka has beaten Seppi in both their 2013 meetings, though the Italian won the first set in the most recent in Beijing. But a semi between Wawrinka and del Potro is certainly on the cards and it could be a fascinating match, as both men are in their best form since two close tussles on clay in 2009. The Swiss man, with a home crowd and the lure of London, might just turn this one in his favour.

And that could set up the most exciting of finals for this Swiss city, between two home men who stand shoulder to shoulder in the rankings for the first time in their careers.

Federer, in the absence of Nadal, has stepped into the spotlight of the Monday night launch event—a spot he has filled more often than he has had hot dinners. Five times he has won the Basel title, and only once since his first appearance in 2000 has he been seeded as low as four.

To match this year’s No3, Federer has to go back more than a decade, indeed to the year he began his unbroken 11 years at the World Tour Finals in 2002. And he will hope, at the very least, to make it either to that all-Swiss final or to a repeat of last year’s final against del Potro, for he needs big points to stave off the charge for the remaining four London places.

But he has his work cut out to do so in a bottom-heavy draw. Looming large in the semis, for a start, is Tomas Berdych, who only needs a couple of match wins to seal the fifth place in London. More significantly, he has beaten Federer in their last two meetings, both on hard courts.

The other seeds in their quarters, both young rising stars, can play lights-out tennis on a good day, too. Berdych has drawn Kei Nishikori, ranked 18 and with the scalp of Federer at Madrid this year. And by coincidence, the Swiss man has drawn the 28-ranked Grigor Dimitrov who took out Djokovic at that same tournament. The much-admired style of Dimitrov has also taken him to his second career final this weekend in Stockholm.

Federer’s first opponent is Adrian Mannarino, who he beat in short order at this year’s US Open. The next round will bring the survivor between the 47-ranked Denis Istomin and 48-ranked Horacio Zeballos, and recent form suggests it will be the former. The Uzbekistan man had some good wins on the hard courts this summer.

Also in this segment is the unpredictable wild card Alexandr Dolgopolov, as well as Radek Stepanek, but Berdych, too, has some big-hitting competition in his quarter.

First he faces Ivo Karlovic, who lost to Gasquet in this week’s Moscow semis. Next is either Robin Haase, a current finalist in Vienna, and the huge talent of Vasek Pospisil, who beat Berdych in Montreal and Gasquet in Shanghai.

Nishikori’s segment contains Ivan Dodig, at a career-high 29, and Carlos Berlocq, who won his first ever title in Bastad in July and subsequently scored wins over John Isner and Philipp Kohlschreiber.

It is a half, then, where any number of men could turn on the form to cause an upset, but with Federer and Berdych both coming fresh to Basel, they must be favoured to reach the semis.

Between all four of the top men, though, it is a hard call. However if the home crowd has anything to do with it, their No3 and 4 seeds will bring a suitably Swiss conclusion to Sunday’s final—and take both Federer and Wawrinka an important step closer to London.