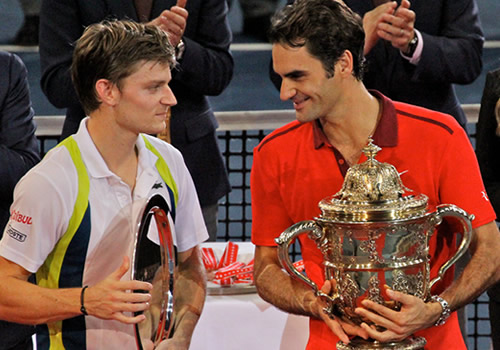 The quietly-spoken 23-year-old David Goffin had not only taken the tour by storm this season, he had also begun to take Basel by storm, too. Even his cheeky on-court comment about a possible final against his childhood idol Roger Federer charmed the home crowd.

“It may be I can have a little revenge on him for the French Open!”

The Belgian was referring to his one and only meeting with Federer in 2012 at Roland Garros. It was Goffin’s first main draw appearance at a Grand Slam and, as a Lucky Loser, he not only reached a fourth-round meeting with Federer but won the first set and pushed him in the second, finally losing 7-5, 5-7, 6-2, 6-4.

The promise of the slight, nimble Goffin, then, was clear and he ended the year inside the top 50. But his progress took a knock after he required surgery to a broken wrist in September 2013.

However since a first-round loss to Andy Murray at Wimbledon this year, Goffin has put together a 43-2 run, winning two ATP titles and four Challengers.

The Kitzbuehel trophy marked Goffin’s first main-tour victory and made him the fifth champion born in the 90s. After winning the Mons Challenger this month, he broke into the top 30 for the first time and with his run to the final in Basel, he is assured of a ranking of at least 22. No wonder he is one of the ATP’s nominees for Comeback Player of the Year.

Federer’s recollections of that first meeting were very positive, as were his latest impressions: “I thought he already played great back then, so it’s nice seeing him playing well again. I think he is very talented player who has all the shots. He’s quick. I think it’s going to be a difficult final to be honest, because he’s won so much this year—but I’m playing very well as well.”

That was, of course, an understatement. Federer, the 10-time finalist and five-time champion in the city of his birth, had turned around his least successful year in a decade to come within touching distance of reclaiming the No1 ranking after compiling the most match-wins, 65, most finals, 10, and most top-10 scalps, 13, on the tour. Add in that Federer also owns the best career percentage indoors, and Goffin had his work cut out.

There was another element that made the contest mouth-watering, though. Neither is the biggest of players, neither has the biggest of serves, but both have all-court skills, a deceptive variety on serve—Goffin had scored 42 aces, Federer 32 in the tournament—both have nimble footwork and both can transition from defence to attack, happily finishing at the net, given the chance.

But Goffin, who beat his first top-10 player in Milos Raonic this week, looked gripped by nerves, and not surprising given the ovation Federer received from the passionate local support when he walked onto court.

Federer also put the younger player in to serve—a wily move to test Goffin’s nerves still further. It worked: the Belgian opened with a double fault, put a forehand long and conceded an immediate break.

In contrast, Federer’s serve was into its groove straight away. He dropped only one point, in his first service game, in the whole set, broke again in the seventh game with a cracking forehand return of serve, and sailed to a 6-2 lead in 24 minutes.

He had come to the net hardly at all: He had not needed to. Instead he plied the court on both wings and with near-perfect depth.

Goffin opened the second set with a double fault, too, but did begin to find the kind of rhythm that had broken open the games of Raonic and then Borna Coric. He held to 2-2 with ease, but the pressure did not let off and, just as before, Federer’s blew holes in Goffin’s court with two forehand winners to break in the fifth.

Federer did the same in seventh—a return-of-serve forehand winner and then another onto the baseline. Goffin challenged, but it was always going to be futile. Federer broke and served out, 6-2, in just 51 minutes.

The young player got a standing ovation, not for this match but for the tournament, and it almost moved him to tears. He afterwards admitted to initial nerves but put his loss down to Federer’s quality: “He’s in great shape and he played so good today. He was too fast for me. I didn’t serve very well but he served really good. His serve is just perfect: You cannot read where it is going, it’s not easy to return, so that’s why it was a nightmare for me today [laughing].”

And on his serving, Federer concurred: “I was really able to control the match with my serve and variation on the return.

I was fresh today, again the fifth day of tennis in a row, same as Shanghai, and I’m happy I’m able to keep it up time and time again. It was a great final for me: I think I played really well.”

There’s no doubting the pleasure the boy from Basel has taken in this victory: He was full of fun in all three languages when it came to face the media: His parting shot: “Ah, mustn’t forget I have to do the pizza [with the ball kids]!”

But what stands out is that, at 33, he can impose himself on men—two in a row this week—a decade his junior, and in whatever style of tennis they throw at him.

When he arrives at the Paris Masters with his sixth Basel title, his 82nd overall, and a 12-match win streak, he will be fewer than 500 points behind Novak Djokovic in the race to the year-end No1. He has been coy about how important that is alongside his campaign for the World Tour Finals and Davis Cup—but it is certainly now within his grasp.