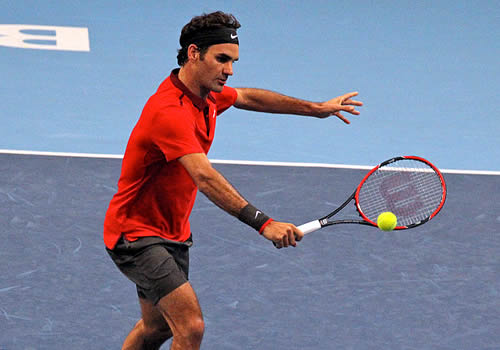 It would be fair to say that this year’s Swiss Indoors has created some surprising, story-lines, probably topped by Rafael Nadal’s abrupt departure in the quarters with the announcement that it would be his last match of the year.

World No4 and Australian Open champion Stan Wawrinka, made his second consecutive first-round tournament exit and his third in this his home town.

Two 17-year-olds made a big impression: Alexander Zverev took the first set against No5 seed Grigor Dimitrov before losing in three; Borna Coric, who won his first Challenger last month, having come through qualifying to reach the second round at the US Open, thrilled the Basel crowd with his wins over Ernests Gulbis, Andrey Golubev and Nadal. Coric was now in his first ATP semi-final.

Then, among a slew of 23-year-olds in the draw, it was not the two seeds competing for a place in the World Tour Finals who came through but the slight, quiet 5ft 11in David Goffin. The Belgian had come back from a broken wrist a year ago to win his first two ATP titles, put together a 42-2 winning streak since Wimbledon, and climb from No106 in July to a current 28.

In contrast, the semis also featured the 35-year-old 6ft 11in Ivo Karlovic, up from a ranking 80 in February to a current No31. Not surprisingly, he led the tournament in aces—60 of them.

The one constant in all this, and in Basel in particular, was the presence of the 10-time finalist and five-time champion in the city of his birth, Roger Federer. After his least successful year in a decade in 2013, he was, at 33 years of age, within touching distance of reclaiming the No1 ranking after compiling the most match-wins, most finals and most top-10 scalps on the tour.

Such an unexpected semi-final line-up was this that, whichever combination of the four advanced to the final, they could boast only one previous meeting between them.

One semi featured Coric and Goffin—and it showed just how mature both could be under pressure. Teenager Coric is an expressive player, wearing his heart on his sleeve, yet at moments of pressure seems able to keep things under control.

The calmer Goffin, however, got off to the better start, snatching a first break chance with a smash. Coric came back, playing drops, chasing to the net, but could not convert two break points and Goffin took first blood, 6-4.

Coric was tested right at the start of the second set, serving though four break chances and five deuces to survive: It gave him a boost and he broke and held for 3-0. He served a 205kph ace for 4-1 and held with another ace for the set, 6-3.

Now, though, Goffin seemed to get a second wind while the younger player slipped into errors. Goffin made a cracking down-the-line backhand pass to break and held his lead for a 6-3 victory—holding off one last break point into the bargain.

Goffin afterwards confirmed that he is a calm individual both on the court and off, but serving an ace on that last break point, he smiled “because I was a little bit nervous.”

He clearly relished the prospect of playing Federer, against whom he made his breakthrough in his first ever Grand Slam main draw, taking Federer to four sets at the 2012 Roland Garros: “If it’s Roger, it will be a revenge match after the French Open.” It would also be nerve-wracking, for Goffin is himself a great Federer fan. Would he get his wish?

Well in the second semi, even by Karlovic’s standards, the Croat’s serving was outstanding, but Federer himself only dropped one point on serve in his first three games. So when he failed to capitalise on three break points in the fourth game, it was a blow. From there on, Karlovic cranked up to 224kph, and barely offered a touch to Federer’s racket.

It confirmed that Federer could not afford a slip, so a couple of double faults at 4-4 looked dangerous. He held off a break point and four deuces, and sure enough, for the 16th time in their 30 sets previous sets, it went to a tie-break. Twice Federer saved set point, and a chipped backhand return snatched the set, 7-6(8).

A couple of errors from Federer in the eighth game of the second set, not surprisingly, proved fatal. He was broken and saw Karlovic serve out, 6-3, with three aces.

St Jakobshalle was, by now, in uproar. Every time Federer got a point against the Karlovic serve, they lifted the roof. When he got two in fourth game of the third set, the noise became deafening—and on the third, for 0-40, it was heart-stopping. No wonder Karlovic hit only his second double fault of the match.

Federer had the break, the Swiss crowd went into endless Mexican waves, and their hero served to love not just once but twice—the final point a blazing backhand volley winner, to reach his 11th Basel final, his 123rd overall.

Federer had to face 33 aces, and was clearly relieved to have come through: “It’s always a good feeling, getting out of it as a winner. I thought [Karlovic] maybe served his best against me ever. But I thought it was very impressive. It was close. I didn’t expect to break in the third set, so very happy to get that and then bring it home.

“I never thought I would be this successful ever at this tournament. Clearly I’m overjoyed and hope I can play another good match tomorrow and enjoy the final.
I really felt the crowd support was amazing—and the streak is great—but of course I’m just going to focus on trying to win tomorrow.”

He afterwards looked rather more tired than he had on court—as someone with so many matches under their belt would be—and he does not underestimate his young opponent: “It’s nice seeing him playing well again. I think he is a very talented player who has all the shots. I think it’s going to be a difficult final to be honest.”

Tune in to find out which decade prevails: Federer’s 33 or Goffin’s 23.