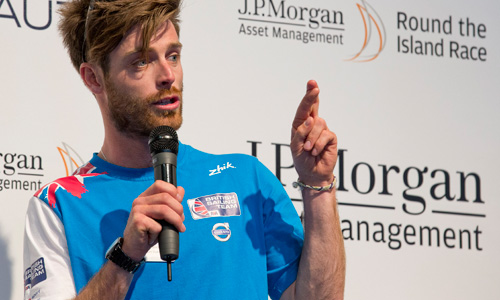 With the likes of Sir Ben Ainslie not competing at the 2016 Rio Olympics, it now falls on the next generation of Team GB stars to impress – and Luke Patience is determined to do just that in Brazil.

Patience, a London 2012 Olympic silver medalist, will compete alongside Elliot Willis and knows the race to Rio gathers significant momentum at September’s World Championships in Santander – a regatta where all Rio classes will be represented.

With just one British boat able to represent Team GB in each individual discipline at the Rio Olympic Games, Patience knows how crucial it will be to put down a marker in Spain.

And having taken the weekend off to compete at the J.P Morgan Asset Management Round the Island Race for the first time; Patience knows the hard work will start again immediately as he looks to achieve his life-long dream of following in the footsteps of Ainslie and claiming Olympic gold in 2016.

“The Olympic cycle is going well; Elliot and I teamed up earlier in the year which is a late partnership for Rio,” said Patience.

“But we both collectively had our previous partners retire. They started the cycle and were like ‘nope’ so that was a bit of common ground for us.

“We’ve known each other for years and we’ve actually hit the ground running. We’re Britain’s number one and I think we’re ranked three in the world and we’ve just started.

“So we’re really up and running now but there’s plenty work to do; two years worth of hard, hard work.

“But I can honestly stand here and say that I’m confident we can arrive on the start line for the Olympic Games and be a team that can bring home a gold medal.”

Patience admitted his weekend sailing against amateurs at the J.P Morgan Asset Management Round the Island Race had been a welcomed change of pace.

Normally Patience races in the 470 fleet alongside just Willis but being part of an extended crew had been an enjoyable experience.

“It’s my first RTI race, I’ve never done it before and it’s really cool to be here,” he added. “The atmosphere is amazing, I’ve never even been here as a spectator so it’s great to be here now.

“I really like it, it’s good British stuff and it’s a great event to finally be a part of. We’re mid season at the minute and this is something that comes at a nice time.

“I’ve been lucky enough that team Volvo invited us over and we get the chance to do it. It’s just a really nice thing to do and it’s an aside from all the Olympic stuff.

“We’re in 2014 now, we’re mid-season, mid-competition, we’re all going every week so it’s cool to come and experience it.

“Even to just say I’ve done it is great because it’s such an historical part of our sport and one of the largest sporting events in the world.

“All the boats on the water at the start will just paint the water with sails and its funny when you think about it because it’s ordered chaos.

“There’s no room but somehow everyone manages to get around and no one gets hurt.

“There’s a great inclusivity about the event and what we do is so business-like day in day out; there’s targets to hit and it’s filled with expectation and pressure.

“I appreciate it for what it is and I love doing it but there are moments where you forget that there’s an element of fun.

“So it’s coming and doing things like this weekend which is a great way to fuel that side.”

The J.P. Morgan Asset Management Round the Island Race (Saturday 21st June) is one of the largest participation sporting events in the UK and the largest yacht race of its kind in the world. Organised by the Island Sailing Club in Cowes, it is dubbed ‘Britain’s favourite yacht race’, regularly attracting around 1,500 boats and 16,000 competitors www.roundtheisland.org.uk