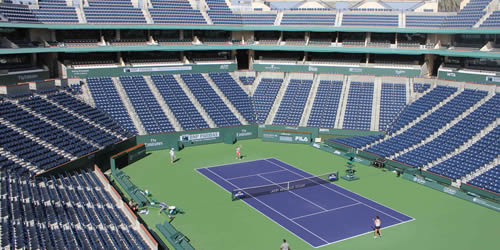 The jewels in tennis’s ATP calendar, its nine Masters events, are here at last. And as if to celebrate, March is given over entirely to two of them: the back-to-back sun-drenched Indian Wells and Miami.

These are the last hard court events before spring ushers in the clay, and this artificial, punishing surface will not appear again until the tour heads back to North America in late July.

Little wonder, then, that the hard court siblings of the United States draw the biggest crowds and some of the biggest prizes outside the Majors.

The first of them, indeed, is regarded as the fifth Grand Slam. The Indian Wells Tennis Garden hosts the largest ATP and WTA combined two-week event in the world and its Stadium Court, at 16,100, is the second largest of any tennis-only stadium on either Tour: Only the US Open’s Arthur Ashe is bigger.

Its draws, too, fall only a little short of their big New York brother, with a full 96 players in each—a long, gruelling fortnight of seven rounds for all but the 32 seeds.

Probably no surprise, then, that nowhere else competes with the first and the biggest Masters in prize money. For the first time in the history of the BNP Paribas Open—and for any ATP Masters or WTA Premier event—the players will compete for more than $11m in prize money, with the men’s and women’s singles champions each taking home $1m.

Is it any wonder that the 2012 line-up includes 14 Grand Slam champions. 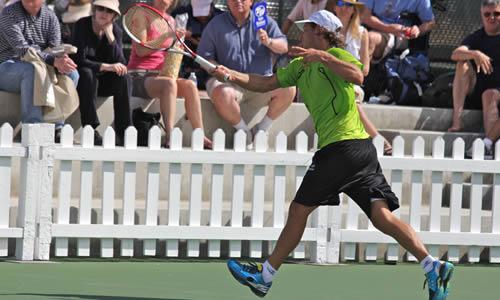 David Nalbandian, one of five wild cards in men’s draw

But all the eye-watering facts and stats in the world cannot do justice to this jewel of an event. For the Indian Wells Tennis Garden is set like a sapphire in the Californian desert, a place drenched in a deep violet-blue wholly in tune with its watery origins.

It overflows with flowers, trees, and fountains, and the courts sit like miniature Aegean Seas within their grass-green surroundings. It’s styled to perfection: Even the seats and canopies echo in green and blue towards the sky.

Embracing this tennis oasis are the pale blue peaks of the distant Santa Rosa mountains, a serene backdrop that shimmers in the dry heat beneath cloudless skies.

This is, in short, as close to paradise as wealth can bring to the desert.

So here are a few morsels to give a little more colour and texture to the tournament that launches the steep six-month climb to the US Open via eight more 1000 titles, two other Grand Slams and the Olympics.

The defence of Novak Djokovic

The world No1 overtook Roger Federer in the rankings for the first time by winning the title at Indian Wells last year. Now competing for this 11th Masters and his third crown in the desert, Djokovic is 3,000 points clear of the field.

Since reaching the quarters last year, Azarenka has overtaken all her rivals to hit the No1 ranking with an unbroken 2012 run of three titles—Sydney, the Australian Open and Doha—from five straight finals. The woman she overtook to reach No1, Caroline Wozniacki, is the defending champion.

The return of Rafael Nadal

The world No2 is also a two-time winner—2007 and 2009—and was runner-up to Djokovic last year. This is his first tournament since taking a month away from the tour for rest and recuperation after the Australian Open.

Here more than anywhere, the top singles men enjoy double the fun. Djokovic is set to join Viktor Troicki: the pair reached the quarters last year. Nadal reunites with Marc Lopez: they won in 2010 and reached the semis last year. And last year’s quarterfinalists, Andy Murray and brother Jamie, also feature. Taking them on are Mike and Bob Bryan hoping to win one of the biggest titles missing from their trophy cupboard—and that’s aside from the defending champions, Alexandr Dolgopolov and Xavier Malisse.

The run of Roger Federer

Federer’s only losses since the semis of the US Open have come in the semis of the Australian Open and one Davis Cup tie. He has won four titles along the way, including Dubai last week, and is the only man to have won three straight Indian Wells titles: 2004 to 2006.