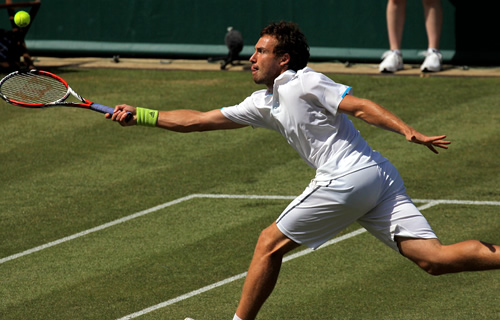 Ernests Gulbis in action at the Boodles Photo: Marianne Bevis

With the grass-court season just one week old, the shortest and, for many, the sweetest swing of the tennis year has seen two starry names claim pre-Wimbledon titles.

At Queen’s, the biggest and oldest tournament of the green set, a new name was added to the famous silver trophy, that of world No13 Grigor Dimitrov. A former Wimbledon junior champion, this elegant, charming player has always promised success on the surface he loves the best, and the Aegon Championships yielded his first grass title.

In Germany, at the smaller but certainly no less star-studded Gerry Weber Open in Halle, the king of the tournament, Roger Federer, won for a seventh time. Almost a decade older than Dimitrov, it was nevertheless no surprise. Federer remains the most successful grass-court player of the Open era, whether measured by match-wins or titles—seven of which have come at Wimbledon.

This week, another set of grass hopefuls takes to court in Eastbourne and s’Hertogonbosch.

On the English coast, Richard Gasquet and Alexandr Dolgopolov try their luck and try to wrench the title from the defending champion Feliciano Lopez, who missed out on the Queen’s title on Sunday by the closest of margins.

In the Netherlands, one Spaniard, Fernando Verdasco, has taken the top spot from another after David Ferrer was forced to pull out with a virus, suggesting worrying times for the world No7 who will now head into Wimbledon without a single game on grass.

But also squeezed into this packed and high-profile calendar is a handful of small gems that provides an alternative transition from the French Open’s clay to Wimbledon’s grass.

These are the warm-up, points-free, garden-party settings of venues that sit alongside The Season’s other June highlights of Royal Ascot and Henley Regatta.

One of them, The Boodles, has made a habit of attracting one of the biggest names in tennis, the world No2 Novak Djokovic, who is breathing down the neck of Rafael Nadal in the rankings.

The Boodles is hosted at Stoke Park’s stunning 350-acre estate in the depths of the Buckinghamshire countryside, perhaps the most picture-perfect setting in the English tennis scene.

The super Serb has excelled at Wimbledon, reaching the semis in 2007 at just turned 20, and not falling short of the same stage since 2010. And it was on the Stoke Park lawns in 2011 that Djokovic fine-tuned his grass game on his way to winning the Wimbledon title and the No1 ranking for the first time.

He returned in 2012 on went on to reach both semi-finals in SW19¬—The Championships and the Olympics. And he came back last year to prepare for his run to the finals—beaten, on that occasion, by Andy Murray.

And Djokovic is back again, making his only ‘competitive’ appearance between Paris and Wimbledon. For while the mood is light in this exhibition-style round-robin event, the tennis is taxing enough to stretch the sinews and heart-rate—and the grass is pristine enough to test both footwork and timing. Little wonder so many players leaven their Wimbledon training schedule here.

But no fewer than five of the best dozen men in the world will be here. Along with Djokovic on Thursday will be one of the most exciting young players to rise to the top of the game this year, No12 Kei Nishikori.

The opening-day schedule included two of the newest arrivals in the top 10: Milos Raonic—like Nishikori, aged 23—and the charismatic Ernests Gulbis, who broke the top 10 this month for the first time after reaching his first Grand Slam semi-final in Paris. After that run, and with two titles to his name this year already, he admitted that he was “addicted to success” after turning around his floundering results at the start of last year.

Gulbis’s self-proclaimed ambition is to become No1, and there are a plenty who would not bet against his achieving just that. He took to the pristine grass at The Boodles for the opener against Raonic, a feast of superb serving, net attacking, sliced backhands and great touch volleys—especially from Gulbis, who went on to take the match in two tie-breakers.

World No11 John Isner concluded the day against young countryman, the exciting 21-year-old Jack Sock, and it was the youngster who won a thriller, 12-10, in the championship tie-break.

Sandwiched between were No 18 Kevin Anderson against one of the undoubted stars of the future, the youngest in the top 100, Dominic Thiem. For a man who had played only his first senior tour grass match at Queen’s last week, the young Austrian, who stands at a career-high 56 from 139 at the start of the year, looked every inch the grass specialist.

Thiem serve-and-volleyed at every opportunity, used is Wawrinka-like single-handed backhand for cross-court passes and sliced returns, and made a lot of new friends at Stoke Park. But the towering Anderson edged the match in a second-set tie-breaker. The South African will return for more, this time the young gun Sock, in the third match at The Boodles tomorrow.

Also on show in the Wednesday schedule are No15 Fabio Fognini—and it seems guaranteed that this showman he will follow in Gulbis’s footsteps to enjoy some champagne-fuelled hugs from the front-row fans—and the elegant German Philipp Kohlschreiber.

Come back for photos and an interview with Ernests Gulbis tomorrow.