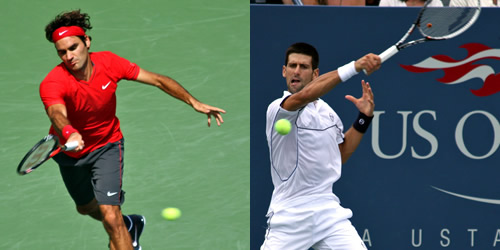 Roger Federer and Novak Djokovic are separated by just 75 points in the rankings Photo: Marianne Bevis

World No1 Roger Federer and No2 Novak Djokovic are separated by a mere 75 points in the rankings and top the seedings this week in the final North American Masters of the year.

On the line, though, is not just the prestigious Cincinnati title but the kudos of the top seeding at the US Open, which gets under way in a week’s time.

Federer and Djokovic have, for the moment at least, opened clear water between themselves and the two men who have shared the top four places at the last three US Opens, Rafael Nadal and Andy Murray. Now, with Nadal absent for the entire US Open series and Andy Murray falling early in the defence of his Cincinnati title, the spotlight could not be more intently focused on the battle at the top.

In their look, their bearing and their tennis, the top pair have certainly risen to the occasion. They are, perhaps, the most sharply turned out men in the tournament: crisp, white tops married to tailored shorts and coordinated footwear. Not for them the over-sized tees and ill-fitting leg-wear sported by some fellow competitors.

And looking every inch the professionals here to do business, they have played their way through the opening rounds with consummate coolness—no mean feat in the heat and humidity of this corner of North America.

Federer has spent just two hours on court, taking an hour apiece to dismiss first Alex Bogomolov Jr and then Bernard Tomic. In the first, the top seed won two-thirds of the points and fired off 12 aces; in the second he dropped just 13 points on serve throughout. He has faced only one break point in the tournament thus far.

Djokovic, too, has been kept on court for only two hours. Andreas Seppi took him to a tie-break in the opening set of his first match, but the Serb did not face a break point nor serve a single double fault. And in his second match, Djokovic had to play only six games before Nikolay Davydenko retired injured.

And so the battle towards that all-important final has reached the quarterfinals—and the stage at which the battle for ranking supremacy will begin to bite.

If both Federer and Djokovic reach the final, the Swiss is guaranteed the No1 ranking ahead of the US Open—extending the small gap to 95 points. But if Federer falls short of the final and Djokovic wins the title, he will reclaim the No1 spot that he conceded to Federer at Wimbledon.

The two of them face significant challenges, though Djokovic’s route to the final took on a happier complexion when his scheduled semi-final opponent, Murray, lost to Jeremy Chardy.

Djokovic also avoided an opening-match seed—Davydenko knocked out No13 Alexandr Dolgopolov—and saw the highest-ranked player in his quarter, Janko Tipsarevic, retire injured in his first match.

He faces, instead of Tipsarevic, the steadily improving Marin Cilic, seeded 12 and with 20 wins from his last 24 matches. The Croat, who did not rejoin the tour until the end of February this year due to injury, has reached three finals this season, winning titles at Queen’s and Umag. But although all six of his previous titles have come on hard courts, Djokovic has beaten him in all six of their previous meetings, most recently the Rogers Cup last year.

The semi-final holds the prospect of Juan Martin del Potro, back in the top 10 this year for the first time since his long absence following wrist surgery—and there is the worry. In a long and gutsy battle against Viktor Troicki, del Potro hurt his wrist before finally coming through in three sets to face Chardy in the quarters.

But if the big Argentine is fit, a semi against Djokovic is an intriguing match-up. Though 2-4 down in their head-to-head, del Potro has won the last two matches, most significantly the bronze-medal play-off at Wimbledon. But he will need to be at 100 percent to pull off the win again. If he isn’t, Djokovic will keep his half of the bargain for a mouth-watering final—as long as Federer can maintain his good form.

Federer’s quarterfinal poses Mardy Fish, clearly back to his 2011 form after his health scare this spring—and the courts of North America are where the serve-and-volley tennis of Fish thrives. He has twice reached the Cincinnati finals—though the last time, in 2010, he lost to Federer. However, the American has sailed through the draw, dropping no more than six games in any of his three matches.

The good news for Federer is that, if he makes the semis, the man who beat him last year, No5 seed Tomas Berdych, was beaten in the third round while the top seed in his half, David Ferrer, fell in the second. The bad news is that Federer may well face the best unseeded man in the draw, the young Milos Raonic who this week broke the top 20 for the first time.

And his game, like Fish’s, is made for the fast courts, as all three of his matches against Federer—all of them this year—have shown. This big-serving, big-hitting Canadian took the first set in every meeting, first in Indian Wells, then in Madrid and—in their closest and most recent match—in Halle.

Raonic is on the cusp of a major breakthrough, and has three excellent wins under his belt in Cincinnati already: Richard Gasquet, Marcos Baghdatis and Berdych. He has to beat Stanislas Wawrinka to earn another stab at Federer—but with four wins against a top-10 players already this year, Raonic should do just that on his ideal surface.

So Federer’s progress to the final is no given and, should he get there—and seal the No1 ranking for a little longer—there will still be much at stake between him and Djokovic.

A look at the honours board for the Cincinnati tournament tells its own tale: Federer has won here four times, Djokovic never—and the Swiss beat the Serb in the 2009 final. There is also the small matter of their particular rivalry. Federer took the No1 ranking from Djokovic after beating him at Wimbledon—his first win over the Serb in more than a year and only his second win since the end of 2010. And with New York beckoning, the rivalry takes on a particular intensity: For two straight years, Djokovic has narrowly edged out Federer in five-sets in the semis of the US Open.

All of which suggests that Federer will not simply be content to reach the Cincinnati final to preserve the top ranking. A win over Djokovic on the eve of the final Grand Slam of 2012 would throw down a significant gauntlet.