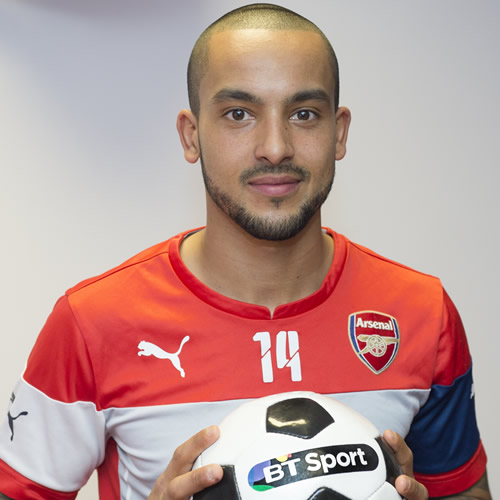 Theo Walcott has warned Arsenal against complacency ahead of Sunday’s FA Cup clash with Middlesbrough.

The north London side welcome the Championship outfit to Emirates Stadium as they look to book their place in the quarter-finals of the competition they won last year.

Arsenal were made to work hard as they stuttered to a 2-1 win over bottom-of-the-table Leicester City at Emirates Stadium in the Premier League on Tuesday night.

They’re going to be a good team, so you can’t take anything for granted

“I’m expecting very similar to the Leicester game – they’ve been doing very well in the Championship,” said Walcott in an interview with BT Sport.

“They’ve got a good balance between the way they attack and defend. They beat man city away from home, they’re going to be a good team, so you can’t take anything for granted. It’s the FA Cup, there’s always several shocks so we need to completely ready.

“The last game or two we haven’t started particularly well so we’re going to have to be completely ready because Middlesbrough are challenging to be in the Premier League next year. They are a big club, so we need to not take that for granted.”

Walcott, who missed the second half of last season due to a knee injury he picked up during the FA Cup third-round win over Tottenham last January, also lifted the lid on how he watched events unfold during May’s Wembley final, as Arsene Wenger’s men came from two goals down to beat Hull City 3-2 after extra-time.

He continued: “Even though I wasn’t there I was part of the whole setup from the start from the Spurs game which was probably the biggest fixture up till the final. It had been a long time since winning a trophy and when you go two nil down things might not happen for you.

“You’ve got to give credit to the players and everyone out there who dug deep and that’s why the FA Cup is special because it just shocks you at times, with the fact that four big teams went out a few weeks back, no one would have expected that at all.

“And with the final, no one would have expected Hull to go 2-0 up, so to be fair to them they gave a good game. It was a great watch for the neutral, not for me watching back at home, I was pretty nervous.”

Arsenal v Middlesbrough is exclusively live on BT Sport 1 from 15:30 GMT on Sunday 15th February, share your experiences of this year’s FA Cup on BT Sport by following #WeAreIn