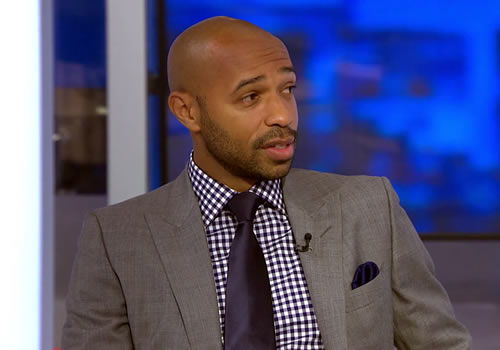 Thierry Henry questioned Arsene Wenger’s decision to replace Alexis Sanchez with Kieran Gibbs in the second half as Arsenal returned to winning ways with a 2-0 victory at Bournemouth.

The north London side took the lead in the 23rd minute when Mesut Ozil blasted into the roof of the net from close range after the ball fell to him in the box.

And Alex Oxlade-Chamberlain doubled the advantage for the visitors just a minute later, when he drilled a shot low into the bottom-left corner after being found by Aaron Ramsey.

Wenger brought Gibbs on for Sanchez in the 82nd minute, before giving Theo Walcott a brief run-out in stoppage time.

Speaking on Sky Sports after the final whistle, Henry said: “I think they’ve done enough, it was not a great performance.”

“The thing that will stay in my mind is that you’re 2-0 up, away from home against Bournemouth, we know that they have to win to catch Leicester, but Gibbs comes on for Alexis Sanchez.

“Why not give minutes to Theo Walcott? Why would you put Gibbs there?

“I know it’s not easy to make these kinds of decisions, especially when you need three points. But again, we’re going back to the same thing against Southampton at home.

“You’re trying to win a game, OK, you’re in a position where you’re winning 2-0, but the full-backs of Bournemouth of were going up a lot and Theo can run up and down.”

Sunday’s win left Arsenal, who are looking to win the title for the first time since 2003-04 in third place in the Premier League table and five points behind leaders Leicester City.

The north London side’s next game is a crunch clash against Claudio Ranieri’s Premier League leaders at Emirates Stadium on Sunday afternoon.