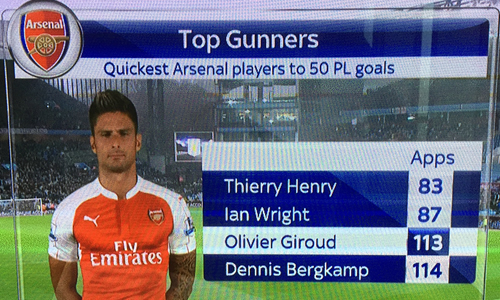 Thierry Henry has congratulated Olivier Giroud after the striker became the third-quickest striker in Arsenal history to hit 50 Premier League goals for the north London club on Sunday.

The French forward continued his recent fine form in Sunday’s victory at Aston Villa and confidently despatched Arsenal’s early penalty to give the Gunners the lead at Villa Park.

Giroud took 113 games to net 50 top-flight goals for the Gunners, with only Thierry Henry and Ian Wright achieving the feat in less matches.

And speaking on Sky Sports at half-time during Arsenal’s clash with Villa, Henry was full of praise for his compatriot.

Henry said: “It is some achievement to be able to do it before Dennis Bergkamp and also while not being the guy who takes the penalty every single time. Well done to him.”

Sunday’s win lifted Arsenal one point clear at the top of the Premier League table ahead of Leicester City’s clash with Chelsea on Monday night.

The Gunners, who have not won the title since 2004, return to Premier League action with a crunch clash against Manchester City at Emirates Stadium next Monday night.