Bencic is guaranteed at least a doubles silver to add to singles gold, but Djokovic leaves Tokyo empty-handed 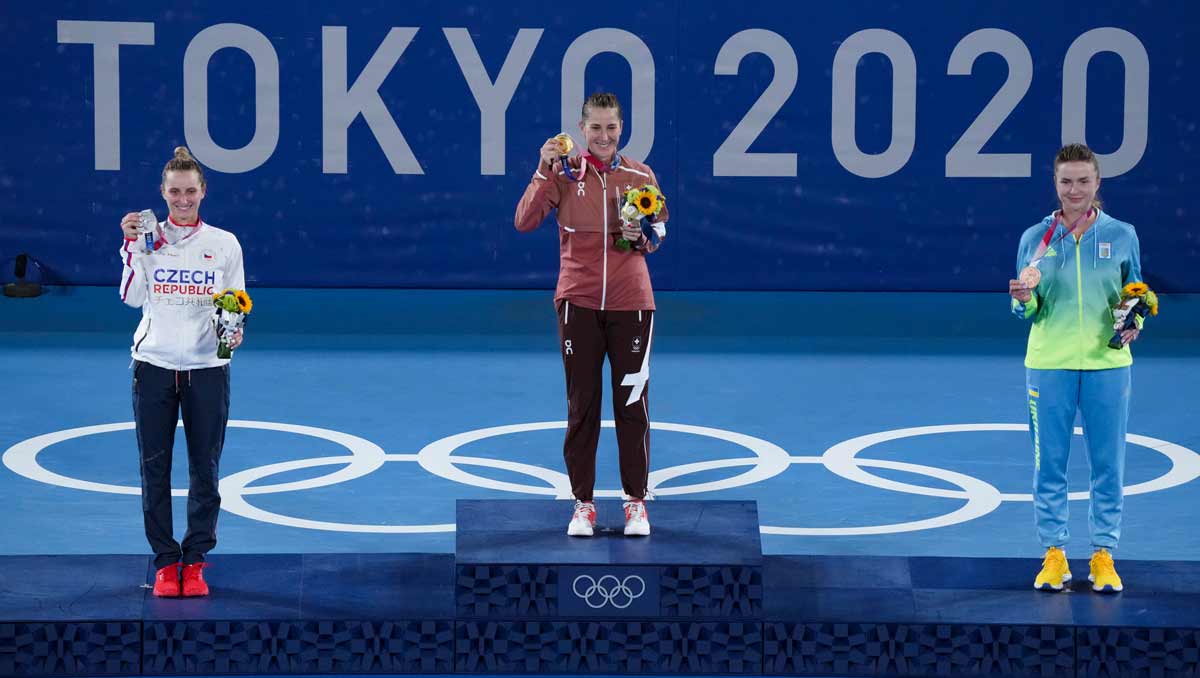 Belinda Bencic sealed the ultimate Olympic accolade via one of the toughest routes in the draw to claim the gold medal, beating Marketa Vondrousova, 7-5, 2-6, 6-3, in a two and a half hour thriller.

The Swiss star will have the chance to become the fourth player to win gold medals in both singles and doubles since tennis returned to the Olympics at Seoul 1988, following in the footsteps of Venus and Serena Williams and Nicolas Massu: She joins with Viktorija Golubic in the women’s doubles final, which will be played ahead of the men’s singles title match on Sunday afternoon.

Novak Djokovic was also in the running for two medals, but lost out on the gold/silver finals in both singles and mixed doubles, and then came up just short in the bronze medal match against Pablo Carreno Busta, losing to the Spaniard, 6-4, 6-7(6), 6-3.

The Serb later withdrew from the mixed doubles bronze match, citing exhaustion and a shoulder injury.

The 24-year-old Bencic, playing in her first Olympics, had been in outstanding form and impressive physical shape throughout the tournament. She needed three sets to beat current Roland Garros champion Barbora Krejcikova, another three to beat the Roland Garros runner-up Anastasia Pavlyuchenkova, and three more to beat Elena Rybakina. And it took yet another three sets to defeat the even younger giant-killer, Vondrousova, who had proved her mettle with wins over Kiki Bertens, Naomi Osaka, and Elina Svitolina.

For Bencic, the biggest title of her career has certainly been a long time in the making. She was the No1 junior at age 16, with two junior Majors to her name in Roland Garros and Wimbledon. She made her top-100 debut just after turning 17, and then her first big breakthrough a few months later with a quarter-final at the US Open. She won her first two WTA titles a year later, in 2015, including the top-flight Rogers Cup. She went on to make her top-10 debut the following year, still just 18.

Her surging fortunes were then undercut by injuries that resulted in wrist surgery in 2017, but by 2019 the resurgence was on with a US Open semi, WTA Finals semi, Indian Wells semi, and the Dubai title. Even so, this victory marks Bencic’s first title since Moscow 2019 after losing both of her previous finals this season in Adelaide and Berlin.

It will not propel up the ranks from her current No12—there are no points awarded in the Olympic tournament—but it will surely boost her confidence as she heads to her most successful Major to date, the US Open.

And earlier on Saturday, Svitolina beat Rybakina, 1-6, 7-6(5), 6-4, in the bronze medal match, coming back from 1-4 down in the final set to become the Ukraine’s first Olympic medallist in tennis.