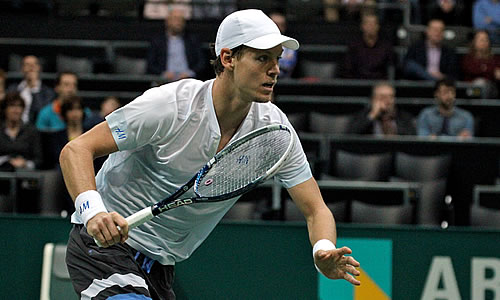 The first 500 tournament of the year in Rotterdam has boasted some of the greats among its champions in its 40-year history: From Bjorn Borg, Jimmy Connors and Stefan Edberg in the first two decades to Boris Becker, Roger Federer, Andy Murray and Juan Martin del Potro in the 20 years since.

Those last two champions began this year’s high-quality draw as the top seeds, but neither arrived at the very peak of their form.

Murray was in search of more match-play to fine-tune his return to the tour after three months’ absence following back surgery. He had not made his life any easier by globetrotting from the hot outdoors of the Australian Open to the clay of San Diego and then trans-Atlantic—with a brief stop-over in a saturated London—to the hard indoors of Rotterdam. Such drastic changes in time-zones and surface are tough even for the very best in this sport.

Del Potro was newly returned from treatment to a troublesome left wrist that had dogged him since the Australian Open. He admitted that it was still far from healed, that he had lost muscle in his left arm from his time away from the courts, that he was glad of a Wednesday start to try and build on his fitness.

Sure enough, both Murray and del Potro, two of only three seeds in the quarter-finals, fell in straight sets, and that left just one seed—though arguably one of the favourites for the title—Tomas Berdych.

The big Czech man was a hot tip from the start, not only because his form in 2013 was at such an unwaveringly high consistency but also because, now aged 28, he continued, point by point, to improve both fitness and successes.

A top-10 player since 2010, he achieved a career-high No5 last August after reaching the quarters or better in 15 of his 23 tournaments. With his best-ever semi finish in this year’s Australian Open, he also became one of a rare club to have reached at least the semis of all four Grand Slams.

Add to this record the last two Davis Cup titles—in which he played both singles and doubles rubbers—and you have one impressive resume.

All the more surprising, then, that despite three finals last year, Berdych had not won a title in 18 months, the only top-10 players in 2013 not to lift silverware. Not that it seemed to dent his confidence or the sense of calm that has become such an feature of the last year or so.

He talked of the boost he got from seeing fellow-28-year-old Stan Wawrinka break through to Grand Slam success and into the top three:

“It’s something that Stan showed and proved: It’s possible to win a Slam, it’s difficult, but it’s possible. Gives me hope, new belief that we others can do the same if we work hard, other things click together—you can make it in the end. It’s not only about maybe two or three guys: The top 10 is extremely equal.”

He also talked of both the mental and physical durability that have brought their rewards:

“If you feel good mentally, then the tiredness of the body goes away easier.
Mentally I feel good after keeping winning, that helps you keep the body really fresh and positive. I take care of myself, doing all possible things I can to feel good and be always prepared.”

Another area of his game that has improved this season is his serving. Indeed a look at the ATP stats for 2014 thus far make interesting reading: Top for first serve points won; top for service games won; top for break points saved. He revealed something of his secret after dropping his only serve in 43 games on his way to beating Jerzy Janowicz:

“One of the few things I had the time to work on [in my off season] was my serve so I’m glad this was successful and a good choice. But it’s also about the mental preparation for the serve, even before the serve… and a mix of other things.”

Whatever those ‘other things’ were, they and that mental fortitude stood him in very good stead in the 20th final of his career.

Although his opponent, Marin Cilic, was not seeded in Rotterdam, the tall Croat was a former top-10 player, and regaining his best form with a re-modelled serve courtesy, perhaps, of his new coach, the former Wimbledon champion Goran Ivanisevic. Cilic, playing in his 19th final, won the Zagreb title last week and topped the season’s aces count with a remarkable 145. What’s more, he had beaten two top-10 players to reach the final: Jo-Wilfried Tsonga and Murray.

Cilic began strongly enough to hold the opening game, while Berdych struggled to find his range. In the second game, the Czech went 15-40 down, levelled, saw two hawk-eye calls go against him and then, on game point, the ball burst and he had to replay the point. He went down another break point before finally, after more than 10 minutes of trying, holding serve.

That seemed to settle Berdych, and this time it was Cilic who suffered some ill fortune—a volley just clipped the net and bounced back to bring up break point. A netted backhand from the Croat and Bercych took a 2-1 lead.

Both then began to serve closer to their respective high levels: Indeed two of Cilic’s games took under a minute to complete. But he could not work a single break point, and Berdych served out the set, 6-4, in 46 minutes.

As the match went on, Cilic was increasingly unable to stay with the pace of his opponent, surely the result of back-to-back finals. He could not find the zip that had opened up Murray’s tennis for the kill, while Berdych generated flat power off both wings, cross-court and down the line.

The big, athletic Czech relaxed into his preferred aggressive style of play, and quickly took control with some penetrating shot-making, and broke in the opening game of the second set. He would drop only three points on serve in the set, while a weary Cilic double faulted to concede another break. That was an open invitation for Berdych to serve out the match, 6-2.

This victory, his first 500 title since Beijing in 2011 and his first of any type since Stockholm 2012, will do much to bolster the Berdych campaign at the next 500, too. Berdych was a finalist in Dubai last year, beating Federer before losing to Novak Djokovic.

Before that, however, Berdych can enjoy at least a fortnight back at No6 in the rankings, having overtaken Murray with the Rotterdam title. Both achievements have been hard earned, hard won and thoroughly deserved.