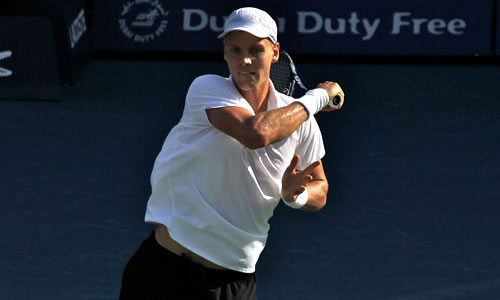 It’s mid-week at the Dubai Duty Free Tennis Centre, and the 32 men who began the journey towards a share of the $2m prize money and the valuable rankings points on offer at this award-winning ATP 500 event, are down to 16.

Shoehorned into just six days, it meant that all 16, in eight top-class singles matches, had to be fitted into the most packed day of action. It meant, too, that the Centre Court would be treated to all four of the top seeds back to back, ranked seven or above in the world.

It also meant that four matches—including the Nos 7 and 8 seeds—would spread the fun to the outer courts where the seats were free. Mikhail Youzhny and Andreas Seppi led the play on Court 1, followed by the man who beat Jo-Wilfried Tsonga, Michael Llodra. And a few metres along, on Court 3 at the same time, the eighth second-round match featured the surprise match-up of Nikolay Davydenko and Victor Hanescu.

But despite these tempting attractions, most attention focused on the two big men of the tournament, No3 seed Tomas Berdych and No4 seed Juan Martin del Potro.

They reached their second matches via very different paths. The Argentine needed two and a half hours to get past a Marcos Baghdatis in top form, saving three match points in a tight final-set tie-breaker. Berdych, though, cruised through in 54 minutes for the loss of only four games, showing no signs of his long final against Tsonga in Marseille just two days before.

His opponent, the No90-ranked Tobias Kamke of Germany, had survived a three-setter in his main draw debut in Dubai to get this far—better than in his previous two events, Zagreb and Rotterdam, where he lost in the opening rounds.

They had met just once before, more than four years ago, though Kamke won, and he showed early signs of doing the same in Dubai, working two break points against Berdych’s two first serving games.

The big man from the Czech Republic resisted and converted his first opportunity in the sixth to lead 4-2, but at the seventh attempt, Kamke did break to level things again. Immediately, he went 0-40 down and after a lengthy injury break to treat a twisted ankle, lost his serve and it looked as though Berdych would roll on. He didn’t.

Kamke broke once again, defending set point, and then held serve through two break—and set—points. Almost an hour in, and they were still locked at 5-5.

But now Berdych began to crank up his formidable serve, and held to love. It was down to Kamke to hold back the tide and he did so through six deuces and four break points but there was a certain inevitability about the outcome: Berdych took the decisive lead, 7-5.

He became increasingly dominant in the next set, breaking at the first attempt, running to a big lead and finally serving out with ease, 6-1.

He explained that the switch from indoors to the Dubai’s windy, hot conditions was very difficult, “I wasn’t playing my best game, but I did just enough to win in two sets…It’s the same for everybody, so I need to hurry up and get used to it.”

The transition may also explain the plethora of break points each man faced—a total of 27—but it was Berdych who converted five of his against Kamke’s two. One thing’s for sure, the Czech is certainly looking very strong and fit, and must be a hot favourite to beat the winner between the lowly-ranked Michael Llodra and Dimitry Tursunov.

There was a lot of local interest in the match that followed, a first meeting between Del Potro and the Indian Somdev Devvarman.

The popular Argentine had talked of tiredness and a sore wrist—though he assured the press that his doctor had cleared him to play—after a heavy indoor schedule: He won in Rotterdam and played two matches in Marseille.

However the 28-year-old Devvarman, who missed seven months last season due to a shoulder injury, was here on a protected ranking of 85.

Surprisingly, it was Devvarman who threatened first, holding serve and then going 40-0 on Del Potro’s first serve. He could not convert, and the Argentine struck in the very next game to break at the first opportunity and held that lead through to a 6-4 set.

The second set was very similar, Del Potro with a quick break that he held through to another 6-4 conclusion.

The slight Indian man put up a spirited fight, but in truth, few will remember the match as much as the aftershow: Diego Maradona, a big tennis and big Del Potro fan, was back in Dubai and jumped at the chance to join his fellow Argentine on court. 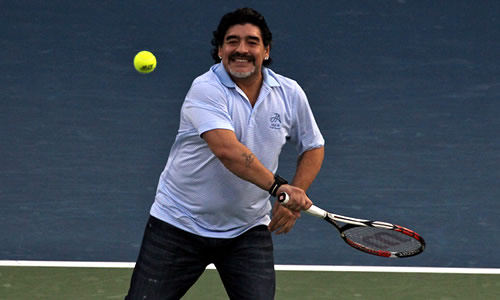 He had to stand on a player’s seat to reach for their embrace but then enthusiastically took to court for some extra entertainment.

A few serves received on the forehand and backhand and even with a volley, he then kicked a few balls into a cheering crowd. Del Potro eventually left him to it—Maradona was the star of this particular after-match interview, and Del Potro had press, ice baths, physio and more to do in preparation for tomorrow’s match.

That would be against German qualifier Daniel Brands, who took out the seeded Youzhny in straight sets. Fellow seed Seppi, though, won through in two tough sets, 6-4, 7-6.

Elsewhere, the form of Davydenko continued apace with an impressive win over Hanescu that throws up the prospect of a 21st meeting with Roger Federer—and the last time the Russian beat him was in the near-identical conditions of Doha in 2010. He also ran Federer very close in Rotterdam a year ago.

In the form Davydenko is showing, a battle between the 31-year-olds could be a fascinating encounter.