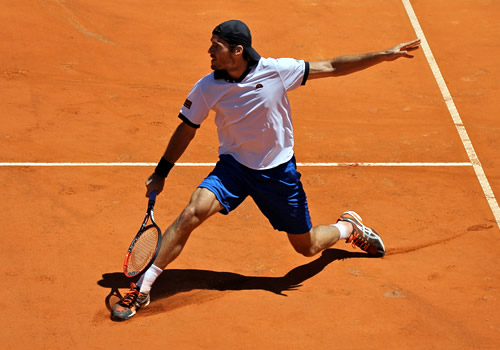 Tommy Haas’ management company has revealed that the popular 36-year-old former world No2 is to undergo urgent surgery on his right shoulder.

Owner of 15 titles from 28 finals, the first win coming 15 years ago in Memphis and the most recent in Vienna and Munich last season, Haas confirmed that he will travel to New York tomorrow [Tuesday] for an operation that will be performed by Dr David Altchek at the Hospital for Special Surgery.

His recovery and rehab is likely to take upwards of eight months, so the current world No20 will miss the rest of the 2014 season and a significant part of next year’s early hard-court swing.

The charismatic German, famed for his single-handed, all-court, attacking style of play, has been struggling for much of the season with the right shoulder that takes the brunt of the stress in his game. He was forced to retire from his first-round match at the Australian Open before reaching the final of Zagreb on his return three weeks later.

He retired again in the semis in Sao Paulo at the end of February and, after modest runs through the intervening tournaments, pulled out mid-way through his quarter-final at the Rome Masters. The biggest blow came a week later at the French Open: He retired in the first set of his opening match and then withdrew from Halle last week without playing a point.

He explained to the ATP World Tour website: “It’s been a struggle since the beginning of the year obviously, and I’ve already had to retire in matches, which is never fun. Last week I had to take another MRI after Paris because it was a severe thing I felt again in the shoulder. Unfortunately it’s an injury I’ve already had before that was fixed, but my sub-scapular tendon is torn again.

“It’s a big step backwards in a long process, but I want to hopefully come back again at some point and finish my career on my own terms when I’m ready for it. I’ll try everything I can.”

This is certainly a major setback for Haas: He has undergone surgery on the same shoulder three times before, in December 2002, July 2003 and November 2007, but the scan revealed that no fewer than three tendons have been damaged, so surgery is the only option. He added:

“The diagnosis was a real shock for me but a surgery can’t be avoided because the injury is very serious. I don’t want to retire from the tennis stage with an injury but would like to end my career on the court. I’m still totally convinced I’ve good matches and tournaments ahead of me as long as the shoulder operation proves to be successful and my body plays its part.”

Haas has suffered a catalogue of surgeries and injuries on top of the numerous shoulder problems. Even before he joined the senior tour, he had received surgery to mend breaks in both ankles.

After winning his first title in 1999, he entered the top 10 with his first Masters title in 2001, but the shoulder and wrist problems were already appearing. He missed part of 2002 and the whole of 2003 for surgery, and along the way supported his parents after they were involved in a serious accident.

2004 brought Haas’s first comeback, a surge to No17 and the ATP Comeback Player of the Year Award. But then came a twisted ankle, a wrist injury and another shoulder problem—and a long slide in the rankings. After another comeback and his first title in two years in 2009, he was hit by right hip surgery and, a month later, right elbow surgery.

He fought his way back to fitness once again in 2012, rising from 169 to No18 as he reached the third round at Roland Garros—having come through qualifying—beat Roger Federer to win the Halle title, reached the finals in Hamburg and Washington and claimed another ATP Comeback Award.

2013 showed little let-up in Haas’s desire to play, either. He reached the final in San Jose and the semis in Delray Beach, and in Miami he enjoyed a semi run via Novak Djokovic. More strong showings took him back inside the top 12 and he remains the oldest man in the top 100.

Thus far, Haas is a player for whom age and injury seem to have been nothing but incentives.

He said last year during his Miami run: “I would like to go out on my own terms. I’ve had some injuries, recently my hip, I didn’t even know if I was going to come back. Had a lot of lower back problems, some multiple knee problems, even a year ago. But since last year, I’ve been healthy and been able to get back into shape and play some good tennis again. When you win a title against Roger Federer in front of a German crowd, you try to see if you can do that one more time somewhere. That’s my goal.”

Haas, a four-time Grand Slam semi-finalist, revealed a little of his rehab plans after this latest setback.

“What I would do is try to get on the court a little early and play left handed. Just to move around a little bit and stay active physically. It will probably take at least three to four months before I can slowly start hitting again with my right arm. There’s no reason to rush it. Hopefully the surgery will go well and the rehab and we’ll go from there. You have to be patient.”

His many fans will undoubtedly remain patient for as long as it takes—as long as the comeback king of the tour can make one more full recovery.