Toronto Masters 2014: Novak Djokovic is facing a tough road if he is to claim his 20th Masters title 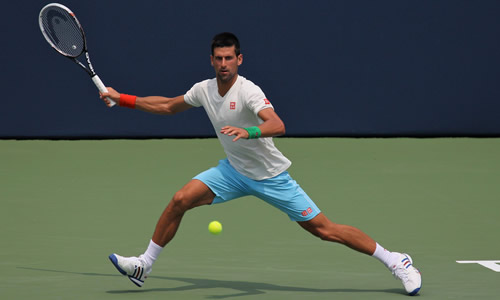 The Canadian Open, which launches the second North American hard-court swing of the season in Toronto this weekend, is one of the oldest tournaments in tennis. Indeed only Wimbledon and the US Open pre-date it.

And in keeping with its prestige and history, it boasts a plethora of previous champions, although in a last-minute blow, the defending and three-time champion Rafael Nadal was forced to withdraw with a wrist injury.

However, the other three men who have dominated the Rogers Cup in the last 10 years—who also happen to comprise the other three of the ‘big four’—are present and correct. Andy Murray and Roger Federer have each won twice, while the world No1, Novak Djokovic, has won three times.

All three are making their first appearance since the grass season climaxed at Wimbledon—where Djokovic edged Federer in a scintillating final. And all three have outstanding records on hard courts: all are multiple titlists in American Masters and all are former US Open winners.

Little wonder, then, that Djokovic was not the happiest man in the room at the tournament’s ceremonial draw. “Terrible” was his word, and not just because No8 seed Murray happened to fall into his quarter, though they have split their eight meetings in North American Masters right down the middle, with Murray winning their only contest in Toronto.

No, Djokovic’s heart must have sunk with each name drawn: His third-round seed is Jo-Wilfried Tsonga, and after Murray is a potential semi-final against the other reigning Grand Slam champion in the draw, Stan Wawrinka—who famously took the Serb to five sets in their last three Major matches, beating him in January at the Australia Open.

Not that Wawrinka is a given, for in his quarter is the Wimbledon semi-finalist Grigor Dimitrov, who took Djokovic to a testing four sets, and another talented name to break the top-10 this season, Kei Nishikori.

Should Djokovic circumvent all of them, he is seeded to meet Federer for a 36th time, and they are separated by just one win in Federer’s favour.

So the draw, even without Nadal, will test the Djokovic resolve. But even so, the Serb is in the midst of what he admitted, in the Montreal Gazette, was “Probably the best month I’ve had in my life, with the Wimbledon title, with my wedding [to long-standing fiance Jelena] and of course a baby coming up.”

He added: “I’m going back to the business, back to my office, but of course filled with positive energy, with joy, all the beautiful emotions that a person can experience right now. Hopefully I can use that to perform well on the tennis court.”

It’s not as though he needs any more incentive, then—and one might recall Federer at a similar stage of his career, riding the wave of marriage and fatherhood in 2009 to back-to-back titles in Madrid, Roland Garros and Wimbledon, and then winning the Cincinnati title as well.

However the Serb does have another spur: to join Federer and Nadal as the only players to reach 20 Masters titles. He would love to do it here, of course: And he would surely love even more to equal Federer’s 21 titles by winning the next tournament in Cincinnati, thereby becoming the only man to bag the complete set of Masters.

But this tournament comes hot on the heels of surging runs up the rankings by a fresh set of ambitious players: Dimitrov and Milos Raonic both reached the Wimbledon semis, while Nishikori and Ernests Gulbis began to put together deep runs at bigger events, and the young Nick Kyrgios and Dominic Thiem have continued to break new ground in the last couple of months. There is a chance, then, for one of an exciting band of new players to make their mark. So will it be an old familiar face lifting the Rogers Cup or, for the first time in a decade, a man who is not one of the ‘big four’?

NB The Canadian contingent at their home tournament has rarely looked in better shape. The draw is spearheaded by No6 seed Raonic, currently enjoying a career-high ranking of No7, and he is backed by Vasek Pospisil, not only the Wimbledon doubles champion but, like Raonic, a semi-finalist at this Masters last year. By happy coincidence, the two will meet in the first all-Canadian ATP final in Washington this weekend.

It is not just in the latter stages of the 56-man draw that things are testing for the top seed: He starts against the winner between Radek Stepanek and Gael Monfils. The latter, plagued time and again by injury, reached the quarters at Roland Garros before missing Wimbledon. He’s a former No7, currently 22, and when at this best is athletically dangerous. Veteran Stepanek is a former No8, currently 35, and with the kind of serve-and-volley game to disrupt even the best.

Indeed it’s a segment packed with talent: Federico Delbonis won his first title this year, while former No5 Tsonga is a Grand Slam and World Tour Finals finalist, though has been below par of late.

A Djokovic-Murray quarter-final promises fireworks—the two contemporaries have played some classics over their long rivalry and both are former Canadian champions—but Murray first has to negotiate just as challenging a segment as Djokovic, one that includes a stand-out first round between Pospisil and Richard Gasquet in a repeat of this weekend’s Washington semi.

Gasquet has twice been runner-up in Canada, too, most recently here in 2012, and could face Murray in the third round. The Briton’s first match, though, may be against the exciting 19-year-old Australian, Nick Kyrgios, who burst through to the quarters of Wimbledon this year.

And all that is just in the top quarter. Venture into the second quarter and there is Wawrinka, who looks to have a reasonable draw as far as the quarters—Fabio Fognini is the next highest seed—before having to take on, most likely, the survivor of a third-round barnstormer between Dimitrov and Nishikori.

That said, the Japanese man first faces the considerable craft of Philipp Kohlshcreiber, then either fast-improving Thiem—finalist in Kitzbuhel this weekend, and a man with a power game suited to these hard courts—or former top-10 Gilles Simon.

It was, perhaps, telling that Djokovic and Wawrinka practised with one another for more than an hour on Centre Court, bearing in mind the battles they have had over the last 18 months. Wawrinka’s form since winning in Melbourne has been patchy but here he is back on the kind of courts that should produce his best. The Swiss certainly looked impressive on both serve and off the ground—an early taste, perhaps, of what could be a pulsating semi-final in Toronto.

If there is one man who can match Djokovic for off-court highlights this year it is the second seed Federer. Not content with reaching the finals of Wimbledon, Monte Carlo and Indian Wells, claiming the Dubai and Halle titles, and winning more matches—40—than anyone else in the draw now that Nadal is not playing, he became the father of a second set of twins just three weeks before reaching the fourth round of Roland Garros. And that in a season that began with new coach/mentor Stefan Edberg and a new racket.

He turns 33 during the Rogers Cup, yet seems as fit and enthusiastic as ever and, should he win in Canada, it would mark his 80th title. What’s more, the draw could work in his favour, packed as it is with tall, big-serving men.

That challenge begins with the huge Jerzy Janowicz, assuming the Pole beats Polansky. The third-round is most likely to deliver Marin Cilic, who has been on a great streak of form this year, then the quarters should deliver either No5 seed David Ferrer—who has lost all 14 of his previous matches against Federer—or the tall Atlanta champion John Isner. And once at the semis, Federer has every chance of facing another big man in Raonic or Tomas Berdych.

But Federer is renowned for his ability to pick up fast serves and defuse them: He has yet to lose to Raonic, Cilic or Janowicz and has lost only once to Isner—on clay. Should it be Berdych who comes through the third quarter, however, he has given Federer problems in the past, though the Swiss won their last match, this year’s Dubai final.

Raonic will come late to his home tournament due to his streak to the Washington final, and although he is improving all the time under the guiding hand of Ivan Ljubicic, it is a big ask to reach a Berdych quarter face-off, as he has the formidable Gulbis as the next seed in his segment, and another youngster making a summer surge, Jack Sock, in a possible opening match.

Players in Berdych’s way include recent winner of two titles, Roberto Bautista Agut, while Lleyton Hewitt, another winner since Wimbledon, sits in Raonic’s segment, and is always capable of upsetting the apple cart.