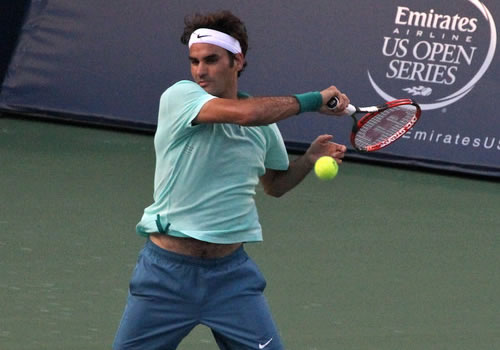 As if there had not been enough drama for one day, the Rogers Cup saved the best and most nail-biting for last.

By rights, the No2 seed and two-time former champion, Roger Federer, should have been given an easy time of it.

Aside from the fact that the tournament bears his name, and that all but a tiny segment of the Toronto crowd is firmly behind him, the next day would dawn his birthday. But the schedule, which had launched him first onto Centre Court on Tuesday, delayed him to the very end of the third-round Thursday.

He took to court just a little before 9pm on the coldest night of the week, a chilly, breezy evening, and far from his favourite playing conditions.

He also took on the formidable Croatian Marin Cilic, currently ranked 18 but a former No9, and climbing strongly on the back of one of his best seasons. Cilic started the year with a bang, winning Zagreb and Delray Beach and beating both Jo-Wilfried Tsonga and Andy Murray to reach the Rotterdam final.

As if to reinforce the improvement in his game since taking on his childhood hero, Goran Ivanisevic, as his coach last year, he also took Novak Djokovic to five sets before losing in the quarters of Wimbledon. He had not beaten Federer in four previous matches, but then they had not met since 2012.

And as the match unfolded, it was clear that Cilic had stepped up his tennis since the last time. Federer had a chance to break in the opening game, but did not convert and found himself in a real battle of flat hitting, impressive and accurate serving, and was offered very few mistakes from the Croat’s racket.

Federer himself had to fight off a break point in the sixth game, but this would go a tight tie-break. Federer got his opening when a Cilic forehand clipped the net for Federer to kill it for match point. The set was his, 7-6(5).

The second set was even tighter, as Cilic probed and resisted with some very clean and consistent hitting. But it looked as though his number was up when he served at 4-5 and Federer had showed every sign of breaking for the match. It was edge-of-the-seat stuff for one of the longest games of the tournament: 11 deuces and six match points to the Swiss.

But Cilic showed great resolve, and some very fine second serving, to force errors from Federer. He saved the first match point with a remarkable reflex volley that, nine times out of 10, would have gone wild, but this one did not.

A couple of times, the Swiss had the match on his racket, having worked the point for an easy put-away. On one, he had ghosted in for a straightforward volley, only to net it.

By now the arena was almost boiling over with excitement—and Cilic earned, and got, plenty of support for his courageous play under such pressure.

The quietly spoken Croat withstood it all and allowed himself a rare fist-pump—and quite rightly. As is so often the case after coming through a battle, he was strengthened by its heat, served to love to take it to a tie-break, and sailed to the set with ease, 7-6(3).

Time for a breather—and many, along with Federer, left for just that—but all were back in place for the conclusion. This one could go either way, especially as Cilic’s level showed no sign of dropping and Federer struggled to make headway on his opponent’s second serve.

But the chance did eventually come once again, at the same stage of the match, the 10th game. Cilic, this time serving first, was broken on the second attempt. Federer sensed the kill, fired down two aces, made a forehand winner, and saw a rare error from Cilic go long to seal the match, 6-4.

By the time Federer came to press, he was 33 and had enjoyed some birthday cake in the players lounge. Good enough reason to be relaxed, even at that late hour, but he admitted it had been a tense match.

“Nerve wracking. Look, it’s nice winning those kind of matches, because I also lost a bunch in my career, you know. Especially this season I have lost some closer ones, especially in the stretch from Indian Wells, Miami, Monaco, Rome, Paris.

“So from that standpoint I’m very happy I came through tonight. I thought Marin played really well, especially for longer periods, as well.”

Federer next plays an old adversary—David Ferrer is still only 32, and has lost to Federer in all 14 of their previous matches—but Federer is not one to underestimate a gutsy opponent: witness Cilic.

“Well, it’s going to be a completely different type of match. Against Ferrer the rallies are different. It’s less on one two punch play, which Marin does really, really well. Take a step in and he’s inside the baseline and goes the other way. Can really take a lot of time away.

“David can do that too, but his serve is not as big. His first shot might not be as big, but then he is obviously an unbelievable retriever, has some of the best second serve returns in the game. If I don’t play well, it’s one of those guys that you’re not going to come through.

“I’ve got to play different as well a little bit. There are a few adjustments I need to make in a short bit of time here, but I hope I can find a way.”

Toronto will also hope he can find a way a little faster: He may not relish entering the semis with two post-midnight finishes under his belt.

But while Federer did not quite provide the concluding upset of the day in Toronto, Feliciano Lopez obliged.

The unseeded Spaniard, another 32-year-old who refuses to go away, came back from a set down against the No4 seed Tomas Berdych to reach the quarters after almost two hours, 3-6, 6-3, 6-4. The powerful serve-and-volleying left-hander will now take on the serving power of home favourite, Milos Raonic, who beat Julien Benneteau in three sets. But when it comes to aces, Lopez leads Raonic 36 to 30. It should be some contest.