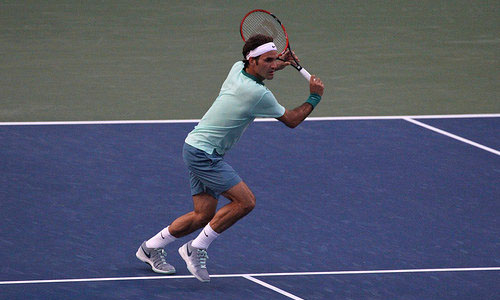 Two-time champion Roger Federer, playing in the Rogers Cup for the first time since 2011, got off to a flier to claim the first spot in the third round, after beating the 129-ranked Canadian Peter Polansky, who had put out the powerful Pole Jerzy Janowicz.

It took the Swiss, aiming to win his 80th title and 22nd Masters, just 52 minutes to dismiss his opponent, 6-2, 6-0, and he afterwards feigned some embarrassment at his ruthlessness.

“On the courts you’ve just got to block it out and just get it done, you know. You never know when it can shift. It’s all happened before, you know. You feel a little bad, and then you end up losing the match!”

The next man into the last 16 was Federer’s compatriot Stan Wawrinka, though he did not have anything like as easy a job against the talented but often wayward Benoit Paire. There was some pride at stake, too, since the Frenchman had knocked Wawrinka out in the first round of the Rogers Cup last year.

Paire looked like causing an upset again when he took the first set, 6-4, only to see Wawrinka level, 6-3. Each broke the other in the final set, with the Swiss fending off a match point before sealing victory in a tie-break, 7-6(2) after more than two hours.

But that would be the closest thing to an upset on a second day that threatened to be washed out by rain once again. But the showers that halted play before it had even started soon disappeared. Sadly for the Canadian fans, most of their home hopes also disappeared, too.

The most prominent of the squad to go was Vasek Pospisil, who had enjoyed just 24 hours to recover from three matches in two days on his way to the final of the Washington 500 at the weekend. There, he had beaten Richard Gasquet, but hampered early on here by a leg strain, the world No27 this time lost out to Gasquet, 7-5, 7-5, having fought back from 1-4 down in the second set.

The 12th seeded Gasquet acknowledged that Pospisil was not at his best: “The difference was I think he was a little bit tired. He was in the final, it’s never easy… He plays well, he’s very talented, very powerful, so he’s a big opponent for me, it’s a big win for me.”

The Frenchman, who has twice been a runner-up in Toronto, will face the huge Croat, Ivo Karlovic, who also avenged a recent defeat by coming back from a set down to beat Bernard Tomic, 3-6, 7-6(5), 7-6(6). Tomic beat Karlovic in Bogota last month to claim the title.

By the time the day was done, two more Canadians had bitten the dust, as Donald Young beat Frank Dancevic, also from a set down, and Andreas Seppi beat qualifier Brayden Schnur.

That leaves Milos Raonic to carry the maple-leaf flag, and he will headline Wednesday’s evening session against Jack Sock, who continued his winning ways against Jurgen Melzer, 6-1, 6-3, in under an hour.

The 21-year-old American, however, was disappointed in the doubles competition when partner, Pospisil, pulled out. The duo had high hopes here after storming to the Wimbledon title in their debut pairing and then claimed the Atlanta title a fortnight ago.

The winner between Raonic and Sock will take on the charismatic Ernests Gulbis, who has soared into the top 10 for the first time in his career via a first Grand Slam semi-final at Roland Garros. He had no trouble against Joao Sousa, 6-3, 6-4, firing 16 aces in under an hour and a quarter of play.

There was more success for the French in the shape of Gael Monfils, who advanced past the veteran Radek Stepanek, 6-4, 7-5, to set up a meeting with the top seed Novak Djokovic. Gilles Simon battled back to beat 20-year-old Dominic Thiem 3-6, 6-4, 6-0.

Perhaps the most exciting win of the day—though after his breakthrough at Wimbledon last month, not too much of a surprise—was Nick Kyrgios’s victory over Santiago Giraldo in his first match since that quarter-final in London.

The 19-year-old showed real maturity in coming back from a break down in the first set, and will surely not be fazed by next facing the two-time former Rogers Cup champion, Andy Murray. This exciting young player did, after all, take out Rafael Nadal at Wimbledon.

He relishes the challenge: “He’s a great player, and I’m just going to go out there and enjoy the experience to get to play another player like that. I will hopefully serve well and keep it on my racquet and do the best I can out there.”

The two men open proceedings on Centre Court before Djokovic begins his campaign for a fourth Canadian title.