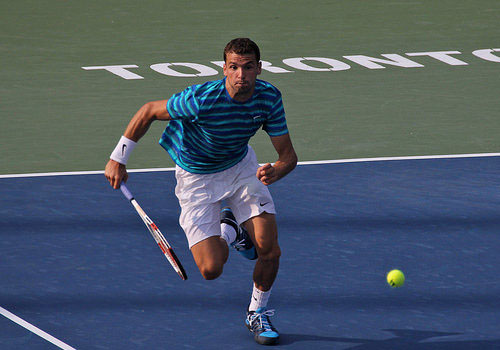 It was a day of matches to make the mouth water, and the day when—weather permitting—14 men would join the Swiss duo of Roger Federer and Stan Wawrinka into the third round of the Rogers Cup.

Andy Murray made quick work of sailing through Nick Kyrgios but Novak Djokovic—three times a champion here—made rather heavier weather of it, becoming the first man of the day to stack up what would become a huge tally of tie-breaks.

Djokovic started well enough but then the charismatic Gael Monfils, a showman to his fingertips, turned on the tennis and the crowd with some scintillating shot-making to level the match in a tie-break. And it would take another 7-6 set, this time to Djokovic, to seal the win.

So the world No1 remains on track for a 20th Masters title, but he must first play another flamboyant and popular Frenchman. Jo-Wilfried Tsonga added to the tie-break tally with his opening set but then dispatched compatriot Jeremy Chardy, 6-4, in the second.

And Murray, in what Djokovic dubbed “a terrible quarter”, will take on one more Frenchman of considerable artistry. Richard Gasquet, producing one of the seven three-setters that packed the day, had a mountain of a task in the towering Ivo Karlovic but eventually got the better of the Croat after almost two hours, 5-7, 7-6, 6-3.

That made one single-handed backhand into the last 16: Many more would follow.

The next quarter, which will produce the other top-half semi-finalist come the weekend, saw the rangy South African, Kevin Anderson take out No16 seed Fabio Fognini, 7-5, 6-2, to set up a meeting with Wawrinka—single-hander No2—and below that will come a clash between two more owners of that old-fashioned and particularly elegant backhand, Tommy Robredo and Grigor Dimitrov.

The young Bulgarian, riding at a career-high No8, found himself involved in an unexpectedly tough three-setter with Donald Young, but he prevailed 4-6, 6-2, 6-3. He will now play a man almost a decade his senior in Robredo, who picked up the No17 seeding after Kei Nishikori was forced to pull out of the tournament,

The Spaniard, one in yet another repeating pattern in the last-16 line-up, is one of three 32-year-olds from his country, though he looked eminently spritely in picking off the not insignificant Gilles Simon, 7-5, 6-2.

The next segment produced mature Spaniard No2 and one-handed backhand No5 in the imposing left-handed serve-and-volley package of Feliciano Lopez. Having already dispensed with the seeded Roberto Bautista Agut in the first round, Lopez this time took out the qualifier Tim Smyszek, 7-5, 6-4.

A rather bigger task would lay ahead: No4 seed Tomas Berdych was expected advance easily, but not to be outdone on this long, long day, he lost the first set in a tie-break to Yen-Hsen Lu.

Home hero Milos Raonic, riding a career-high No6 in the rankings, only just made it past the talented Jack Sock—and yes, as is so often the case when it comes to the big-serving Canadian, it took tie-breaks: 4-6, 7-6, 7-6. He will face one more Frenchman, and another veteran, Julien Benneteau, the surprise winner over No11 seed Ernests Gulbis, 7-6, 6-3.

And so to the last quarter, the one that had seen the one-handed backhand of another member of the “32 club”, Roger Federer, already sail through as No2 seed.

Federer will leave that club in two days’ time, when he turns 33, but before that, he will play the tall, in-form Marin Cilic who was one of the many to need a third-set tie-break to advance past Malek Jaziri, 4-6, 6-0, 7-6.

The winner between Federer and Cilic will face either the third 32-year-old Spaniard, David Ferrer—who beat Michael Russell in three sets—or Ivan Dodig. And the score of the Croatian’s match against Brayden Schnur? Well, it needed a deciding tie-break in the longest match of the day, all 2hrs 32mins of it: 6-4, 3-6, 7-6.

It was approach midnight before Berdych finally filled that slot among the last 16, slipping into the draw between Lopez and Ferrer. And it would not have been right had it not gone to three sets: 6-7, 6-4, 6-4.