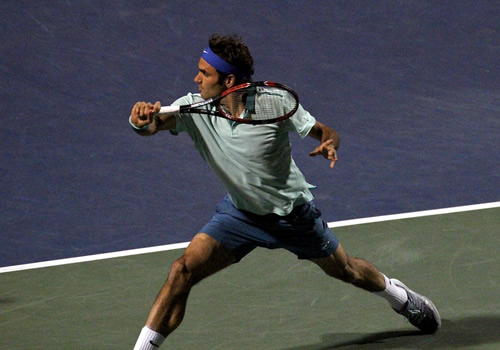 Age has been quite a hot topic at the Rogers Cup this year. Driven, of course, by the fact that Roger himself—Federer, that is—celebrated his birthday during this tournament.

But also that he continues to flout the unwritten rules of tennis that, by the ripe of old age of 33, a player’s powers, and their desire to play, to win and to put in the work that goes with such ambition, begin to diminish.

Federer, of course, has been hearing such talk, and dismissing it, since before he even turned 30. Now, it has become something of a joke.

Within minutes of the dawn of his birthday, I started… “So, the birthday question. Of all your records and achievements…”

And he jumped in: “…becoming 33 has been my biggest one?”

That was not, as it happens, my question—but he was ready in case it was.

A man who last year went about developing a newer, bigger racket, who took on a mentor of the prestige of Stefan Edberg, and immediately began scoring big wins was certainly not planning his retirement party any time soon.

A final finish at his first event of 2014, a semi run in Australia, beating Jo-Wilfried Tsonga and Andy Murray, the title in Dubai via victory over Novak Djokovic, and final finishes at the Masters in Indian Wells and Monte Carlo, set the pattern. Then on grass, the Swiss won Halle and very nearly won Wimbledon, too, in one of the tournament’s best finals since, well perhaps Federer’s previous five-setters there against Roddick in 2009 and Nadal in 2008.

And when it comes to age, it’s been interesting, too, that the ‘young guns’, the rising stars such as Milos Raonic and Grigor Dimitrov who have gradually risen through the ranks into the top 10, are not what used to be considered ‘young’ on a tennis court. The big names of the recent past—Boris Becker, John McEnroe, Bjorn Borg and, latterly Rafael Nadal and Federer himself, had all won their first Grand Slam at a younger age than Raonic and Dimitrov’s 23.

No, a look at the current top 10 shows that Federer cannot be regarded as old. His quarter-final opponent David Ferrer, who hit a career-high No3 last year, is 32. Stan Wawrinka, 29, won his first Major this year, Tomas Berdych also presses into the top five at the age of 29.

And then take a look at three of the four semi-finalists this week. The first to reach the final, over Dimitrov, was the 29-year-old Tsonga. As for Federer’s opponent, Feliciano Lopez, he turns 33 next month. Yes, these two men go back a long way.

And while Lopez had drifted in the rankings from his No15 high of two years ago—when he was 30—he was heading back upwards on the back of a great grass run to the Queen’s final, the Eastbourne title and the fourth round of Wimbledon. Now he was guaranteed a return to the top 20 and, should he reach his first Masters final, could hit another career high.

As it was, this would be the first Rogers Cup semi-final featuring two players aged over 30 in a decade. And while Lopez, like Ferrer before him, had failed to beat Federer in any of their previous 10 matches—dating back to Federer’s first Wimbledon triumph in 2003—he had taken him very close on more than one occasion. The most memorable, in Madrid in 2011, took three hours and three tie-breaks to decide, with the final game of the first set needing 15 points to win.

It would prove to be a match of pace, aggressive tactics and not a little net work. Federer came in twice in the opening service game to hold with ease and Lopez’s problems started almost at once. Serving in the fourth game, he went 0-40 down, saved all three break points, and went on to save three more as well as six deuces, before Federer got the break.

The Swiss came out the better of a stunning opening rally in the next game, of strike and counter strike, of great flat, low and angled hitting. He held for 4-1 and came close to breaking again when he attacked the net to earn the first of four more deuces and a break point. It was credit to Lopez that his serving stayed so strong, and withstood attack after attack at 2-5 as well—three more break points resisted with some fine sliced backhands.

But Federer closed out the set with, what else, a serve and volley, 6-3.

The opening game of the second set was a disaster for Lopez: a double fault for break point and then a wild smash long. The writing seemed to be on the wall when Lopez took an extended medical time out for treatment to his left neck and shoulder, the side from which he delivers his powerful serve and one-handed backhand.

But it was not the walk-over it might have been, with Lopez producing some beautiful down-the-line winners and backhands sliced cross-court, though his eight aces were outnumbered by Federer’s 13.

By the end, though, there was almost every shot in the book, plus incidents by the bucket-load—including what has become one of Federer’s trademarks, a perfect tweener, though he did not win the point.

First there was a helicopter, and then the red and green lights of a drone that suggested some kind of alien lifeform checking out this planet’s wondrous sport of tennis.

Federer was not distracted by any of it, held to love for 5-3, and sealed the deal with an ace, 6-4.

Even then the fireworks were not over: A full light display exploded from the stand above the court. Whether they were just late for Federer’s birthday or early for the crowning of the champion tomorrow, we may never know.

So Federer, the only top-10 man left in this quick, athletic tournament, will seek his 80th title and third Rogers Cup tomorrow afternoon. But he is very wary of the danger of his good friend Tsonga who, when on form, can leave an opponent rooted to the spot with his charismatic tennis—even Federer, who suffered a dramatic five-set loss at Wimbledon in 2011 when Tsonga turned on a breathtaking display. More importantly, Tsonga beat Federer in both their previous Canadian meetings, both in three sets. Federer recalled it well:

“He beat me here in Canada, maybe once or twice. I think he just can overpower guys, serve up a storm and then play really aggressive with his forehand and also be solid in his backhand. You think you’re in a safe place sometimes in the rally, and he takes one step and just hits it and the point is over.

“He’s one of the few guys besides Stan and some other guys who are not the “big four” who can do that. That’s why he’s been in the top 10 for so long. For him, it’s just really being physically fit, you know. The rest then sort of takes care of itself normally. He also is quite a big confidence player, because sometimes he does play with small margins because he does take huge cuts at the ball and sometimes this is not sustainable.

“But that’s how he’s played me. When he beat me at Wimbledon, it was unbelievable how long and how good he played for a long period of time. Yeah, and then some other times, he was just better than me, really. Pretty simple.”

They may not be the “young guns” or Canadian, a reigning Grand Slam champion or the world No1, but these too mature and ever-popular men, Federer and Tsonga, will almost certainly put on the show of the week.