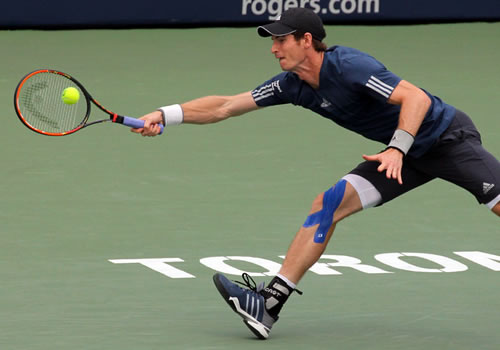 The Rogers Cup in Toronto began with three former champions. But by the quarter-finals, the three-time titlist and top seed Novak Djokovic had gone.

Two-time titlist and second seed Roger Federer survived a late-night battle with No15 seed Marin Cilic. He was joined in the quarters by fellow two-time titlist and No8 seed Andy Murray, though the Briton did not have to lift a racket because two-time Rogers Cup finalist Richard Gasquet withdrew with injury.

Such has been the pattern this week. No3 seed and Australian Open champion Stan Wawrinka made his own early exit to the unseeded Kevin Anderson and the No4 seed—and one of the serious contenders for a deep run on these fast courts—Tomas Berdych did the same to the unseeded Feliciano Lopez.

So while, on paper, Murray was favourite to take advantage of the loss of one of his biggest rivals, Djokovic, in the top half of the draw, he too would soon book his flight to the next Masters in Cincinnati.

He played the popular Frenchman who had taken Djokovic by storm, No13 seed Jo-Wilfried Tsonga. A former top-five player and Grand Slam finalist, he is renowned for his athleticism, touch and creativity around the whole court—but also for some inconsistency. For while he had twice before reached the semis of the Rogers Cup, he was not enjoying the best of form this year, reaching only one final in Marseille this year.

As a result, Tsonga had dropped to world No15 ahead of Toronto. What’s more, Murray had beaten the Frenchman nine times in their 10 meetings, and that only loss dated back to Tsonga’s finest Grand Slam run in Australia in 2008. Only this year, in March in Miami, Murray had dominated proceedings in a 6-4, 6-1 win.

But the problem with Jo is that, when he’s hot, he can be unplayable. Ask Federer who was on the receiving end of a scintillating performance at Wimbledon 2011, and in Roland Garros last year. Or Rafael Nadal, who saw Tsonga’s best at Queen’s in 2011.

And today would be one of those days—though there were till inconsistencies, and chances for Murray to wrench the win from Tsonga’s hands. Of concern, too, was the taping around Murray’s right knee, and there was more than one wince from him when he was stretched wide of the baseline.

Not that Murray had many openings in the first set to chase down. Tsonga served with great pace and accuracy, opening proceedings with a 224kph ace and sealing the first game with another. He would end the match with a tally of 18. He staved off a break point in the seventh game with another and, come the tie-break, took that too, 7-5, with an ace.

Tsonga started the second set in similar style, this time serving second, but Murray now found another gear, and went on the offensive to convert a break point in the fourth game with a superb forehand pass down the line.

He could not hold onto his advantage, Tsonga broke straight back and served to level at 3-3. Murray’s level dropped briefly again, and Tsonga was there to pounce in the ninth game, but two break points went begging as Murray opted to go on the offensive, held, and turned his attack on the Tsonga serve. It worked, and the pressure forced a double fault and then a forehand error for the break and the set, 6-4.

With a shirt-change apiece, it was back to business for the decider, and it quickly looked a though Murray’s momentum would carry him to a swift victory, as a stunning backhand down the line brought up break point, and minutes later he stood at 3-0 to the good with a love hold.

He was perhaps not expecting Tsonga to find more, but the Frenchman did. In fact he came alight, turning on his charismatic tennis—huge forehands, net rushes, smashes and more—to level the match and then break for a 4-3 lead. An ace completed a quick hold and he served out—despite facing one more break point—in some style, with a 235kph serve, 6-4, after two-and-a-quarter hours.

As the crowd now demands, Tsonga celebrated in his unique way, bouncing and beaming around the court. He was as delighted as the crowd with his 42 winners—Murray managed just 20—and his bold, attacking tactics.

Jo is a top player. He’s a fantastic athlete

Tsonga made 17 points out of 24 at the net, and on these quick courts, that is increasingly a tactic that is earning rewards. Federer is leading the way in fine-tuning that old-fashioned net game—helped, of course, by mentor Stefan Edberg—but it is surely no accident that the other men in the quarters feature big serving and not a little attacking play: Milos Raonic against Lopez, Anderson against Grigor Dimitrov.

Even the smaller mature figure of No5 seed David Ferrer, who would attempt to overturn a 0-14 deficit against Federer in the night session, has cultivated some very solid tennis at the front of the court.

It seems certain, then, that the semis in Toronto will feature some fast-paced attacking tennis. And praise be for that.

For Murray, the road is to Cincinnati, but not before praising his opponent.

“I thought it was a high-level match with a few games by both of us in the second and third sets that were a bit scrappy. Jo is a top player. He’s a fantastic athlete. When his game is on, he’s very tough to beat.

“But I felt like I was hitting the ball well. I served well, especially in the beginning part of the match, and I moved good. So just maybe some bad decisions at the wrong time cost me today.”

And for his fans, Murray had words of reassurance about that taping—should his long match not be reassuring enough:

“A lot of [my movement problems] have to do with the way that Jo plays and the way he was serving in the first set. I think, you know, when you come back onto the hard courts after a break and not playing any matches for five weeks, you feel things are a little bit sore—but nothing to be concerned about.”