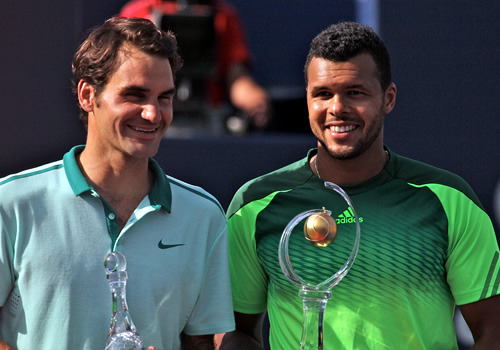 Novak Djokovic dubbed his half of the draw for the Rogers Cup as ‘terrible’, and he was not wrong.

He was joined by two-time former champion Andy Murray and the current Australian Open champion Stan Wawrinka, along with the in-form young player newly in the top 10, Grigor Dimitrov: There were few easy paths through to the final.

Here also was a man who had beaten Grand Slam champions in their most successful tournaments: Roger Federer at Wimbledon and Djokovic at the Australian Open.

There was plenty of reason for his good friend Federer to be wary of the threat he posed in the final, and not least because in both their previous meetings at the Rogers Cup, in 2009 and 2011, Tsonga had won in three sets, as Federer recalled ahead of title match.

“He beat me here in Canada, maybe once or twice. I think he just can overpower guys, serve up a storm and then play really aggressive with his forehand and also be solid in his backhand. You think you’re in a safe place sometimes in the rally, and he takes one step and just hits it and the point is over.

“He’s one of the few guys… who can do that. That’s why he’s been in the top 10 for so long. For him, it’s just really being physically fit, you know. He also is quite a big confidence player, because sometimes he does play with small margins because he does take huge cuts at the ball and sometimes this is not sustainable.

“But that’s how he’s played me. When he beat me at Wimbledon, it was unbelievable how long and how good he played for a long period of time. Yeah, and then some other times, he was just better than me, really. Pretty simple.”

Federer had seen, as had everyone else in Toronto this week, that Tsonga was enjoying some of that very form on fast courts that suit his all-court, power-and-touch game. It was he who took down Djokovic, and then Murray and then Dimitrov—a top-drawer run if ever there was one. It has been a rare accomplishment to take out four top-10 players in a Masters but Tsonga could be the first in 12 years.

And this hugely popular player relished the chance: “It’s always an honour for me to play against him in such a good area. Yeah, it can be one of the biggest victories for me if I am able to beat him.”

He also recognised that, if there was one player who would command the crowd more completely than he, it was Federer. He had experienced it not just in competition but in numerous exhibition and charity matches, where their mutual respect and friendship—and artistry on a tennis court—have captivated crowds around the world.

“Always when you play against Roger, it’s special. First, because you play in a big stadium and every time, you know, the crowd is for him. So it’s quite a good sensation, you know? [smiling] It’s quite a good feeling when you win against 10,000 people.”

Yes, Toronto would be behind the man who bears this tournament’s name: The fans have thronged every practice, every signing, every match… and even burst into a unified rendition of “Happy birthday” in the middle of his quarter-final match.

And after a year of struggles amid back injury in 2013, fans saw his chance of a first Masters title in two years, his 80th career title, his 300th Masters match-win—and it would take him past Nadal to the top of the 2014 match-wins leader board. Not bad for the 33-year-old father of four.

One of Federer’s big challenges, though—aside from the man on the other side of the net—was his power of recovery: He had pulled the night shift for three nights in a row, twice in three setters. It would be a fast turn-around to switch to an afternoon final, as he admitted:

“It’s a lot of fun but it’s also a lot of work… week it’s been a grind, going to bed at 3:30pm [Friday] night—it’s been rough. And then turn around to 3pm match… so I hope I can play decent tennis.”

But it was evident from the start that Federer’s timing was not quite on. As early as the third game, he chased in to miss an easy volley. While Tsonga found two aces in the seventh game, Federer double faulted, then netted a backhand for deuce. The same story unfolded through a set that never really hit the heights on either side. But too many errors from Federer set up a first break point for the Frenchman just as the first set seemed destined for a tie-break. Instead Tsonga took the set, 7-5.

If anything, Federer struggled still more in the second set. A love hold from Tsonga was followed by a drawn-out hold from Federer as he made error after error. He fended off a break point but managed to find two aces to hold for 3-3.

It was exactly the same in the next game: Federer constantly digging deep to pull back a deficit. From 15-40, following a double fault, he reached deuce with two serve and volley plays. He faced two more break points, one minute hitting an ace, the next netting a volley or firing a forehand wide. He fought on, holding for 4-4, and did it again for 5-5 in the longest game of the match.

This time, of course, the two break points were also match points—tense moments indeed, but Federer held, while Tsonga, sometimes guilty of errors under pressure, was both relentless and consistent, as he had been all week.

Federer aced to level and held again to take it to a tie-break—but repeated long service games were taking their toll. He stretched out the right shoulder that takes all the pressure in his one-handed game, and managed a couple of aces at the start of the tie-break.

Tsonga, meanwhile, was now hitting his serve at over 230kph, forcing more errors. The outcome never looked in doubt, and Tsonga served out the match, 7-6(3), without ever facing a break point, to be one of a very rare breed of player in the current era: A second Masters title, six years after his first.

It was a gracious ceremony, as one might expect from two men who like each so well. Tsonga began by thanking Federer for all he has done for tennis, Federer telling the Frenchman that he deserved to be the champion.

Tsonga, perhaps the owner of the most winning smile in sport, could not stop beaming: “I played well all week. I beat many good guys. It’s a big achievement because I worked really hard to come back from my knee injury last year.”

Federer admitted that he had struggled with the tight schedule and the difficult switch from cool night play to what turned out to be the hottest afternoon of the tournament.

“Today was just difficult in terms of rhythm from the baseline, so it was like a new tournament for me. No excuses. I think he played really solid and well when he had to.

“I’m overall pretty happy that I made the finals in my first tournament back on hard courts…I know what I need to work on the next few days and weeks.”

Tsonga earns another reward for a quite outstanding week of tennis. Four top-10 victories will take him back into the top 10 himself. And with this form, fitness, and the confidence that comes from both, he will be a threat in Cincinnati and New York and once more a contender for the ATP World Tour Finals.