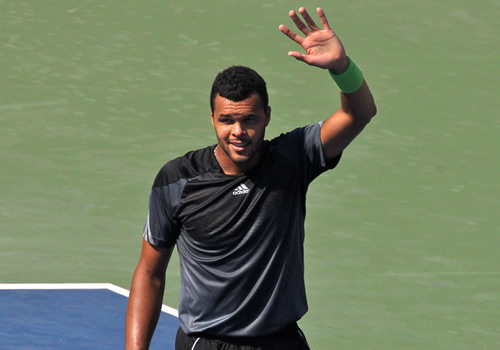 Jo-Wilfried Tsonga will play Roger Federer in the Toronto Masters final after the Frenchman cruised past Grigor Dimitrov 6-4 6-3.

The 29-year-old Tsonga, who beat Andy Murray in the quarter-finals, battled through to his 20th career final after hitting 22 winners to Dimitrov’s 13.

“I’m more consistent and it’s good because it [helped] me beat three guys in the top 10,” said Tsonga.

“I didn’t do that [for a] couple of years now and it gives me hope for the rest of the year.

“It’s good because I always believe it myself during all these years, and all this week where I lost against those guys and finally I get a little rewards for the moment of this.

“It’s good for me. It will for sure make me stronger, keep my motivation at the highest level and it’s great.”

Dimitrov, who made 26 unforced errors to Tsonga’s 19, was keen to take the positive from his run to the semi-finals in Canada.

“I have to take the positive side of the week,” said Dimitrov. “Coming to Cincinnati I feel quite good. I don’t put my head down for a second here, because it’s a good progress for me.

“But I’m still disappointed with the loss. I’m not going to hide that. I have to think positive. There is a lot of tournaments coming ahead. US Open is around the corner. I’ve got to make sure I’m fresh and ready.”