Toronto Masters: Roger Federer gears up for the Rogers Cup as he bids to win his first Masters title since 2012 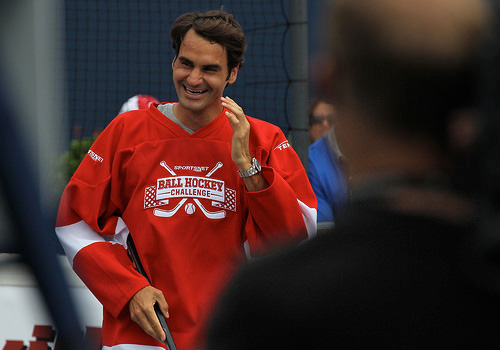 Roger Federer has never been one for histrionics, never one for bluster, rarely one to let anger or frustration get the better of him.

You can count on the fingers of one hand—or, more accurately, on the thumb of one hand—the number of times his racket has been demolished mid-match. You need no fingers at all to count the times he has ripped off his shirt in the ecstasy of victory. Such displays are simply not his style.

Indeed over the years, he has become almost as famed for his coolness in the heat of battle as for his apparently effortless athletic grace in this most physical of sports. Yet Federer’s emotional discipline was as hard-earned as his physical prowess.

He has talked often of the temper he had as a junior, and of his determination to master it, to channel his energy more productively. Once done, he never looked back—nor did he ever manage to hide entirely his emotional underbelly. Federer has surely wept more tears, whether in victory or defeat, than any other player.

However, the extrovert, expressive side of the Swiss is more often seen away from match-play. Put him in front of a microphone, and he is loquacious. Check the adverts for his assorted sponsors, and he relaxes into any number of roles. Put on a fund-raiser, and he is the life and soul of the party. Watch him work a room of media or a practice session bursting at the seams with fans, and he has the deft touch of a PR pro.

It has been thus since he first charmed tennis with his style of play and his winning ways, since he began ticking off records right, left and centre, since he took on the ambassadorial duties of tennis’s front-man.

Yet here now is a man who is, arguably, no longer the top dog. Federer has not won a Grand Slam since Wimbledon 2012 nor a Masters title in almost two years. Last year, he endured had a tough season marred by injury and early losses, dropped out of the top four, and was plagued by questions on when rather than if he might walk away from his beloved sport.

Not a bit of it. With his back healed, a new racket in his hand, a new mentor in Stefan Edberg by his side, and a return to form—40 match-wins already this season—even the birth of a second pair of twins has not dampened his desire to play. Nor does he seem to resent the accompanying brouhaha. If anything, when he talked in Toronto ahead of his campaign to win the prestigious Rogers Cup for a third time, he seemed entirely as ease with the world and its demands.

So I asked whether, considering his burgeoning family, he ever regretted having made himself so constantly ‘accessible’.

“No, not at all. I’m happy I did everything I did—with doing press conferences in three languages and the same thing for radio and TV, newspapers and magazines, you name it. I think it was only the right thing to do.

“Do I sometimes think it’s a bit excessive? Yes, no doubt. I don’t understand the reason to do maybe a press conference after a 6-2, 6-2 win, but that’s the rules of the game. And I will be part of that. It’s fine, you know?

“And today, I’m maybe in a place where less is more, because people already know a lot about me. But I think the stage is set for other players to make a name for themselves, do more media, do more promo, but of course if I can be helpful in ticket sales and make sure that Toronto, for example, gets a bigger place on the map, then I’m very happy to do that, clearly.”

But do the pressures to perform, to continue to be his sport’s role model, become heavier with the years?

“Not really, I feel more laid back today than I ever have because I don’t have to defend like 12 tournaments a year. I only won one last year, so I feel I don’t really have to prove anything to anybody—although people are always going to disagree with that.

“For me, it’s about how do I feel at practice, how’s my motivation, how am I actually playing—how do I feel rather than everyone else thinking they know. I can analyse it much clearer today than I ever have, and from that standpoint, I’m not in a hectic place.

“When I was younger, I felt much more pressure. I felt like I had to be what people said. I would listen to everything, Today I kind of go at my pace. I really enjoy the process, and see the positive side of things.”

The question of Federer’s age was left unspoken—though that is sure to change later this week when he turns 33—but he did talk about the changes he has seen in the game since he first hit the headlines, and of his hopes for a modest return to some of the ‘old’ ways.

“The game has slowed down a little when it comes to court speed because I think some tournament directors were tired of big-serving matches with no rallies whatsoever, and it got very physical and athletic from the back of the court. In the process we lost a lot of volley players.

“I think coaches overall everywhere make sure their players are very good on forehand and backhand and good servers, but are neglecting a little the volley play, though I do think there is a place for it… Everyone with success was a baseline player, so clearly then you inspire the next generation by doing that.

“Now we are again at a crossroads a little bit where things are speeding up. Toronto’s much faster than it used to be four years ago, in my opinion, and it’s nice to see there is some change, where an attacking style is going to pay off more.”

Judging by his tennis this year, and his choice of the most elegant serve-and-volley exponent of his age, Edberg, as his coach, Federer will be quick to take advantage of any faster surface. He was prolific in his net plays throughout the grass season, and his innate attacking style of tennis suits a net-bound game.

Not until Tuesday evening will Toronto, as well as Federer’s fans beyond the bounds of Canada, be able to measure the speed of the Swiss attack, but one thing is certain: Win or lose, he will do it his way.