Novak Djokovic, Stan Wawrinka and Richard Gasquet are among the big names to crash out of the Toronto Masters 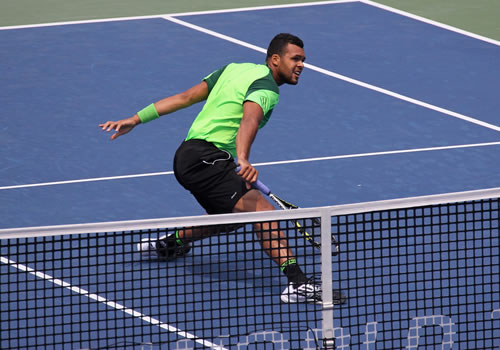 The day was a blockbuster that featured eight of the top 10 men in the world. The only two not on the schedule were those who had not come to Toronto in the first place because of injury: Rafael Nadal and Juan Martin del Potro.

But by early afternoon, the Rogers Cup draw had been decimated.

No3 seed Stan Wawrinka has never enjoyed great success in Canada. In seven visits, his best result was a quarter-final finish in 2011. In truth, he had made heavy weather of his first match this year, too, forced to come back from a set down to beat Benoit Paire in a final-set tie-break.

In Kevin Anderson, who reached a career-high of 17 only last month, he had not drawn an easy route to the quarters, either. The big South African performs at his best on hard courts and had certainly come into form this season, despite elbow surgery in January. He had reached two hard-court finals and, in his best result of the year—and very significantly—had beaten Wawrinka for the first time in Indian Wells in three sets.

It was a clean, clinical display of 29 winners and 11 aces against a Wawrinka who hit fewer than half his first serves into play and produced just one ace—and this from a man whose serve is usually such a potent weapon.

The Swiss had been practising intensely, striking the ball well, and it looked as though that he would draw on that training to carry him through the tie-break, where twice he had set point. But he made too many errors, and it was to Anderson that Wawrinka gave credit afterwards:
“I started really well, I think [but] I did a really bad game to give him a back the break. I was starting well, I was moving well, and that was a bad moment for me. That gave him confidence to play better after.

“In general he served really well. Was tough to return. Little bit windy, and I had some chances, especially in the first set. I had set point. I had two, three times 0 30, and the chances I didn’t take were more about choosing the right shot to play. Made some mistakes that I shouldn’t do, and that happens. Then it’s tough to lose like that.”

Wawrinka’s loss was an upset, certainly, but nothing compared with what followed.

Novak Djokovic, who claimed the No1 ranking with the Wimbledon title just last month, was aiming to win his 20th Masters tournament at the event he has won three times before, and arrived with just two losses since he completed the Indian Wells—Miami sweep in the spring. What’s more, in seven previous appearances at the Rogers Cup, he had never fallen short of the quarters.

After a month away from competition, taking time to recuperate and to marry, he signed up to singles and doubles in Toronto, but he and partner Wawrinka went out of the latter in the second round, and he yesterday also faced a huge battle, in perhaps the toughest quarter of the draw, against Gael Monfils. He survived in a third-set tie-breaker, but seemed to be lacking his usual spark when he came to press.

It soon became apparent, as he took to court against another flamboyant French player in Jo-Wilfried Tsonga, that he seemed still to be lacking some of his usual vitality. Tsonga is a former top-five player and Grand Slam finalist, but has not been at his best, reaching only one final in Marseille this year. As a result, he was seeded just No13: hence facing Djokovic so early. What’s more, Djokovic had beaten the Frenchman 11 consecutive times since losing to Tsonga at the Australian Open in 2010.

But the popular Frenchman broke in the third game, sealed a 4-2 lead with a glorious touch volley winner, and broke again in the seventh game as Djokovic opened it with a double fault and closed it with one of a growing number of errors. In 23 minutes, Tsonga was 6-2 to the good.

Djokovic struggled from the start of the second set, facing three deuces courtesy of three backhand errors. It was very uncharacteristic from the super-consistent Serb, and gave Tsonga the confidence to race more often to the net. The Frenchman broke with a winning smash.

Djokovic reached deuce in the next game but largely as a result of Tsonga errors, but he could not break through. Serving again, he hit a forehand wide to give up another break, and the packed crowd, vociferous in their support for Tsonga’s attacking tennis, began to cheer for Djokovic, desperate to lift him.

But it looked a lost cause. He barely waited at the 3-0 change of ends, eager, it seemed, get his nightmare over. Tsonga held to love, faced his only break point of the match, but found a 225kph serve to seize the victory, 6-2. The match had lasted just 63 minutes.

This marked Tsonga’s third victory over a world No1 and his second in Canada—he beat Roger Federer here in 2009—and that the famous smile to his face:
“It’s good for me because I’m looking for it since couple of months now, and now I get it. It makes me feel good on the way I practice and how I manage my game. So, yeah, it’s something positive for me.”

“You know, I’m working hard every day. It’s not every day you get the rewards of what you’re doing every day during the year, you know. You leave your family, practice every day hard, suffer a lot on the court. And when you win a match like this, you know, you just feel good. I will always show my emotion because I’m like this.”

What he did not know was that he could certainly be playing Andy Murray in the quarter-finals for, while he was dismissing Djokovic, Richard Gasquet was pulling out of the next scheduled match on Centre Court against the No8 seed—and out of his doubles match with Tsonga. A former finalist here, Gasquet had an abdominal strain, giving Murray a walkover.

In place of what promised to be intriguing match-up came No5 seed David Ferrer against the unseeded Ivan Dodig—and very quickly, this too unfolded in an unexpected direction. The No62-ranked Croat raced through the first set, 6-1, and Ferrer faced break point after break point in the second set before breaking himself to level the match, 6-3. The feisty Spaniard fought to victory in a 6-3 final set.

But what of Djokovic? He admitted to no problem in a low-key press conference: “Congratulations to Jo. He played some great tennis. Served very well. He was obviously the better player on the court.

“I hadn’t played even close to what I intended before going to the court. Just nothing was going. No baseline, no serve, no return. Generally a very bad day, very poor performance. Couldn’t do much.”

What he said next may prove important as he moves on to Cincinnati and attempts to become the first man to complete the set of Masters titles:

“Confidence is the hardest thing to get but easiest thing to lose. Matches like this can really play with your mind. But in the end of the day, it’s not the first match and last match that I lost in my career. I know what is the next step, and I know what I need to do. I know that already tomorrow is a new day, and I forget about what happened and move on.”

He leaves behind a quarter of the draw that he described as “terrible” but that has now opened up nicely for his rival Murray. Though Grigor Dimitrov, a winner in three sets over Tommy Robredo, may have something to say about that—and Tsonga.

Roger Federer at 33: It’s not about the records, it’s the emotions