Tottenham Hotspur will not be entertaining the idea of selling Harry Kane this summer, according to Italian journalist Fabrizio Romano.

The England striker is widely considered to be one of the top attacking talents in the Premier League and his 17 goals in the top flight last term helped to fire Spurs to a top-four finish.

There have been some suggestions that Bayern Munich may be interested in signing Kane this summer, but Italian reporter Romano has rubbished those claims, saying that the striker is “untouchable” at the north London club and that he won’t be leaving Spurs this summer.

Romano also said that Tottenham chiefs would like to open talks with Kane about extending his contract with the club.

Posting on his personal Twitter account, Romano said: “There’s no discussion, negotiation or talk about Harry Kane. Tottenham always considered him untouchable and there’s nothing concrete going on with Bayern.

“Lewy, Paratici and Conte have never considered to sell Kane this summer – Spurs want to discuss a new deal soon.” 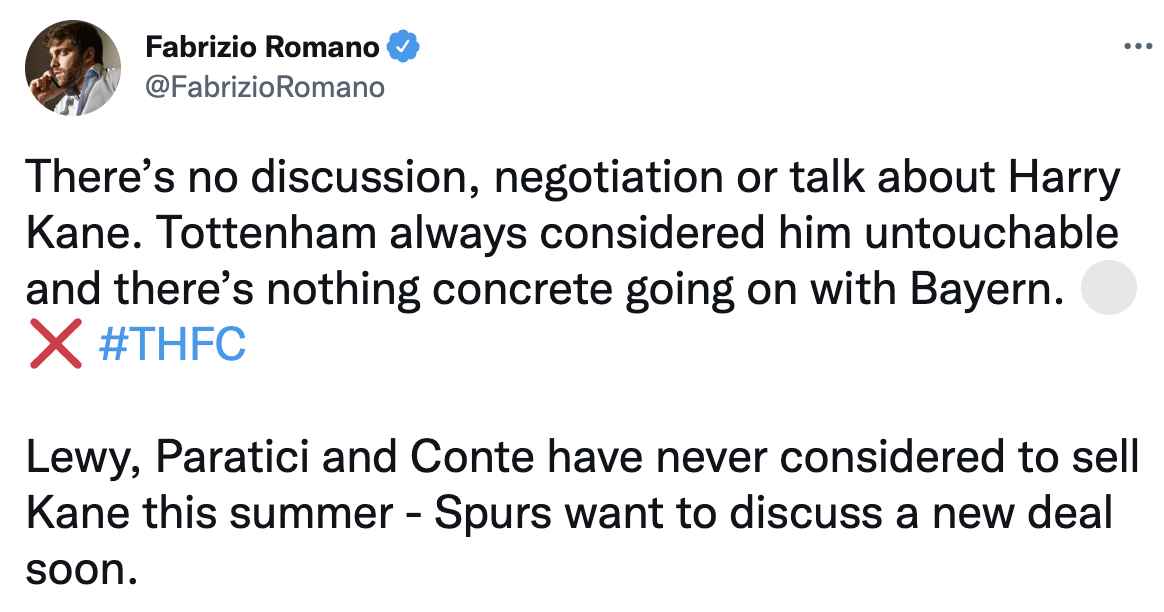 Kane netted 17 goals and made nine assists in 37 Premier League games last term as he helped to fire Antonio Conte’s men to a top-four finish to help them secure their spot in the Champions League for next season.

He also scored four goals in seven games for England last summer at Euro 2020 to help the Three Lions to reach the final under Gareth Southgate.

Tottenham will kick off their Premier League campaign with a home clash against Southampton on the opening weekend of the new season.