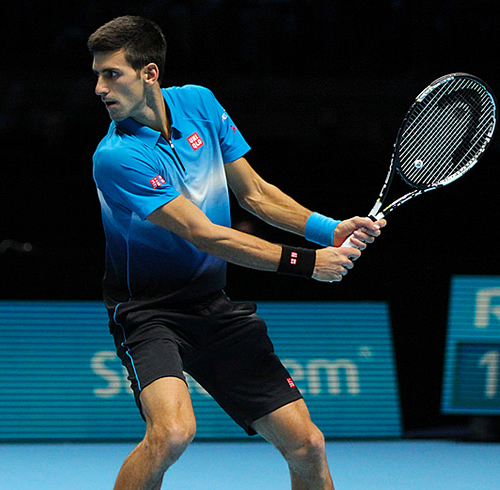 It’s been a near flawless year for Novak Djokovic: Year-end No1, having topped the rankings for a year and a half; three-time 2015 Grand Slam champion; six-time Masters, and 10 consecutive finals since winning the Australian Open.

It was indeed, then, near flawless—but not quite. And it fell to one of his most famed rivals to halt the Serb in all these tracks. Roger Federer, who was already the only man to beat Djokovic twice this year, rose to the O2’s challenge in his 14th end-of-year campaign and scored a third win.

So Djokovic found himself in the most unexpected place. Not just at the end of so many runs, but having to fight for his place in the semi-finals of the tournament. Already he knew he could do no better than second place in the pool. But to avoid the possibility of losing his place in the semis to Kei Nishikori, he had to beat Tomas Berdych in his final round-robin match.

He was, it should be added, the hot favourite to beat the Czech. After all, he had a 20-2 record over Berdych, including 17-0 on hard courts, and his only loss in more than five years came on the clay of Rome in 2013.

Add into the face-off not just the difference in form this year but that Djokovic had won all four of their previous matches here over the last five years, and Berdych had a mountain to climb.

But Berdych, as much as Djokovic, had a real incentive to find his best for this match. If he beat Djokovic in straight sets, he could still be the man to qualify for the semis, despite two round-robin losses to his name. He would, it is true, require Federer to beat Nishikori, for such are the permutations in round-robin competition.

And Federer had a small incentive of his own to win: It would guarantee the top spot, and that would guarantee avoiding Rafael Nadal in the semis. For although the Swiss may have beaten Nadal only last month in Basel, that bucked a losing run dating back three and a half years.

With qualification also beckoning for Nishikori, and with two wins from five previous matches against Federer, the Japanese star had as much incentive as any of them. He could even top the pool with victory.

Nishikori was on the verge of doing just that, too. He overturned a 1-3 deficit in the first set to break twice, 4-3, only for Federer to break straight back, and then again for the set, 7-5. Federer also looked in control in the second set, making a break to love for 4-1, but his first serve deserted him, and the flamboyant shot-making of Nishikori sizzled through five straight games for the set, 6-4.

The third set was just as tense, with Nishikori going 40-0 on Federer’s serve in the third game, but the Swiss made five straight points to hold, and broke in the next for 3-1. Still the Japanese was not done: again he broke to level, but at 4-4, Federer produced a love hold and broke for set and match, 6-4, after 2hrs and 10min.

This was, without doubt, the best and most hotly contested match thus far, with the two separated by three points out of almost 200 played. That Federer refused to bow when he had little at stake is testament to an enduring winning mentality, despite 14 visits, six titles and now 51 match-wins in this toughest of tournaments.

What his win did mean was that the Berdych task was just a little harder: He had to win in straight sets. He needed, then, to draw on, and exceed, his most recent performance against Djokovic in Paris-Bercy, where he took the Serb to two tie-break sets.

An immediate break didn’t help his cause, but a break back did—and producing three aces to save two break points in the fourth game really pumped up the crowd. However, Djokovic got another break to take a 5-3 lead as a bold Berdych chased in for a drive volley, but found the net. The Serb served out the decisive set, 6-3: There was no way back for Berdych.

Credit, then, that when he faced an early break in the second set, Berdych broke back and pressed Djokovic all the way to 5-5. But the world No1 forced a backhand error to break, and served it out, 7-5.

He sets up the latest in the most played rivalry in the Open era against Nadal, their 46th encounter. Djokovic trails by one, but has won their last three matches.

Federer would not know his opponent until end of play on Friday: In short, the winner in a Murray-Wawrinka showdown. The O2 arena will be rocking.