US Grand Prix 2012: Ferrari's Fernando Alonso says the new Circuit of the Americas looks "spectacular" ahead of Sunday's race 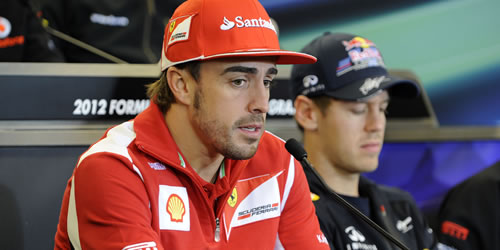 Fernando Alonso admits he is looking forward to driving the “spectacular” new Circuit of the Americas at this weekend’s US Grand Prix.

Formula 1 returns to the United States for the first time since 2007 on Sunday at the brand new Hermann Tilke-designed circuit in Austin, Texas.

And Ferrari driver Alonso, who is second in the drivers’ standings and 10 points behind leader Sebastian Vettel going into the race, has been impressed by what he has seen so far.

“The track seems spectacular, very, very nice, it will be challenging for us drivers and for the engineers as well,” said Alonso on Thursday.

“We did some simulator programs after Singapore then we started getting a little bit more intense this week.

“We also did two laps on the bicycle and hope to do some more this afternoon.

“I think it will be a good show for everybody and hopefully some good overtaking opportunities around the track so it can be a really good weekend.”

Alonso’s title rival Vettel, who is gunning for his third straight world crown, refused to read to much into simulation runs ahead of Friday practice.

“We have to wait until we get out [on track] until we have a judgement on how the circuit feels,” he said.

“It looks quite interesting but it’s the feeling inside the car which I think is most important so I’m looking forward to tomorrow.”

England v Australia: We won’t get bogged down by France loss – Deans