US Grand Prix 2013: Sebastian Vettel reflects on a "fantastic" victory after taking his eighth straight race win in dominant fashion 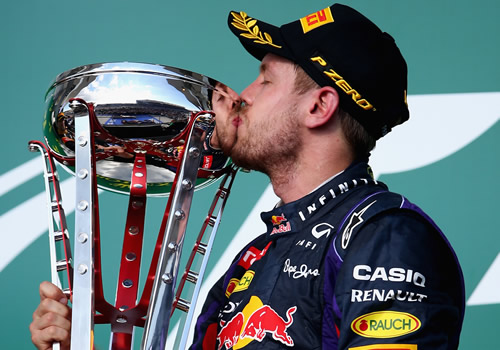 Red Bull’s Sebastian Vettel does a lot of talking for man who in recent weeks has supposedly continually left himself speechless.

Those who thought the Red Bull driver would start thinking of the holidays after securing his fourth world title clearly don’t know him very well – and he won his eighth straight race in dominant fashion to claim the US Grand Prix in Austin, Texas.

Another win in Brazil, when the final race of the season is staged at the fabled Interlagos circuit, and he’ll equal Michael Schumacher’s record of 13 wins in a single season and Alberto Ascari’s 60-year best of nine straight race wins.

However, this chequered flag did secure another record – the most consecutive wins in a single season, a mark previously jointly held by Schumacher and Ascari.

“Speechless, we have to remember these days,” he told his team, after taking the chequered flag and performing more of those trademark celebratory and increasingly expensive doughnut spins.

“There’s no guarantee they will last. I love this team. Incredible, I love you guys.”

Lotus driver Romain Grosjean held off the challenge of Red Bull’s Mark Webber to take second place on the podium – a deserved reward for a flying start and his fourth podium finish in five races.

Lewis Hamilton finished top British driver in the Mercedes while Fernando Alosno took sixth, securing a rather hollow second in the overall drivers’ standings, an achievement assisted by the absence of nearest rival Kimi Raikkonen.

“I don’t know how I do it if I’m honest. It’s impossible to know what to say,” added Vettel, who looked a little too gleeful to be flanked by Dallas Cowboys cheerleaders on his way to the podium to collect a 38th career Grand Prix winners trophy.

“The car was fantastic. It was a bit tight at the start, Romain had a good start and I didn’t know if it would be enough. We had good pace though and could control the gaps for eight wins in a row.

“My debut was in 2007 in Indianapolis so to come back last year, podium and win today, it’s fantastic.”

Much will be made of Vettel’s dominance but spare a thought for Grosjean, a driver once written off as a maniac who recorded the best result of his F1 career.

“The car worked well and everyone did a 100 percent job and I’m glad to be on the podium here in the United States,” he said.

“It was a good race, a good start and I got past Mark and almost caught Seb.

“I like this country and I always look forward to this beautiful track. Maybe next year I will go one better.”

Hamilton produced a strong and measured drive to bank 14 valuable points for Mercedes, meaning they outscored Ferrari to maintain a 11 point advantage in the battle for second place in the constructors’ standings.

Nico Hulkenberg took sixth ahead of McLaren’s Sergio Perez while Valtteri Bottas banked the first points of his career in eighth – a much-needed boost for his Williams team.