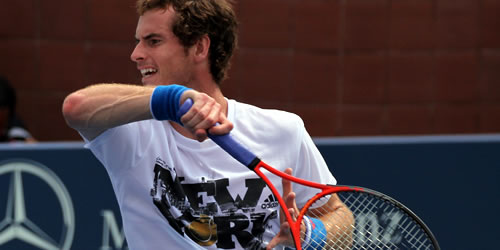 They were the last two men standing. After tornadoes, heat in the 30s and humidity close to saturation, monsoon-style showers and gale-force winds, the No2 seed Novak Djokovic and No3 seed Andy Murray would engage swords on another third Monday for the final final of US Open.

In many ways, there was little between them: Murray has a scant 2cm more height and a mere seven more days on the clock, but the long-standing colleagues—friends, even—both boast a close-knit family, beautiful long-term partner, dry wit and a penchant for small dogs. Yet they have remained separated in their brilliant careers by one vital marker: a Grand Slam title.

The year that Murray reached his first Major final—here in New York in 2008—Djokovic won his first in Australia.

The year Murray reached his third Major final—in Melbourne in 2011—Djokovic won his second, beating Murray in that same Australian final. The Serb went on to claim Wimbledon and the US Open, too—and then his fifth Slam in Australia this year, a run that now extends to 27 straight hard-court, Grand Slam matches.

Djokovic was now No1 in the world, while Murray still could not take that final Major step—but this summer he twice outlasted Djokovic, reaching another Major final at Wimbledon and winning gold at the Olympics—and in the latter, he beat Djokovic along the way.

Now, with their paths converging for a 15th time, could Murray finally prove himself the equal of the defending champion where it mattered the most, on the biggest and brightest Grand Slam stage of New York?

Their clashes, evenly split over their last half dozen meetings, have invariably been close. Their semi-final meeting at the Rome Masters last year was the match of the tournament and, more recently and more pertinently, their near-five-hour semi battle at the Australian this year was their most memorable yet.

Then there has been the x-factor, the element that has added more confidence, a calmer demeanour, a smarter game plan to Murray since he joined the Scot’s camp: Ivan Lendl. The steely Czech famously also played and lost four Major finals before winning eight of them, and seemed to have helped build the concentration and self-belief that characterised the Murray of 2012. It was a combination that delivered gold in London: would it spin the same magic again?

As luck would have it, within an hour or two of the match starting, the wind sprang up, blustering around Arthur Ashe with intent. Conditions were not as severe as on semi-final day, but then, Murray’s more creative hands had adapted better than Djokovic’s crisp precision. The Serb managed just one first serve in the opening game, and he was broken to love. But with a switch of ends, the same happened to Murray.

Djokovic again had to fight back from 0-40 down, but he held, and now it was Murray’s turn at the ‘better’ end. He threw in some testers—a drop, a lob and some low slices—to hold to love and the same box of tricks forced errors from Djokovic to break again—and the Serb’s racket was also broken as they changed ends.

Still both teased and tested, not going for outright winners but trying to force the errors. It brought the longest rally of the whole tournament, 54 shots, but three big serves consolidated Murray’s lead.

As both men began to adjust, the decisions grew more difficult: force the pace and go for winners, or play percentage and wait for opportunities. Djokovic did the former, going on the attack, Murray defending for all he was worth, but forced into errors. The Serb broke to level at 4-4 and served out his easiest game to take the lead for the first time.

So Murray, contrary to early signs, was the first to serve to stay in the set. It was a tense hold—both men with three times the errors to winners and all square at 30 points apiece. And it was tense progress to a tie-breaker after an hour of play.

Murray trailed all the way through, until the crucial point: He wrong-footed Djokovic twice to earn the first set point. The Serb nervelessly made a smash winner but hit a forehand long to give Murray another chance on serve, but he hit an easy backhand into the net. On a third, he hoisted a lob wide. He had a fourth bite, and a fifth and a sixth, and finally Murray found an ace to seal an exhausting set.

Momentum can be a huge force in tennis, especially after such an emotionally draining hour and a half, and Djokovic could not bounce back before Murray had broken twice and taken a 4-0 lead. Despite numerous long and testing rallies, the Scot made just one error to Djokovic’s 11, but the Serb is at his most dangerous when behind. He refocused and broke back, and then with Murray serving for the set, he broke again. It looked like another tie-break as Djokovic served at 5-6, but Murray returned serve as only he can, taking control of rallies and earning two break points. Djokovic hit another ball wide and Murray took the set, 7-5.

This time it was Murray who suffered the emotional let down. Three great serves saved break points in the opener but not on the next serve. Djokovic, pumped by a couple of stunning winners, broke and began to look very dangerous. Who did not recall his comeback from two sets down to beat Roger Federer in the semis here last year? Another break and a hold, and the Serb had the set, 6-2.

Now it was all Djokovic: the intent, the desire and the run of play. He broke in the opening game, and although Murray pressed through long, arduous rallies, he could not break through the Serbian brick wall as they headed into a fourth hour. Indeed he could not hold off another break at the end of the set and Djokovic levelled the match, 6-3.

That gave the Serb the advantage of serving first as they headed towards the climax. And with his first serve percentage in the fourth set up to 83 compared with Murray’s 45, Djokovic was looking near impregnable. And yet…

Murray found one last reserve of energy—though he afterwards confessed that he lost at least two toe-nails during the match—and broke in the opening game. He held for a 2-0 lead, roared at the crowd for their support, and they responded. Would the atmosphere in this unique tennis arena carry him through? It certainly seemed to. He broke again, before one more reversal. Murray fired serve and forehands long and Djokovic broke back.

From a 3-0 advantage, Murray was back to 3-2, but four straight serve winners asserted his authority over the fast-tiring Djokovic, and he drove home the dagger with another break.

Before Murray could serve for his first Grand Slam title, however, Djokovic took a medical time out for treatment to his cramping legs. Murray kept his cool, trotted around the baseline, bounced the ball against the backboard. He had waited a few years for this, he could wait a few moments more. And a few moments was all it required. Five short points made Djokovic the beaten man, Murray the champion four years after his first final here.

The quiet man from Dunblane set many milestones at this, his favourite tournament. He became only the third man to win both junior and senior US titles, and the first to win back-to-back Olympic gold and New York silver. He will also overtake Rafael Nadal to become the new No3 in the world, and must surely have hopes of higher by the end of the year.

But the auspices had been in Murray’s favour from the dawning of 10 September. For it was on that day, in 1933, that Fred Perry won his first Grand Slam title at this very tournament. Perry went on to win his last title in 1936, the last Grand Slam won by a British man until 2012, the year of the London Olympics, the year Andy Murray won gold in singles and then silver in doubles, and the year he ended a nation’s 76-year wait for tennis’s biggest prize.