US Open 2012: Former world No1 Andy Roddick announces that he will retire from tennis after the final Grand Slam of the year 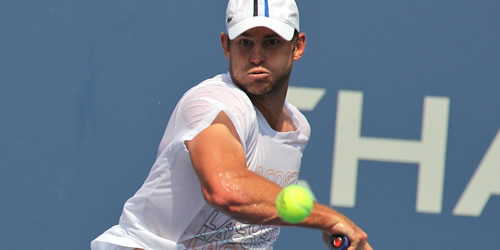 Andy Roddick announced he is to quit tennis after the US Open Photo: Marianne Bevis

In a shock announcement on the afternoon of his 30th birthday, Andy Roddick told the media at Flushing Meadows that he had decided to retire as soon as this year’s US Open is over.

It was done with the succinct style for which he has become famous:

“Thank you all for coming. I’ll make this short and sweet. I’ve decided that this is going to be my last tournament.”

He went on to explain his decision, which he admitted had not been finalised until he began this year’s campaign: “I just feel like it’s time. I don’t know that I’m healthy enough or committed enough to go another year.

“I’ve always wanted to, in a perfect world, finish at this event. I have a lot of family and friends here. I’ve thought all year that I would know when I got to this tournament.

“When I was playing my first round, I knew.”

He explained that, although the final decision had come quickly, the process had been a long one: “It’s been a process. It’s certainly not days. Certain parts throughout the year, I’ve thought about it. Just with the way my body feels, with the way that I’m able to feel I compete now, I don’t know that it’s good enough.

“I don’t know that I’ve ever been someone who’s interested in existing on tour. I have a lot of interests and a lot of other things that excite me. I’m looking forward to those.”

Top of his list is his foundation, a youth tennis and learning centre in his home town of Austin: “I’d like to be hands with that and not see it periodically.”

He is certainly going out with a smile on his face: He has always been ready with the quips, the one-liners and the put-downs. The first one came quickly when someone pointed out that 30, these days, is not retirement age in tennis, citing Federer.

Back Roddick came: “I didn’t want to make it through this press conference without a direct comparison to Roger, so thank you for that. But I think wear and tear and miles is something that’s not really an age thing. You know, if you look at my contemporaries that started with me, Roger is the only one that’s still going strong. Frankly, these guys have gotten really, really, really good. I’m not sure that with compromised health that I can do what I want to do right now.”

The reference to, and comparison with, Roger Federer, a direct contemporary of Roddick and a perpetual thorn in his side, was always with the American. Famously, Federer had beaten him four times at Wimbledon, three times in the final. He also beat Roddick in the US Open final of 2006 and twice in the Australian Open semis. They have been rivals their entire professional careers, but friends too.

Only this week, after winning his first-round match here, Roddick talked of the man who had almost certainly stood in the way of more Grand Slams:

“I respect the fact that he lost No1 and he went back and got it. At a certain point the way he’s able to kind of come out here and be motivated day after day, you know, he’s beyond reproach. You can’t really say anything bad about him.”

But the tour and tennis fans have long respected Roddick for his own commitment to the sport. As well as his string of Grand Slam finals—and his US Open title here in 2003—he won 32 titles, including five Masters—all on the North American hard courts. Two of them came only this year, in Atlanta and Eastbourne.

He was also No1 for nine weeks at the end of 2003: His place was taken, inevitably, by Federer.

Roddick’s announcement comes hot on the heels of another former champion, Kim Clijsters, though she handled it very differently. The tour has known for months that Clijsters would bow out at Flushing Meadows—and she did so, with little fuss, after losing to Laura Robson in Round 2. She also lost in the women’s doubles today and has just one more chance to extend her stay in New York via the mixed doubles.

For Roddick, he may make his last appearance, the headliner Friday night match on Arthur Ashe, when he plays Bernard Tomic in his own second round.

But he has already bid farewell—smiling, relaxed and apparently with a weight lifted from his shoulders. “I love my home life, my friends, my wife.

“My dog is going to be excited. I’m not going to be a dead-beat dad anymore (smiling). It will be an adjustment, but hopefully if I ever want to come say hi to you all, they’ll give me a credential.”