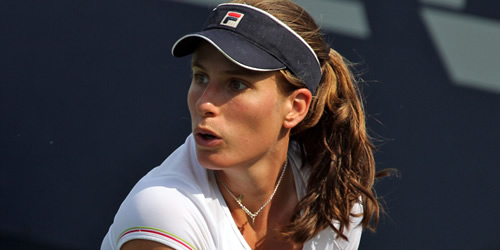 Johanna Konta will be the fourth British woman in the main draw at Flushing Meadows Photo: M Bevis

Things continue to look rosy for the future of British women’s tennis as a new name was yesterday added to the three already in the main US Open draw by right.

The newcomer to the big stage is Johanna Konta, unseeded in the qualifying tournament but taking out first the No8, Kai-Chen Chang, then Kurumi Nara—both matches won in straight sets—before beating the powerful Chinese woman, Shuai Zhang, in three closely-contested sets.

It looked, early on, as though Konta would complete her run through qualifying without dropping a set. She took an early break, served out at the first set, 6-4, and promptly broke Zhang’s opening service game.

However, the Chinese woman is a tough competitor with strong shots from the baseline, and she immediately broke back, and then broke again for a 3-1 lead that she held to the set’s conclusion, 6-3.

Again, Konta took command and it looked all done and dusted when she served for the set at 5-1, but Zhang came back to level at 5-5. This time, Konta held serve and broke to take the match—and her place in main draw—7-5.

Although the 21-year-old Konta was born in Sydney, Australia to Hungarian parents, she has lived in the UK for many years and, once UK citizenship was formalised, she joined the British tennis camp. She is currently ranked just outside the top 200, the fifth Briton, and to date, she has played just four WTA matches—all in Copenhagen—plus her first Grand Slam match this summer at Wimbledon as a wild card.

But judging from her performance in New York, there is plenty more to come from the young woman who stands just shy of 6ft. There are times, in fact, when she looks and plays like the entertaining German, Andrea Petkovic.

She has an attacking style, strong ground strokes and an eagerness to take control of rallies that, on occasion, saw her over-hitting in her final qualifier match. She recovered, though, with impressive focus and that, as much as her firepower, should take her far in the coming year or so.

Her draw, now, is an interesting one: She faces, by coincidence, a Hungarian teenager, Timea Babos, who is enjoying a career-high 59 after making some good inroads into the WTA tour this year. She will pose a challenge for Konta but, win or lose, stay tuned to the newest Brit on the block.

Footnote: Laura Robson’s first-round opponent will be fellow teenager, Samantha Crawford, an American qualifier with no WTA matches to her name. Should Robson advance, she is scheduled to play former US champion, Kim Clijsters.