US Open 2012: The men's draw has been made in New York so it's time to look ahead to the final Grand Slam of the year 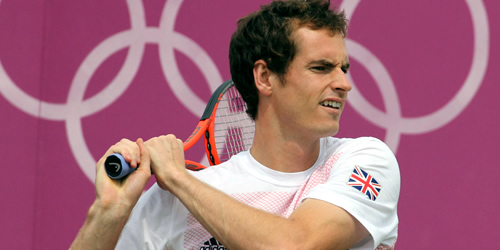 Ever since world No3 Rafael Nadal withdrew from the US Open draw, it was the question on everyone’s lips: Would Andy Murray fall in Roger Federer’s half of the US Open draw or in the Novak Djokovic half?

The question was answered at midday at Flushing Meadows when a pair of white discs were dropped into the glittering silver trophy and the first name out, to take his place in Federer’s half, was Murray. Djokovic—who worked hard to restrain a smile when asked about the fall of dice—has world No5, David Ferrer.

But the form and momentum of Murray was already the talk of the town after his summer of achievements in London. First he reached the final of Wimbledon for the first time—losing to Federer—and then he won Olympic gold on the same court—this time beating Federer.

Murray, of course, has beaten Federer before: Indeed he has a winning head-to-head over him. But when it has come to Grand Slams and the best-of-five format, Federer has held sway.

In two of Murray’s three Grand Slam finals—the first here in New York in 2008 and the second in Australia in 2010—he faced and was beaten by Federer. But London 2012 changed all that and, for good measure, he beat Djokovic in the Olympic semi-finals, too.

Now Murray comes to New York, one of his favourite cities, one of his favourite tennis venues and on his most successful surface—seven of his eight Masters titles have come on outdoor hard courts—as a man tipped to break his Grand Slam duck. All he has to do is beat Federer—and possibly Djokovic—again!

However, Murray has been the only one of the ‘big three’ to miss out on a title in the US Open Series: Djokovic won in Toronto and Federer in Cincinnati while Murray nursed a knee problem.

What’s more, Federer is on a 56-7 win-loss streak this year with a tour-leading six titles to his name, including three Masters and his seventh Wimbledon title.

Djokovic, defending US champion on what he calls his “most preferred surface”, has played every Grand Slam since January 2005 and has not fallen short of the semis since Paris in 2010—and of those nine Slams, six have been finals and four have seen him crowned champion. And while he’s only won three titles compared with 10 last year, his two Masters and the Australian Open were all on hard courts.

And the reason for his smile after the draw: In every outdoor hard court match he has played against Ferrer—including twice at the Australian Open and their only meeting in New York—Djokovic has not so much as dropped a set.

Is there anyone else in his half who can upset the apple cart, or a man who can prevent a Federer-Murray semi-final face-off?

Things start quite nicely for the top seed and five-time US Open champion, which is just as well because things get difficult very quickly.

His first opponent, Donald Young, once touted as a future star of American tennis and breaking the top 40 for the first time at the start of the year, has since put together a shocking win-loss of 2-20.

Federer’s first seed, Fernando Verdasco, has also struggled with form, and has not won a title since 2010, though some of his former success has come in North America and he has twice reached the quarters in New York. He has yet to beat Federer, however.

The fourth round, though, throws up either Gilles Simon or, more likely, Mardy Fish. The American, bouncing back well from a health scare earlier this year, was a semi-finalist in Washington and a quarter-finalist in both Toronto and Cincinnati—in the last of which he met and strongly challenged the eventual champion, Federer. He will also draw confidence from having taken a set off the Swiss in the two meetings before that and beating him in Indian Wells in 2008.

At the bottom of the quarter lies the toughest prospect, Tomas Berdych, who, despite some poorer than usual results this summer, has reached the semis in Winston Salem this week. He also took the first set in his only meeting with Federer this year in Madrid and beat him in Cincinnati last year. The Czech, though, has to get past a couple of other form players—Denis Istomin in the second round and Sam Querrey in the third—to take on the No1.

Murray may have fallen early in Cincinnati and withdrawn with a knee problem in Toronto, but he is looking and sounding a confident man in New York, pounding the ball with a smile against first Stan Wawrinka and then Juan Monaco. But he has an interesting first opponent.

He has played Alex Bogomolov three times, all of them last year, and lost to him in Miami. This year, though, has seen a falling off in Bogomolov’s form. Murray should progress with little trouble, but there a couple of dangerous ‘sleepers’ before a potential match-up with one of the most dangerous players in the draw—especially on fast hard courts—Milos Raonic.

If Murray gets past Thomaz Bellucci and Feliciano Lopez—both big hitters—Raonic is a real challenge who is growing in stature with each month. He beat Murray in Barcelona and has taken Federer to three sets in all three meetings this year. Were it not that Murray is in such confident form, Raonic may well have snatched the quarter-final spot.

As it is, Murray will probably play Jo-Wilfried Tsonga who benefits from an eighth packed with five qualifiers. The Frenchman, though absent for a month with a cut knee, should reach a fourth-round meeting with Marin Cilic with ease for what may prove to be a tight encounter.

As if Ferrer’s task in the latter stages was not hard enough, he has a packed quarter that could push him all the way to his designated semi-final place, a round he has not reached in New York since 2007.

The hard-working Spaniard, though, as he enters his 40th consecutive Grand Slam, is playing as well as he ever has and, for someone associated with clay success, he has made great inroads on hard courts, building an all-court game and a decent serve that always put him in the mix.

His first opponent is Kevin Anderson, a dangerous big-hitter, and the third round poses wild card Lleyton Hewitt or Mikhail Youzhny. Both can play outstanding tennis on a given day, both can do otherwise.

Next, there is more trouble in the shape of one of two men who are on a great run. Richard Gasquet reached the final in Toronto and Tommy Haas reached the finals in Hamburg and the quarters in Toronto. He is also a three-time quarter-finalist in New York since his first appearance in 1996. These two men crossed swords at the US Open in 2008 and it went to the German in five sets.

The highest seed in the top section is Tipsarevic and he too faces some tricky matches to meet Ferrer in the quarters: fellow Serb Viktor Troicki in the third and then John Isner, Philipp Kohlschreiber or Grigor Dimitrov in the fourth.

Remarkably, Ferrer and Tipsarevic have not met since 2008. Ferrer should win, but to reach his first Grand Slam final, he still has Djokovic to beat.

Things open quite comfortably for Djokovic, facing the 69-ranked Paolo Lorenzi in his opener. His first seed is the lowest, No32 Julien Benneteau, who has risen from outside the top 100 a year ago, but the Serb has won their last four matches, dating back to 2007.

The fourth round, however, throws some bigger challenges in Djokovic’s path. He has beaten Wawrinka in their last nine meetings, but the Swiss can blow hot, especially on hard courts, as he did in Cincinnati last week where he beat Raonic.

The alternative may be Alexandr Dolgopolov who played a memorable match against Djokovic here at the same stage last year. The Ukrainian is another player who can blow hot and cold, but at the moment it is the former, with the title in Washington and the quarters this week in Winston Salem.

The top section of this quarter holds Juan Martin del Potro, the winner here in 2009 and making a return to the top this year as the No7 seed. The bronze medallist beat Djokovic at the London Olympics but lost to him last week in Cincinnati and, more worryingly, revealed that he had a left wrist problem that may need medical treatment in the future.

In less than perfect form, he may even struggle against his first round opponent, fellow Argentine David Nalbandian. Although they have played alongside one another in Davis Cup, they have not met across the net since 2008, a season in which Nalbandian dominated.

Other players in Del Potro’s segment include big hitters Ryan Harrison, Andy Roddick and Bernard Tomic but, if his wrist holds up, he should master all of them. If not, there is room for a surprise opponent for Djokovic in the semis.