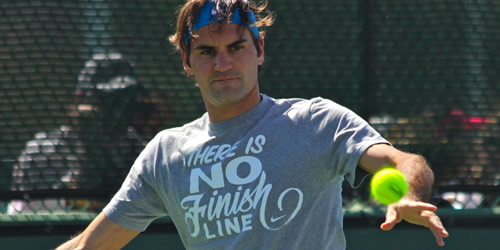 With Roger Federer’s No1 consolidated by his fifth Cincinnati Masters title on Sunday, the five-time US Open champion has been named top seed in the men’s draw when the tournament begins at Flushing Meadows on Monday 28 August.

Federer won the US Open from 2004 to 2008 to share with Pete Sampras and Jimmy Connors the record for most titles won in the Open Era.

Federer heads the man he beat in Cincinnati—defending US Champion Novak Djokovic is seeded No2—and, with Rafael Nadal absent with injury, Andy Murray takes the No3 spot with David Ferrer at No4.

Jo-Wilfried Tsonga, who is back in action this week after cutting open his knee during the Canadian Masters, is seeded No5, with Tomas Berdych at No6 and Juan Martin del Potro at No7. The four Americans in the seedings are headed by No9 at John Isner.

Milos Raonic, who rose three places in the ATP rankings this week, has been rewarded for his late surge by creeping into the top 16 and thus avoids meeting a higher seeded player until at least the fourth round. Conversely Philipp Kohlschreiber, who dropped three places this week, finds himself outside the top 16. However, a late charge by Jeremy Chardy has won him the last seeded place at 32.

Along with Nadal, three other men have withdrawn ahead of Thursday’s draw: Gael Monfils, Juan Ignacio Chela and Juan Carlos Ferrero.

Among the hopefuls competing for 16 places in the main draw via the qualifying rounds are Britons Josh Goodall, ranked 195, and James Ward, No 250. The 128-draw began today and concludes on Friday.