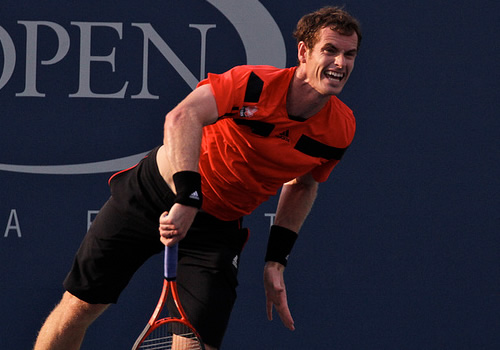 Andy Murray is through to the quarter-finals in New York Photo: Marianne Bevis

Defending champion Andy Murray has not had the easiest of routes to the quarter-finals at this year’s US Open.

His was the last scheduled match of the men’s first round, which was then delayed by rain. He played against the not inconsiderable talent of No49 Michael Llodra, a fast-paced serve and volley play who provides little rhythm. Murray dismissed him with easy haste.

He played his next match in the heat of the day on Armstrong, a fast court in fast conditions where his opponent, Leonardo Mayer, opted for an attacking game that put Murray on the back foot. Mayer won the third set but Murray quickly refocused to claim the fourth set and the match, 6-1.

Then he was back on Ashe but on a punishingly humid, hot day. He played the world No47 Florian Mayer, an unconventional shot-maker with crafty slice and great drop shots. Murray looked drained before he had begun, describing the experience as “tough, tough conditions”. But after the first-set tie-breaker, he took the match comfortably, 6-2, 6-2.

In his favour through all this was that the draw had cleared of seeds: No Juan Monaco, retiring from the tournament ill, and no Nicolas Almagro or Andreas Seppi. The reason for the latter pair was his next opponent, No65 Denis Istomin.

Though the same age, they had met only once, this year in Brisbane, and the man from Uzbekistan had lost, but pushed Murray hard, 6-4, 7-6.

Since breaking into the top 100 in 2009, Istomin had fluctuated up and down the ranking, reaching as high as 33 last year, but always struggled to maintain his level. This year, though, sporting distinctive spectacles, he showed some real form, with scalps like Lleyton Hewitt, Fernando Verdasco, John Isner—twice—and Janko Tipsarevic to his name. He also came close to an upset over Novak Djokovic, taking the first set in the third round of the Montreal Masters.

Murray understood the threat: “Technically he’s very sound. He’s a good player. He hits the ball very flat. He had a very good match with Novak in Montreal. He’s had some good wins this week, as well.”

Istomin also knew what he was up against: “He’s a great returner, he returns almost everything. My key is my serve, so I will try to serve better than usual…I will try to move him more and try to beat him.”

Istomin began strongly with a love hold, and aside from a double fault, Murray began well too. The conditions were tricky, with a strong breeze swirling around, and the rallies were short. Murray was the first to come to the net, and the first to throw in a drop-shot-lob winner. He faced deuce in the fourth game but an ace remedied the situation.

It stayed with serve until the eighth game, and Istomin showed the range of shots, testing Murray with a drop and firing a down the line winner. His bold play brought up two break points and Murray hit a forehand wide to go 3-5 down.

But Istomin tightened up on this biggest stage in tennis, not helped by the crowd roaring their encouragement, as they do at crucial points in a match. He made three straight errors and finished with a double fault to give the break back.

Perhaps to loosen himself up, Istomin attempted a show-boating tweener at the net on Murray’s next serve. He lost the point, but he served much better in the next game and they headed to a tie-break. Istomin lost the first advantage with a backhand error but pulled it back after a long baseline rally went his way. Murray double faulted for the first time since his opening game, then netted a forehand, and conceded the set with a wide backhand.

The match then seemed to turn on a dime: Istomin relaxed rather too much, began to make errors, and Murray started to mix things up. He won 12 out 13 net points—and that from a total of 29 points in the set. His drop-shots were outstanding—indeed both breaks came directly from a winning drop-shot—and his serving soared, too. He took the set, 6-1, in half an hour.

When he broke in the third game of the next set, it looked as though Istomin’s resistance was over, but after two hours of play, he fired two cracking forehand winners for break point and Murray netted a backhand: They were level at 3-3. Murray berated himself but channelled his frustration into the next game—an eight-minute marathon of four deuces—and Murray made the break.

The margins between the two were slim, though it always felt that Murray had another gear. A magnificent running cross-court forehand brought the vocal crowd to its feet, and he claimed the hard-fought set after 50 minutes, 6-4.

Istomin, it must be said, put up more resistance than it looked as though he would when he attempted another hot-dog at the end of the third set: A sly grin suggested this was a lost cause.

But serving first in the fourth, he gave not an inch. If anything, his ground strokes were as solid and deep as at the start of the match. They began to force Murray into rash net advances and a few errors. He could not break through until they stood at 4-4 and then two Istomin errors gave him an opening. A tired forehand into the net-post gave Murray two break points and a shanked forehand ballooned into court to draw the fatal error.

All he had to do was serve out the set, and he did so with a flourish of an overhead winner in just over three hours.

Murray will face Stan Wawrinka in the quarters, a man he leads 8-5 in previous matches but who beat him in New York in 2010 in a riveting four-setter. Wawrinka also won their most recent meeting, dropping just three games at the Monte-Carlo Masters.

The No9 seeded Wawrinka beat the No5 seed Tomas Berdych in a rip-roaring four-setter in which he hit 14 aces and made 36 winners to Berdych’s 32. Wawrinka twice failed to serve out the third set, and had to fight back from 1-4 down in the tie-break before taking his two-sets-to-one lead with an ace.

Murray said of the contest: “I’ll need to play a good match. He’s improved I think this year quite a bit. Some of the things he didn’t do so well before he’s improved. So he has fewer weaknesses. He’s more experienced now. He has a very good backhand. He serves well. He’s solid up at the net. He makes a lot of returns. He makes it very tricky for you. He’s a top player. It will be a very tough match for me.”

It will also be a match worth watching, possibly the quarter-final of the tournament.