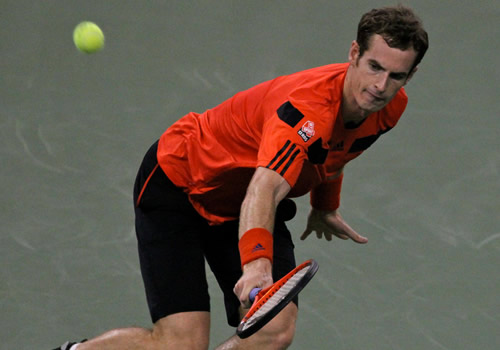 Andy Murray next faces Leonardo Mayer at the US Open Photo: Marianne Bevis

As if Andy Murray didn’t face enough hurdles in defending his first Grand Slam title in New York, he had to wait out both an unfriendly schedule and the notoriously capricious weather of the US Open as well.

The lasts Major of the year has many unique features, among them that the opening round is spread over three days. Usually a ‘big name’ is saved for the first Wednesday’s showcase day session at Flushing Meadows, but this year, the reigning champion headlined the night session.

Murray was due, then, to play his first match—a tricky one against a man renowned for his fast-court, serve-and-volley skills, Michael Llodra—in the knowledge that his biggest rivals were already comfortably through. On the other side of the draw, Rafael Nadal was done and dusted on Monday afternoon, while Roger Federer’s rain-postponed match was played in brilliant Tuesday sunshine. Most significant of all, the man at the top of Murray’s half, world No1 Novak Djokovic, had the prime slot on Tuesday night, early enough to be tucked up in bed on the right side of midnight.

With what, in retrospect, became an unfortunate sense of timing, the USTA announced only last week that it had succumbed to pressure—and this region’s late summer weather patterns—and agreed to plans to build a roof over the Arthur Ashe stadium. For the last five years, the finals have been forced to a third Monday by storms either before or during the concluding weekend.

But this week, the schedulers have been caught out by early rain—and so has Murray.

Only five matches were completed—in around an hour and half—before the rain arrived to hand over Flushing Meadows all afternoon.

Eventually, a new schedule was announced that excised all the planned doubles matches as well as Serena Williams’ second-round match, due to be played after Juan Martin del Potro’s first-round match, in the Ashe day session. But that still left uncertainty over when and if Murray would get to play his evening match.

To add further to the complications, the No6 seed del Potro, scheduled to meet Djokovic in the quarters, was extended rather more than anticipated by Guillermo Garcia-Lopez, a flashy player who can blow hot and cold, and chose to blow hot against the 2009 champion. The Argentine won the first set, only to lose a second-set tie-break. Del Potro took the third but then the Spaniard broke in the fourth. Del Potro broke back and they headed to a tie-break after almost four hours of play.

Theirs was, in fact, lovely tennis: full of shot-making, angle, power and variety. Yet outside Ashe were thousands waiting with their night-session tickets, and now more than two hours overdue.

By now, every other first-round match was either completed or underway. Murray, though,waited it out with the fans, no doubt praying to any god that would listen to keep the rain away.

Even Del Potro’s tie-break was tight, edging through a quarter of an hour to a 9-7 conclusion in the Argentine’s favour. It was 9.30pm, and merely the end of the ‘day’ session.

But what of Murray’s opponent, also kicking his heels as the hours crept by? The Briton had met the left-handed Llodra three times before and beaten him in each match, including a close four-setter here in 2008. But their most recent match, at the Australian Open last year, was an easy three-setter to Murray.

For the Frenchman’s metier is the fast indoor environment or grass, the surfaces where the bulk of his titles and finals have come. The 33-year-old’s game is cut from some old-fashioned cloth, a net player par excellence and with a single-handed backhand slice to die for. It’s a style that can rattle an opponent when on song, as it certainly was for most of this match.

Murray started sharp and he needed to be. Llodra opened with a double fault but the two were soon into rattling exchanges at the net. Murray’s athleticism took snatched a quick break and he held to lead 2-0, but Llodra kept playing the only way he knows how, coming in at every opportunity, even on Murray’s serve.

The games raced by in fast and furious exchanges that seemed if anything to sharpen Murray further. He chased down every ball in the seventh game to break again and held for the set, 6-2. He had made not a single unforced error.

Llodra, though, was pin sharp and looked fitter than in some time—he has carried the odd shoulder injury of late. He had Murray scurrying to the net, racing back for lobs and floundering in the face of cross-court smashes. The Frenchman broke and held to lead 3-0 in a truly purple patch of tennis, but Murray’s speed and all-court skills lived through the storm and he began to get a better read on the Llodra game. As a result, the returns from Murray dipped at the feet of the incoming Frenchman time and again, forcing increasing number of errors on the volley.

The margins were slim, but Murray was gradually dominating proceedings, and he broke twice to take five straight games and finally served out the second set, 6-4.

Still Llodra pressed, drew some stunning exchanges from Murray, and demanded near-perfect passing shots. One such, a cross-court return-of-serve winner, made the first break, and that was enough. The last couple of games brought out the showman in Llodra: an under-arm serve, a couple of flamboyant volleys and a dive to the court marked the final game, with Murray fully involved in the fun. The Briton’s face even broke into a grin as he brought up one final break point, and took it with alacrity. Set and match, 6-3, to the defending champion, and smiles and pats on the back at the net.

Murray was fast to his press commitments, fast in his praise of his opponent and pleased to have played so well in such a fast-paced match. And in the end, despite all the delays, he finished on the right side of midnight, still on Wednesday.

The USTA announced that the start time for this crackerjack match had been the third latest for a US Open night session in recorded history. Yet in the end, Murray’s was not last first round match to complete: James Blake had yet to bid farewell to New York and to tennis in a final set tie-break against Ivo Karlovic. Appropriate, perhaps, that his last was the last.

A bitter-sweet end, then, to the first round of the 2013 US Open—Murray, who next plays Leonardo Mayer, will be hoping rain does not stop play again.

“I don’t have a preference. I just want to get my matches on at the right times.”