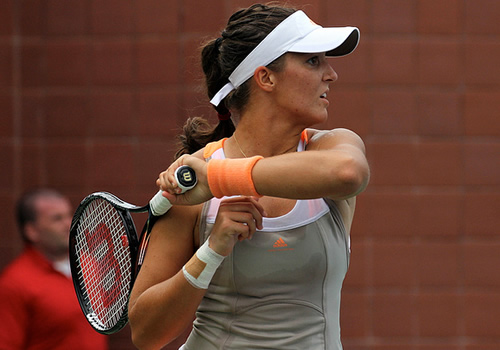 Right from the start, Laura Robson showed she was a woman who enjoyed the big occasion and the big stage: the Grand Slam stage, in particular.

In her first US Open main draw in 2011, aged just 17, she came through qualifying to reach the second round.

Then last year, she made her biggest breakthrough with her run to the fourth round. It was on the biggest of stages, Arthur Ashe, that she took out a Kim Clijsters in the former champion’s last tournament.

Robson was on Grandstand when she took out No8 seed Na Li. She finally succumbed to defending champion, Sam Stosur, but an impression she had most definitely made.

From there, she reached her first tour final in Guangzhou and ended the year at a career-high 53, a jump of almost 100 in a year: It earned her the WTA Newcomer of the Year award.

Robson went on to reach the third round at the Australian Open, ousting No8 seed Petra Kvitova, turned around a succession of first-round defeats to beat her first top-five player in Agnieszka Radwanska in Madrid, and followed that with a win over Venus Williams in Rome.

She lost to Serena Williams in the next round, but the world No1 was fulsome in her praise of Robson afterwards: “I knew she had a lot of potential, but playing against her, I can see she has even more potential than I thought. I think it helps that she’s a leftie, too, and she’s just so relaxed, and that adds another dimension to your game. I think what’s really good about her is she doesn’t have too many weak points. It’s always a good sign of a future champion.”

Once again, in what had become a recurring pattern, Robson drew a big name in the first round of a Grand Slam, and lost to Caroline Wozniacki at the French Open, but Wimbledon was on the horizon and, sure enough, she rose to the occasion with a vengeance, beating No10 Maria Kirilenko on her way to another fourth-round finish.

It’s easy to forget Robson is still only 19, but she is the highest ranked teenager in the top 100 and the youngest seed—her first time, incidentally—in the US draw. For her run in London took her to a career-high of 27. And had she not been forced out of most the US Open Series with a wrist injury, she may well have been higher.

As it was, her preparation coming back to where her surge began was thin—not that it took her long to find the range and rhythm in her big, powerful game. Her first opponent, the No-52 ranked Lourdes Dominguez Lino, was an experienced and crafty player, but Robson toughed out a 7-5 first set before turning up the volume for a 6-0 conclusion.

Next in line was fellow 19-year-old, the French Caroline Garcia, similar in many ways—indeed with an almost identical number of career match-wins—except in the quality of her wins. She had scored just one over a top-50 opponent, the 47-ranked Jie Zheng.

So while they had never played before, Robson was favourite to advance—with the added incentive, perhaps, of another chance to take on Li in the third round.

The first question for both was how they would handle their nerves on a rain-disrupted Wednesday. They came onto court on time, warmed up and promptly left as droplets peppered the court. Storms were on the radar and, despite a false dawn after a couple of hours—enough, indeed, for Juan del Potro to play three games on Arthur Ashe—it would be almost six hours before the match got under way.

The question was quickly answered: Both women were rock solid, and they pounded their way through a half-hour first set in which both threw in love holds of serve and neither managed to earn a break point. By half way through the set, they had 12 points apiece and identical stats across the board.

Robson had a glimmer of a chance in the eighth game, making two winning forehands to go 30-0 against serve, but Garcia remedied the situation to hold. She faltered only once, in fact, serving at 4-5, and conceded the first break point of the set from the first deuce, and Robson forced the error for the set, 6-4.

Robson was moving and hitting cleanly and confidently, so it was a surprise to see her call the trainer. In the event, she simply wanted her troublesome right wrist re-taped, took some pain-killers, and returned to the fray with just as much vim.

Again she opened serve and did so very well. By 3-2, she had made not one double fault to five aces—though in fairness, Garcia had served only one for her five aces. But Robson began to edge a slight lead in winners, striking from the baseline to the corners with perfect depth. Even so, it was just a point here and there that separated them.

Robson has rarely looked more confident, and it showed in her serving: her hold in the seventh was with a cracking 110mph ace down the T.

After 70 minutes, they remained locked at 4-4, and again Robson held with an ace, now up to eight for the match. Garcia, too, held and then played some superb defence, chasing down big Robson ground-strokes, and even a lob, before making a stunning backhand cross-court winner to bring up three break points. Robson saved one, but her first double fault of the match conceded the second.

Garcia looked odds-on to take the set, going 40-15 with a couple of forehand winners, but Robson kept up the attack, closed to deuce and broke back with a return-of-serve bullet. It would take a tiebreak, and that was just as intensely contested as the rest of the match.

Garcia went 2-0 before Robson came back with a couple of searing backhands. Helped by a double fault, the Briton took a 6-2 lead but Garcia responded boldly, pulling points back with an angled touch volley and a down-the-line winner. But at the last, Robson’s serve sealed the set and match, 7-5.

It was a fine contest between near mirror-images of each other. If there was a telling advantage for Robson, it was her weight of shot from the baseline, backed up by one of her best serving performances in a long while. But Garcia had the edge in speed of foot and retrieval, and showed some deft touch at the net.

If both continue to develop from their current levels, theirs could unfold into a close and compelling rivalry.

For now, Robson moves on to Li once again, and on the basis of this form, without fear.