US Open 2013: Rafael Nadal will take on Novak Djokovic in Monday's final after beating Richard Gasquet in straight sets in New York 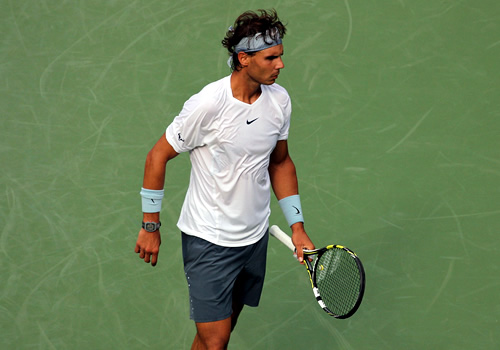 Rafael Nadal admits he would prefer not to be coming up against Novak Djokovic in the US Open final – but vowed to give it his all against the world No1.

The Spaniard booked his place in Monday’s showpiece in New York with a commanding 6-4 7-6 (7-1) 6-2 victory over Richard Gasquet on Saturday night to extend his unbeaten run on hard courts this year to 21 matches.

And although the 27-year-old is aware that his showdowns with Djokovic are often thrilling for fans, he concedes that he would rather be facing another opponent and not the top seed.

“I played against him a lot of times. We always played very exciting matches. When you play, when you are involved in these kind of matches, you feel special.

“And at the end, even if I lost that final in Australia [in January], I feel happy to be involved in that match. The semi-final at Roland Garros this year was very emotional, too.

“It is good if both of us. We are playing at very good level so the match becomes great because we play long rallies, we bring our game to the limit, and it becomes a very difficult match for both of us.

“I hope to be ready for that. I need to keep playing very aggressive and play a very, very good match.”

Djokovic booked his place in the final at Flushing Meadows with a battling 2-6 7-6 (7-4) 3-6 6-3 6-4 victory over Andy Murray’s conqueror Stanislas Wawrinka.

And the Serb, who won the US Open title in 2011, is braced for another gruelling encounter against Nadal.

“[Facing Nadal] is the biggest challenge that you can have in our sport now,” said Djokovic. “He’s the ultimate competitor out there. He’s fighting for every ball and he’s playing probably the best tennis that he ever played on hard courts.

“He hasn’t lost a match on hard court this year, and we all knew that over the course of last six, seven, eight years, hard court hasn’t been his favourite surface.

“He has got injuries, many injuries on this surface, but now he looks fit. He had seven months off. He lost three matches this year.

“So the way he’s been playing he’s very confident, but I know how to play him. Hard court is the surface that is my most successful surface. I have played him already here twice in the finals. I know what I need to do.

“Now it’s of course easier to sit here and say, I know what I need to do, but I’ve got to do it on the court.

“I’ll be ready to give everything I have for the trophy.”