US Open 2013: Rafael Nadal’s year since he returned to the tennis tour after the Australian Open has been nothing short of remarkable 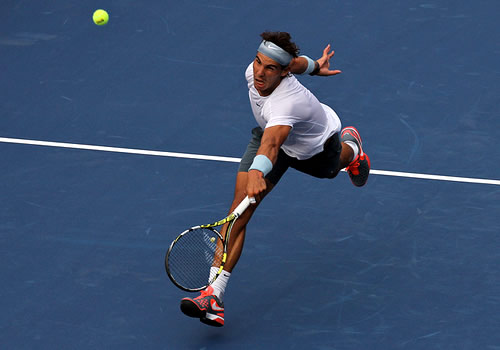 Rafael Nadal is through to the fourth round in New York Photo: Marianne Bevis

There comes a point when there is little more that can be added to what has already been said. Quite simply, Rafael Nadal’s year since he returned to the tennis tour after the Australian Open has been nothing short of remarkable.

There was the 12-1 Golden Swing to start. Then came the title in Indian Wells that announced an unprecedented North American hard court run which extended through the US Open swing—with titles in Montreal and Cincinnati—to record an unbeaten 15 wins.

Naturally on the European clay, he won Barcelona, Rome and Madrid followed by an eighth French Open. The only blot on his year was a shock first-round loss at Wimbledon: He has not lost a match since.

Having reclaimed the No2 ranking in time for the US Open draw, he could now get back to No1 by the tournament’s end, and he has already cleared the first three hurdles with consummate ease.

In Round 1, he dropped eight games against Ryan Harrison and in Round 2 only three against Rogerio Dutra Silva. He faced a tougher opponent in the third, the 38-ranked Ivan Dodig, who beat him the last time they met, on the very similar hard courts of Montreal, taking the second and third sets in tie-breakers.

Dodig is a muscular, powerful and hard-working player, and beat considerable competition to meet Nadal—Fernando Verdasco and Nikokay Davydenko. Yet on a hot and sultry afternoon on Arthur Ashe, filled to the brim by Rafa supporters, it seemed, he advanced unbroken through three straight-forward sets.

He hit 37 winners, won 14 out of 17 points at the net, and has dropped neither a set nor his serve on his way to the fourth round. The 2010 champion still seems less than satisfied with how he is playing, willing to concede has “served OK” but claiming he must “improve a little bit of everything…if you are not playing your best, to win is impossible.”

As always—and no-one who has watched Nadal play for the shortest of times could dispute it—he said he would “try my best”.

So, for now, nothing needs adding to the Nadal story—except that he is now on an 18-match run. Instead, here are a few choice quotes and photos that say it all. 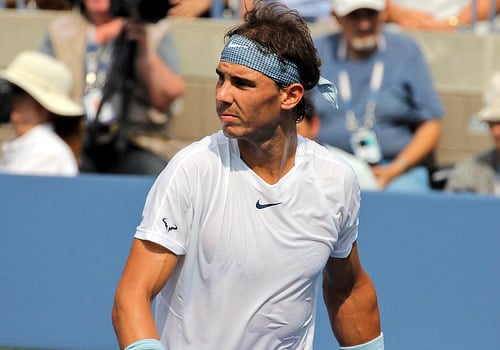 Rafael Nadal could reclaim the No1 ranking at the US Open (Photo: Marianne Bevis)

“To be able to win against [Dodig] in straight sets is great news. I played better today than in the previous matches. Always a positive thing. Tomorrow I have another day for practice and to be better for the match of Monday. So that’s all.”

Asked about his perfect service record: “It will happen. No worries.”

He continued: “I didn’t feel that I was serving great that first three days. That’s the real thing. I served okay, not bad. First day I didn’t serve very well. Second day and third day I was able to play a little bit better. In important moments I did a few good serves, but I am winning because I am playing well from the baseline and I am making the right decisions in the right moments. It’s something I am going to work a little bit more tomorrow. I need to serve a little bit better, and I hope I gonna do good.”

His assessment after his 6-2, 6-1, 6-0 win: “I started a little bit too slow, in my opinion. Then during the match I tried to play better and better every time. I think I finished the match playing well, doing a few things well, moving myself better. Important thing at the end is winning 6-2, 6-1, 6-Love.”

On coming back stronger after his absence: “When you are coming back after a hard times, after an injury, after moments that you are not well, is true to be back you need to work hard. You need to work with the right attitude every day. You need to be ready to suffer, to enjoy the suffering, and to be able to change the situation.

“But when you are in a low position, low situation, you are able to work and work to change that dynamic, is because you really feel the love for sport, the passion for sport. When you are back and you have the right feelings on court, then you change the dynamic.

“After overcoming a tough situation, then you are ready to compete better than before. That’s something that I am sure. All my life I played with lot of passion. I love the sport. I love the competition. Not only tennis. I love the tennis, sure, but I love the competition in general. I love the sport like a spectator. So have a chance to go on court in big stadiums that I saw on the TV when I was a kid, always is really special for me. So I feel very lucky and very happy to be back on the tour and playing well again.”