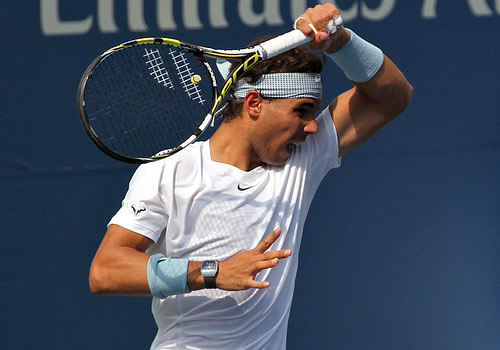 Rafael Nadal is through to the last four at Flushing Meadows Photo: Marianne Bevis

The draw for the US Open promised the first-ever meeting in New York between Rafael Nadal and Roger Federer after 31 career matches. But it was not to be.

Federer, after a week of near clockwork Swiss timing, wilted in the 91 percent humidity, away from the Arthur Ashe stadium for the first time in exactly seven years, and lost in straight sets to the No19 seed, Tommy Robredo.

But the meetings between Nadal and Federer have always been highly anticipated because, for all Federer’s dominance in Grand Slam tennis—17 Major titles—he had faced, in Nadal, his nemesis. In 21 of their 31 matches, including eight of their 10 Grand Slam meetings, Nadal had come out the winner—Federer has not beaten him in a Major since Wimbledon 2007.

The left-handed Nadal early on found the Federer Achilles heel against the huge and heavy top-spin that his forehand could generate across a tennis court: It was Federer’s single-handed backhand. The height, spin and swinging trajectory of that Nadal cross-court shot, pounded time after time at the Swiss backhand wing, drew enough errors or defensive returns to prise open the Federer game, and with every match they played, the Nadal tactic and execution improved despite Federer developing better ways of returning it.

So effective did the tactic become that every other player looked and learned. The most recent of those was Robredo, who directed the majority of his shots to the Federer backhand to draw either an error or to open the forehand court for a winning play. The statistics showed that 21 of Federer’s 36 forced errors came from the backhand, plus another 21 unforced errors.

It was, it should be said, an atypical performance from Federer in which 14 of 16 break chances went unconverted and 20 of 50 net points were lost.

And the Robredo victory won him the dubious pleasure of being on the receiving end of that same treatment. For in a curious alignment of the draw, six men with a single-handed backhand made the fourth round and four of them took a place in each of the quarters. Nadal faced a different one of them at each stage and, even more unusual, could anticipate a third in the semi-finals.

How would the others fair?

First up was Philipp Kohlschreiber, whose elegant all-court game had already taken out the big serving and forehand of John Isner. The German, seeded 22, can cut his way through the most able as well as the most powerful of players when his flat and angled hitting, volleying and touch game are on song. And he played at his best level to take the first set tie-break—though Nadal, like Federer the same day, let a mass of break points go begging.

Kohlschrieber’s break-neck tennis produced 20 winners but 21 errors in that opening set before Nadal regrouped to make twice as many winners as errors in the three remaining sets. The Spaniard accelerated away, even though the German continued his high level of play, 6-4, 6-3, 6-1, to extend Nadal’s record against the German to 10-1.

Coming into his match against countryman Robredo, Nadal held a 6-0 win-loss record and he had dropped only one set along the way.

By the time they met, Nadal’s forehand was already proving to be in fearsome shape. He had made 78 forehand winners, plus 80 percent of his net approaches—a rapidly increasing element in the Nadal game—and through each match had made far more winners than errors.

He began in truly intimidating form. The first set took 22 minutes, 6-0, 24 points to five, with only three unforced errors. He reeled off two more games before Robredo got on the board in the second set, and went on to seal it, 6-2, in 39 minutes. By now, Nadal had made 15 winners on his forehand.

The third set? Another 39 minutes, another 6-2 scoreline, eight out of nine points won at the net, twice as many winners as as errors, twice as many points as his opponent. He made not a single double fault nor offered up a single break point.

So what hope for his third single-handed opponent? Like Robredo, who returned this year to his best form and best ranking in over three years, Richard Gasquet has been on a rising trajectory, and back close to the level he achieved as a precociously talented 20-year-old. Returned to the top 10, he has won two hard-court titles this year and reached the semis in Miami with a win over Tomas Berdych. Here in New York, he scored a brilliant victory over No10 seed Milos Raonic, 7-5 in the final set—the longest match of the tournament—and today reached the semis of the US Open for the first time in another five-setter over one of the most resilient players on the tour, David Ferrer.

Gasquet has one of the most destructive backhands among the single-handed variety, a searing weapon of a shot, particularly when flattened out down the line. Against Ferrer, he made 21 winners off that wing compared with 14 off the forehand, and attacked the net with greater alacrity than ever: 30 points won from 45 approaches.

But his backhand winners come through the ball at chest-height and, as Federer knows, Nadal’s forehand leaps from the court well above shoulder height. The reason, perhaps, that Gasquet, like Robredo, has never beaten Nadal, while Kohlschreiber’s only win in 10 came at Halle last summer, weeks before Nadal took his extended absence from the tour with knee problems.

Frankly, though, there are few players of any persuasion—single-handed or double-fisted, tall and powerful or small and nimble, tactically brilliant or resilient battlers—who are making an impression on the Nadal who has arrived in New York this year.

Since he returned to the tour in February with a 12-1 run in the Golden swing, he has been unbeaten on hard courts. It started with the Indian Wells title, continued after his shock Wimbledon exit with the Montreal and Cincinnati titles, and has now reached 19-0.

He has lost only three matches out of 60 this year, and only one to a top-10 player: Djokovic in the Monte Carlo final. He has won nine titles from 11 finals, including the French Open and five Masters. But what is most impressive—and most worrying for the rest—is that he has moved his game up a notch in several tactical areas. He has become more offensive tactically, determined to take control early and keep points shorter. His serving is accurate, his volleying frequent, his drop-shots more lethal—and the passion to win burns brighter than ever. Absence, it seems, has made the heart grow even fonder.

This Nadal, then, is a still-evolving tennis-player, but at his core remains that devastating top-spin forehand, and he will continue to deploy it with particular relish against those one-handers—and Gasquet is the next in the firing line.