US Open 2013: Roger Federer enters his 56th straight Major ranked outside the top four for the first time in more than a decade 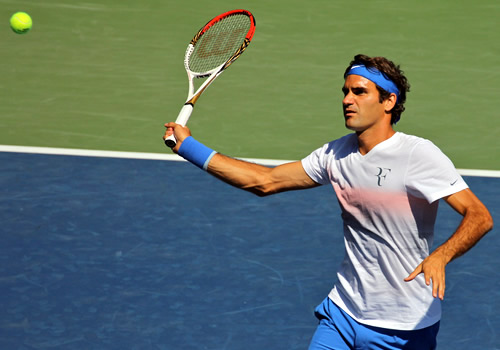 Five-time US Open champion, Roger Federer, must know the Billie Jean National Tennis Centre like the back of his hand.

He first came here in 2000 and has not missed an Open since. When he takes to court in the headline night match on opening Monday, it will mark his 14th consecutive year here.

Back when it started, still a teenager but already ranked No40, he was beaten by the No12 seed, Juan Carlos Ferrero, in the third round, and would not fall so early ever again. After three fourth-round exits, he finished on the winner’s podium for the next five years.

By the time he won his first US title, he was already No1 in the world and would stay there for the duration of his residency as champion. He was also the top seed the next year, 2009, when he finished runner-up to Juan Martin del Potro. He was No2 when he lost in the semis to Novak Djokovic in 2010, and then No3 in 2011 when he lost—again in the semis and in five sets—to Djokovic. Last year, he was at the top of the draw again, though lost to Tomas Berdych in the quarters.

But now, as he is constantly reminded, he enters his 56th consecutive Grand Slam ranked outside the top four for the first time in more than a decade. For his towering 2012—with the Wimbledon title and Olympic silver just part of his six-title haul—has proved a hard act to follow.

He knew it would be. He announced a schedule trimmed of Doha and Miami, and admitted in Dubai that he needed to recharge his batteries, work out new goals, and get more time on the practice courts. What he didn’t predict was the back spasm that hit him soon after in Indian Wells, and he struggled to compete in losing to Rafael Nadal in the quarters.

In his next tournament, Madrid, he fell in his second match. However, worse was to come. At Wimbledon, he made his earliest exit from a Major since 2003, falling in the second round to the 116-ranked Sergiy Stakhovsky.

It prompted his late entry into clay events in Hamburg and Gstaad and trials of a newer, bigger racket, but he was again hampered by a back problem, and again fell to low-ranked opposition.

Federer’s woes increasingly became the tennis topic of choice through the summer, especially as his 32nd birthday came and went with his withdrawal from Montreal and his slip in the rankings.

Throughout, though, Federer has not wavered in his message: His work rate, ambition and desire, he insists, are undimmed—he has no plans to go anywhere just yet.

Only this week, Michael Steinberger in the New York Times magazine reported Federer thus: “I enjoy training hard, the travel, I like playing for the history books, and I just like playing on a full centre court in front of the people…I like it all, and I don’t just want to leave.”

No matter: This will continue to be a rich vein to be mined throughout the US Open and, regardless of the outcome, well beyond it.

His pre-tournament press conference began with questions he must answer in his sleep—he has been doing this, and with almost as much deftness of touch, as when he captured his first title.

What about Nadal’s run on the hard courts this summer?

“I’m clearly very impressed, especially seeing him play really well on the quicker hard courts…There were a lot of question marks when he came back, especially people thought he was just going to play [mostly] on the clay courts, and just some hard courts. [But] he’s playing a full schedule, and he’s had an incredible season so far. So, I mean, it’s super impressive.”

What about facing Nadal in the quarters here for the first time? First came the regular ‘round-by-round’ response.

“I think it’s an exciting draw really, the section…I really hope from my side that I can make it. That’s really my focus there. You always expect the other guys to make it anyway, so for me it’s really round by round, like for any other player as well.”

Then came the first probe into his No7 ranking, astutely couched in a Djokovic comment about the changing lifecycle of new players. Federer’s answer was far from dismissive, though played with a straight bat: “No7 I don’t think is a huge drop from No4, but people are going to say what they like. Important is that I concentrate on my game and that the passion is there, that I work the right way, that I’m prepared, and then that I feel like I can win a tournament. Then the ranking actually itself is secondary.”

But he revealed a little more: “I have looked at the rankings my whole life. I used to be incredibly excited on Monday seeing how many spots my ranking went up or down. The older you get the less you pay a bit of attention about it. But nevertheless, clearly I want to move up from here. I only have the quarters to defend, so I hope I can add some points to the rankings.”

It was a subtle, and rather less than common, admission that his ranking is very much on his radar.

Then an enquiry about his try-out of a new racket had the same effect. First the matter-of-fact: “I will test more rackets again after the Open. It was just a difficult spell I went through in Hamburg and Gstaad when I started playing with the new prototype from Wilson. And having the bad back, it was just like—I couldn’t really, you know, sort of get comfortable enough or know about it enough to be quite honest.”

And he went on—to answer the question that hadn’t been asked—but the one most had on the tip of their tongues.

“My mind was with my back more than anything else. I’m happy that I’m playing well again. My confidence is back, you know? Also the confidence is back in my movement. I’ll go back to the racket I know, the racket I have won everything with, play with that one for these weeks now, and then we will look again at the situation after the US Open, how it is.”

Still he was not done, and elaborated on how he manages a condition that has, in fact, dogged him for years. One example: the only time he failed to make it past the round-robin stage of the World Tour Finals, in 2008, he received treatment on court, but he completed the match—as he has done with every match he has ever started. So some insight into how he has maintained such physical durability was worth hearing.

“I think you warm up more as you get older just because you feel that’s the right thing to do. I mean, when I was younger, I used to jump up and down for five minutes and then walk on court.

“Today it’s just a bit different. I don’t know if the youngsters are still doing that today—I think the whole game in those 10, 15 years has become more professional…then also because of all the matches I have played, I approach tournaments slightly different than when I had no experience back in the day. In terms of work ethic, I think it’s always been a lot for me. I have always worked really hard. Never really talked about it, to be honest. But I have put in the hard work so many years, and that definitely keeps my base at a very high level.

“It’s just important when I do feel well I can also train well and do the right things on the practice court and on the gym, and also for rehab maybe stretching, sleep, nutrition, whatever you can do to save some energy or recover quicker.

“When I was younger I had incredible muscle pain like I could hardly get out of bed, or all of a sudden the back was really bothering me, you know, for a day or two, and then all of a sudden it disappeared the way it came, just really quick. Today you feel it coming. So I think it’s actually more comfortable today with the body than it has been in the past, to be honest.

“So now I can really say I’m really just focused on the point for point, and that’s why I’m not concerned. My back problem is not that major. I just need to make sure I don’t have any bad moments in the future.”

It’s music to the ears of Federer fans, but it also attempts to lay to rest the misconception that his tennis is, somehow, effortless. It’s an image oft repeated, often using the evidence of his warm-ups before a match. And certainly, alongside the intense pre-match preparation of Nadal, Federer’s easy, going-through-the motions warm-up is, well just that: a warm-up.

But watch Federer practise during the build-up to a tournament and it is a different story. Ask Haas how lightweight their session felt yesterday. Or ask the fans who gasped as another ‘practice’ serve was slotted away at an absurd angle. Or watch his volleying workout: a rapid-fire, sharp-hitting master-class designed to underpin his growing tactical aggression, to shorten points and to wrench back control of his matches and his ranking.

His near-miss against Nadal in the Cincinnati quarters was a clear pointer that the Federer fitness and movement seem back on track, even if his concentration still looked awry after too little match-play. And his expansive responses ahead of his first match in New York suggest he is ready for the fray—and, he hopes, for Nadal.

After almost half an hour, with more Q and As in other languages, he was ready to leave, but even the most titled man at this year’s US Open had to take second place to the First Lady.

Of all places for him to be trapped when Michelle Obama made her departure from Saturday’s Kids Day, it was in the lion’s den, the main interview room, still surrounded by journalists, microphones and cameras.

His solution? Spin his racket and carry on chatting. When it comes to his PR style, it really does seem effortless.

Marion Bartoli refuses to rule out return to tennis