Marianne Bevis rounds up some of the top quotes, facts and stats as the 132nd US Open gets under way in New York 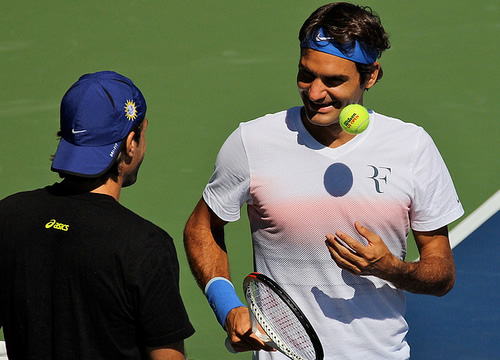 Roger Federer is all smiles during a practice session at Flushing Meadows Photo: Marianne Bevis

From Roger Federer to Rafael Nadal, Venus Williams to Laura Robson, here are some of the top quotes, facts and stats as the 132nd US Open gets under way.

Laura Robson, asked what she liked about fellow Brit Dan Evans, who scored a surprise winner over Kei Nishikori: “He’s got a Jesus tattoo. I mean, if you’ve ever spoken to him, he’s really not the most religious person!” 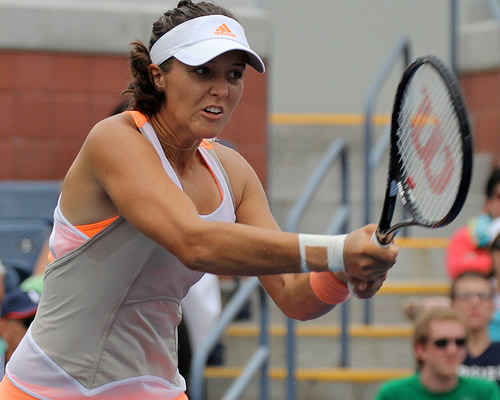 Laura Robson won through to round two at Flushing Meadows on Monday (Photo: Marianne Bevis)

And Dan’s reply: “I’m not sure on her hairstyle sometimes, but, hey.” (Smiling).

Venus Williams, who beat No12 seed Kirsten Flipkens on the opening day, is playing in her 60th main draw, while Francesca Schiavone, beaten by sister Serena Williams, has the longest Grand Slam run: This was her 53rd consecutive Major since her debut at the 2000 US Open.
Roger Federer and Lleyton Hewitt are playing in their 58th main draw, but Federer has the longest run of 56 consecutive Majors, now tied in first place with Wayne Ferreira for the Open era record.

James Blake, in announcing his retirement after the US Open and 14 years in tennis:

“You know, there are so many athletes that say they can never replace that feeling of having that adrenalin rush, but I get more of an adrenalin rush now seeing my daughter wake up in the morning. That’s something that I’m truly looking forward to, being able to spend more time with my wife and daughter.”

World No5 Sara Errani and No13 Roberta Vinci are together the No1 women’s doubles team. They have both played 105 main draw matches this year (singles and doubles), the most of any US Open seeds.

The Bryan brothers are aiming to win the first calendar-year doubles Grand Slam since 1951, having become the first team to hold all four titles at the same time in the Open era with the 2013 Wimbledon title.

Roger Federer, asked how he feels in the morning compared with earlier in his career?

“Feel better today, believe it or not. When I was younger I had incredible muscle pain like I could hardly get out of bed back then, or all of a sudden the back was really bothering me for a day or two, and then all of a sudden it disappeared the way it came, just really quick. Today you feel it coming…”

A spiky Rafael Nadal, asked if the hard courts were tough on the body: 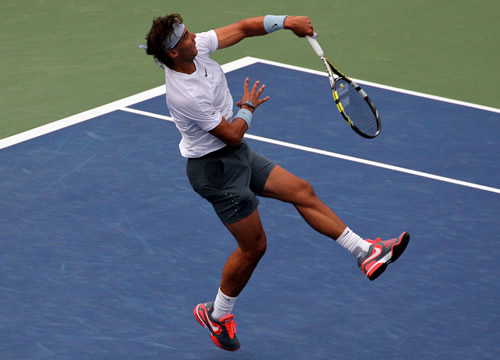 Rafael Nadal is through to round two in New York (Photo: Marianne Bevis)

And then asked how surprised by the success of his season:

“I get tired to ask this question, because every time is the same. Seems like after all the things that happened to me, it seems like it’s strange somebody can think strange that I will repeat the same.”

Serena Williams has achieved the most match-wins this year, 60 for just four losses, as well as the longest winning streak this year, at 34 (including 24 sets in a row), to score eight titles from 10 finals.

Serena Williams, asked if winning another Grand Slam would make the year complete:

Rafael Nadal has now compiled a 54-3 match record, winning nine titles from 11 finals in 12 tournaments, including a Grand Slam and five Masters—and he did not join the tour until February.

Nadal, asked if he would consider a gluten-free diet:

“I always had the theory that most important thing is be happy, enjoy what are you doing, and be fresh mentally. Not all the players who had success in history had the same diet or had the same style of play. Everybody’s different. Now seems like the gluten-free diet is great. After three or four years we will find another thing that will be great, too. Then the gluten-free will not work anymore…Personally I am not doing. I am happy with the normal diet.”