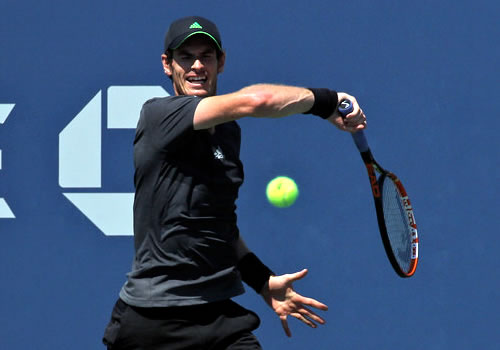 Before the gates were opened to the hoards arriving in party mood on the first day of Labor Day weekend in New York, Andy Murray was returning to the scene of his opening-round distress.

It was Louis Armstrong stadium, where he had endured cramps through his entire body before he finally closed out a tough match in tough hot conditions in four sets against Robin Haase. The fact that this same court had been the scene of a near exit to the same player in 2011 had not made the experience any better.

So when the schedule placed the No8 seed on Armstrong for his third-round match against the up-and-coming 23-year-old Andrey Kuznetsov, also in the heat of the afternoon, having played his second in the cool wind of Thursday night on Ashe, he wanted to make sure he was as comfortable as possible with the humid conditions.

So it was an early practice session, surrounded by his usual team and the quiet presence of coach Amelie Mauresmo, that the fans found there just after 10am. Nothing would be left to chance against the Russian playing in the third round of a Grand Slam for the second consecutive time. And at Wimbledon, he had beaten David Ferrer, as well.

So Murray certainly knew what to expect, even though he had not played the Russian before: “He’s had a couple big wins in the Slams this year. He beat Ferrer at Wimbledon and obviously [here] against Verdasco… I don’t know his game that well, but I’ve seen him play a little bit. He hits the ball pretty flat. Likes to go for his shots a lot. This court’s fairly quick, so that will probably help him, as well.”

He was not wrong. The Russian is a shot-maker, fast around the court, keen to take the attack to his opponent. However, Murray’s tactics were clearly to take the initiative away from Kuznetsov, and it could not have started better, with a break to take a 2-0 lead. Murray held off some sharp returning and two break points from the Russian in the third game with his fourth volley winner of the match.

With both men trying to take the net, it made for some entertaining tennis, but Murray was playing the better in all departments. He fought off a break point in the fifth game, broke again and cleaned up the first set, 6-1 in some style—12 winners to six errors, and 11 out of 11 points won at the net.

The second set began much the same, Murray breaking, resisting a break-back point for a 4-2 lead. But a careless service game in the eighth, concluding with a double fault, gave away the break, and it seemed to be heading to a tie-break, until Murray attacked again and broke for the set, 7-5.

Still Murray’s winners outnumbered his errors, 16 to 10, with 10 points won at the net. Everything looked under control, except that Kuznetsov had other ideas, and did not give up the attack. He was quick about the court, and his angled play from the baseline was a match even for the Briton’s. He broke in the fourth game as Murray fluffed a forehand and held to love with an ace.

Murray responded with renewed aggression, taking on his opponent’s serve and breaking to level, 4-4. But in the blink of an eye, it was Kuznetsov with a set point and Murray double faulted: 6-4 to the Russian.

It had taken exactly two hours, and now it would take a little longer. Kuznetsov was impressive in his resistance, and in his insistence on attack. It drew some great plays from Murray, and a break in the third game of the fourth set—and another in the fifth for a 4-1 lead. But Murray blinked again, berating himself furiously, at Kuznetsov stole a break back.

Murray made up for it with an immediate retaliation and finally served out the match, 6-2—but it had taken him over an hour longer than his rival’s victory across on Arthur Ashe: Novak Djokovic completed a swift win over Sam Querrey in a mere one hour and 25 minutes.

Murray next plays No10 seed Jo-Wilfried Tsonga, who scored a three-set win over in the quarters of the Toronto Masters a month ago. The Frenchman went on to win the title and, at his charismatic best, can cause huge problems to any player on the tour. Murray, in a low-key press conference, referred to their recent encounter:

“We played each other a lot of times. He’s obviously playing well right now. He had a great week in Canada. Yeah, he’s played some good tennis so far here. Obviously it will be a tough match.

“I’ve had a lot of close matches with him, but I’ve won a lot against him, as well. So I mean I would say [my game] matches up well… I’m aware it’s going to be a very tricky match.”

In Stan Wawrinka’s quarter at the bottom of the Djokovic-Murray half, Milos Raonic will face Kei Nishikori in the fourth round in a repeat of their match at the same stage at Wimbledon. On that occasion, Raonic won in four sets, but the Japanese No10 seed won their previous two meetings.

Footnote: Wawrinka advanced to the fourth round without lifting a racket when his opponent Blaz Kavcic withdrew shortly before their scheduled match. The Swiss man will play either John Isner or Philipp Kohlschreiber for a quarter-final place.