US Open 2014: Roger Federer beats Roberto Bautista Agut in straight sets to set up a quarter-final with Gael Monfils 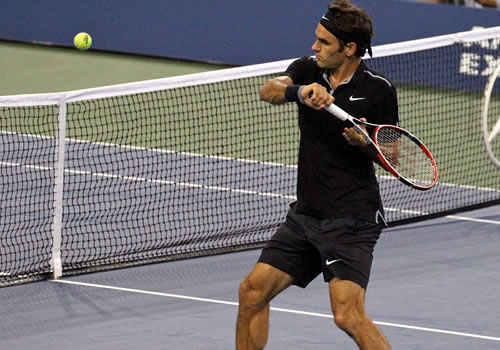 Roger Federer is through to the last eight in New York Photo: Marianne Bevis

The bottom quarter of the men’s draw in New York had perhaps not unfolded as the seeds suggested it would. For Roger Federer, that threw up some brand new challenges.

He had never played his second opponent Sam Groth, but was told that he held the unofficial record for serve speed. Not that big servers have often been a particular headache for five-time champion Federer. Rarely have John Isner or Ivo Karlovic or Milos Raonic beaten him—twice in a combined total of 23 matches—and Groth didn’t either, despite pounding down a 142mph serve.

It should have been No25 Karlovic in the third round, but Marcel Granollers upset the veteran Croat, and began by upsetting Federer too—racing to take the first set before Federer recalibrated and gave the Spaniard just three more games in the remaining three sets.

The passport to Federer’s 10th US Open quarter-final was another unknown quantity, the No17 seed Roberto Bautista Agut, one of the most improved players on the tour having risen from 59 last year via the first two titles of his career this season. Federer had not played him before but he had done his homework:

“He’s quick on his feet. He doesn’t miss much. He’s consistent. He’s got a pretty good first serve. He’s overall a solid player. I would assume he’s fit, too, because he comes from the Spanish tennis school… They never get tired. They have a good mental approach, point-for-point mentality. Then again, he’s not the typical Spaniard with a lot of topspin. He plays unbelievably flat actually, which is very surprising for a Spaniard.”

Not a bad appraisal of a man he had never played—and when it came to the match, he proved to be spot on. Even so, Federer scored a 6-4, 6-3, 6-2 win, but it was a testing contest of considerable variety that demanded both mental and physical agility from the Swiss—and the two-hours duration and a break of the Federer serve in the first set proved how taxing it had been.

So far, then, new challenges from new opponents, yet some old-fashioned Federer results.

But when it comes to Federer and New York, opponents are not the only familiar elements.

Even so, Federer is the headline act, the one who draws the crowds, the one who packs not just the bleachers behind his practice court but those behind all the adjacent courts as well.

And so, as surely as night follows day, Federer plays on the biggest stage, in the headline slot. That equates to night sessions for every match except on Labor Day weekend: That’s when New Yorkers want their tennis during the day and their revelry at night.

Federer’s only day session, then, was Sunday but even that was turned from day to night courtesy of the rain-storms that swept through Flushing Meadows less than half an hour into his match.

It was long enough to give Nike’s blue-and-green ensemble an airing, but night-time, New York and Roger Federer have one more tradition: it is back to black.

The Federer fashion statement made its boldest appearance en route to his fourth consecutive US title in 2007—so unrelieved by colour that he earned the moniker “Darth Federer”.

This year, though, it’s black with a vengeance—and with a fresh twist: a nod to Nike stable-mate Michael Jordan in some bespoke white and grey Airs.

So just how much involvement does he have in these looks? “I’m very involved with what I wear, with designs, and especially colour waves, as well. Because I think colour in some ways is very personal. I might not like some colours to others and some combinations just don’t appeal.

“But for me, especially since the RF logo, the brand all started to happen, I have obviously been more involved. I always had more input. We try to meet on a regular basis.”

There was some speculation, when Federer debuted his new Wilson racket this year—in a matt-black test version—that the “production model” may keep the dark look, but that was never an option: “The racket, that was always going to change once I definitely chose [the model], there was going to be cosmetic on it.

“That was also my wish with Wilson, that there was going to be a cosmetic change from the black.”

So some things never change: Federer featuring in Arthur Ashe night matches—and he now has a 27-1 winning record in them—and making his own kind of sartorial entrance.

More important for Federer this year, of course, is that the tennis player of old seems to be back, too, after an uncharacteristic fourth-round loss here—in a day match and on Armstrong, as it happens.

Here, arriving with back-to-back finals in four tournaments and a 22nd Masters title in Cincinnati, Federer leads the tour in 2014match-wins: 53 for just nine losses. For some context, the next in line is Rafael Nadal with 44 wins.

He has also been playing his favoured brand of attacking tennis, upped to a new level since taking Stefan Edberg into his team. He won 35 points from 52 played at the front of the court against Bautista Agut, 32 from 51 against Granollers, 22 from 30 in his first match against Marinko Matosevic. He is clearly revelling in his confident athleticism.

“I’m happy I’m able to come forward now because coming to net requires a lot of agility and explosiveness and I have it back. I’m happy I’m feeling good at net because you’ve got to anticipate some, read some and it’s working really well. I hope I can keep it up.”

There were no more storms for Federer at Flushing Meadows tonight: Just the same old, same old—and, as always, it made the fans very happy.

Footnote: Federer next plays No20 seed Gael Monfils, who beat No7 seed Grigor Dimitrov, 7-5, 7-6, 7-5. The two men met last month in Cincinnati, which Federer won in three sets en route to the title.