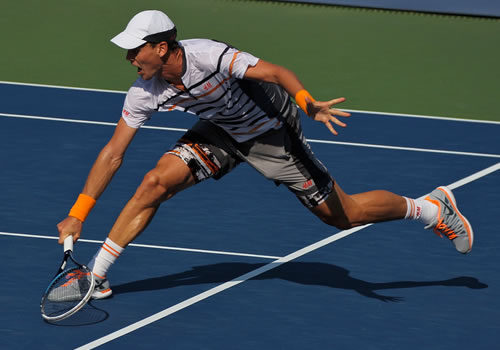 For a such a big man with such a big game, it’s little wonder that Tomas Berdych, who turns 29 later this month, has scored victories over the biggest names in tennis, has gone deep into all the Grand Slams, has scaled the heights of No5 in the rankings exactly a year ago.

The powerful Czech has beaten five-time champion Roger Federer at the US Open—in the quarters in 2012—as well as in the quarters of Wimbledon in 2010, where he went on to beat Novak Djokovic in the semis.

He has beaten Andy Murray on clay and on hard courts, and came close to ending Stan Wawrinka’s dream run in Melbourne this year, losing the tightest of contests, 3-6, 7-6, 6-7, 6-7.

He has nine titles from 22 finals, winning the Paris Masters nine years ago, and yet he has reached the final of only one Grand Slam—falling short at the final hurdle in that 2010 run at Wimbledon.

And also surprisingly, for a man whose titles have come more from hard courts than any other surface, the US Open has been, by his standards, his least successful Major. Only once has he got beyond the fourth round when he reached the semis in 2012.

Yet he has been one of the most durable and consistent men on the tennis circuit over the last decade. Since his first Grand Slam appearance—here in New York in 2003—he has not missed a single Major, and is now eighth on the all-time list for most consecutive appearances.

Now Berdych was in pursuit of his 100th Grand Slam match-win, his 25th in New York, but his problem was one of the most dangerous opening-round opponents you could wish to meet.

Like contemporary Federer, the 33-year-old Lleyton Hewitt had played in 61 Majors and won his first two years earlier. His only US Open title came in 2001 and he won his only Wimbledon title the year before Federer went on his winning spree at the All England Club.

Despite injury upon injury, surgery upon surgery in the intervening years, he has remained one of the most dogged fighters on a tennis court. Last year’s performance here summed up the spirit of the man. In baking conditions he beat first Juan Martin del Potro in the second round in five sets, played another four sets in the third round and was one half of one of the best matches of the tournament, losing in five sets to Mikhail Youzhny.

And far from hanging up his racket, he had won two titles this year for the first time since 2010. He was, in short, not the best man to be facing with your 100th Major match-win on the table.

But right from the off, this was not the Hewitt of last year. He struggled to return the flat power of Berdych from the baseline, and that was especially so today on the hottest day of the New York summer.

Then Hewitt looked as though he was ready to make his characteristic comeback with an immediate break in the second set, and he carried that to 4-1. But Berdych is a wily campaigner, too, and made some strategic transitions to the net in an aggressive shift in his tactics. Hewitt seemed pinned behind the baseline by the depth and width of the Czech hitting, and was powerless to avoid a break back in the seventh game.

But Hewitt’s middle name is ‘grit’, and he came close to punching another hole in the Berdych serve. The eighth game went to almost 10 minutes, with four deuces and a break point, but Berdych stood his ground, held, and turned the tables to break again. Suddenly, Hewitt was facing more trouble, and added to a growing tally of double faults to concede a decisive break and the set, 6-4.

The third set also brought an early break, again to Berdych, and although Hewitt rallied to level at 3-3, he would not win another game, let down by increasing errors on his serve and an inability to contain the one-two strikes of Berdych. The Czech had his win, 6-3.

He was particularly pleased that he had overcome such a tough opening combination: “I feel pretty good. It’s a tough opponent, a big challenge. The conditions were extremely tough today. The heat, the wind, and facing Lleyton for the first round, it’s nothing that what you really want to have. But otherwise, when you are prepared and feel good, that’s a perfect start.”

Hewitt was guarded when asked, not for the first time, whether he would still be here next year… it’s the kind of question that comes with 33 years and a growing family. Unlike Federer, though, Hewitt has overcome so many injuries and taken so many ranking hits that his task is all the harder. He would simply say:
“Don’’ know: Get that asked every week. I really don’t know. Just wait and see.”

This testing opener boded well for Berdych that he made 43 winners against such a dogged counterpuncher, and it was noticeable too that he came to the net 19 times.

The combination earned him that 100th win, and he will aim to win his 101st against an opponent who spent considerably longer to seal his second-round place, Martin Klizan. The Slovak fought back from two sets down to overcome Steve Darcis in 3hrs 37mins, 3-6, 2-6, 7-6, 7-5, 6-4.

Another man in this quarter, No18 seed Kevin Anderson, fought from a break down in the final set to beat Pablo Cuevas, 6-3, 6-7, 4-6, 6-2, 7-6. Cuevas had served for the match in the decider, but was unable to close it out as Anderson battled back for victory in just over four hours.

Anderson, enjoying one of the best seasons of his career, hit an impressive 61 winners, 29 of them aces and six out of six from serve-and-volley plays.

It set up a fascinating contest between big-serving big-hitters in the second round, for Anderson now face Jerzy Janowicz. The Pole, after an injury-blighted few months following his semi-final run at Wimbledon last year, is coming into form at the right time, having reached the final of Winston-Salem last week.

Another big man who has discovered great hard-court form this season—a 26-8 record that took in the Delray Beach title and Rotterdam final—was leading 6-3, 3-1 when Marcos Baghdatis was forced to retire. Cilic, a two-time quarter-finalist at Flushing Meadows, will next face qualifier Illya Marchenko, who beat Swiss Marco Chiudinelli 7-6, 4-6, 7-6, 7-6.

There was also victory for 32-year-old Feliciano Lopez, who had just levelled his match at two sets apiece, when Ivan Dodig picked up an injury in the first game of the fifth and was forced to retire.