US Open 2014: Novak Djokovic is the top seed at flushing meadows in the absence of the injured Rafael Nadal 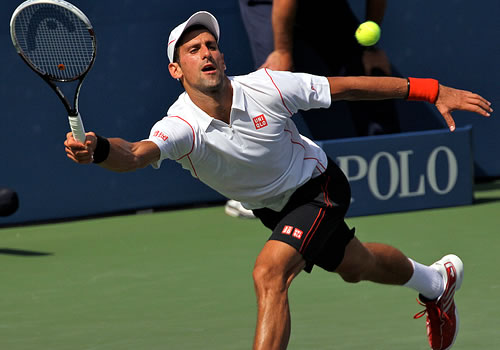 Novak Djokovic is the top seed at the US Open Photo: Marianne Bevis

Two of the in-form players of the year claim the top two spots in the men’s seedings for the final Grand Slam of the year, which begins in New York on Monday.

Top seed Novak Djokovic won the Indian Wells, Miami and Rome Masters, reached the final of the French Open and reclaimed the No1 ranking after winning the Wimbledon title.

The Serb’s opponent in the Wimbledon final, second seed Roger Federer, was the losing finalist at the Indian Wells, Monte Carlo and Toronto Masters but sealed his third title of the year, after Dubai and Halle, with his sixth Cincinnati Masters trophy last week.

Though still ranked No3, Federer claimed the valuable second spot after defending champion Rafael Nadal withdrew this week as he continues to carry a wrist injury. The Spaniard conceded the No1 ranking to Djokovic after losing in the fourth round at Wimbledon, and has been unable to play since, missing both the North American Masters tournaments that pave the way to the US Open.

The seedings ensure that Djokovic and Federer, both former US Open champions, cannot meet before the final. Seeded to meet them in the semis are Australian Open champion and No3 seed Stan Wawrinka, and losing Cincinnati finalist and No4 seed David Ferrer. The points gained by the 32-Spaniard last weekend gave him a last-minute boost to No5 in the rankings—at the expense of this week’s No7, Tomas Berdych—and thus, courtesy of Nadal’s withdrawal, a top-four spot.

Another man to benefit from Nadal’s misfortune is the third former US champion in the seedings, Andy Murray. Ranked No9, he is bumped up to No8, ensuring he cannot meet the top four before the quarter-finals.

Making his top-eight seeding debut in a Grand Slam is Grigor Dimitrov, whose Queen’s title and semi-final run at Wimbledon saw him break the top 10 for the first time.

With 2009 US Open champion Juan Martin del Potro, who has slipped to No13 in the rankings, still out of action after wrist surgery, Marin Cilic, Fabio Fognini and Tommy Robredo have made the cut for the top 16, and so cannot meet a top-eight player before Round 4.

Cilic’s third-round finishes in Toronto and Cincinnati lifted him from No19 last week to nab his valuable No14 seeding. Fognini and Robredo, too, made late surges in the last fortnight to edge into the 16 seedings at the expense of Roberto Bautista Agut, Kevin Anderson and Feliciano Lopez, who all slipped in the rankings this week.

Injury has claimed a clutch of other players in the 16-32 band: Tommy Haas, Alexandr Dolgopolov and Nicolas Almagro. The lowest ranked man to make the cut, at No37, is a fortunate Joao Sousa. A word, too, for 32-year-old Frenchman Julien Benneteau, who jumped in as No24 seed after a semi finish in Cincinnati lifted him 14 places.