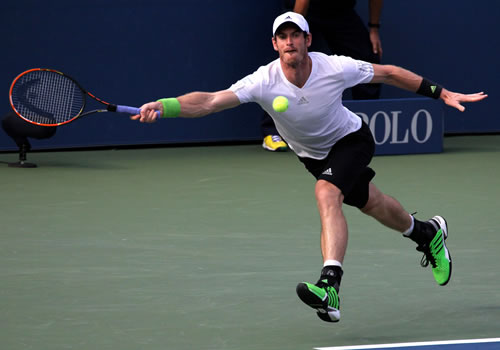 It was a long time coming, the quarter-final that jumped off the draw sheet almost two weeks ago.

It looked at times, too, as though Andy Murray may not make it to his allotted place among the final eight to take on long-standing rival Novak Djokovic.

In his very first match, he was almost doubled up in pain by body cramps but survived. Twice he played on Armstrong, the site of a huge scare in the second round in 2011, and sure enough he dropped a set there in both matches.

And he had, on paper, a difficult draw: first Robin Haase, the man who took him to fives sets in 2011, followed by Fernando Verdasco, who gave Murray a similar scare at Wimbledon last year, and then Jo-Wilfried Tsonga in the fourth round—and the Frenchman had beaten him last month in Toronto.

And with each match Murray was looking better, more confident, more offensive in his tactics. Against Tsonga, in an intense, hot and humid contest, he made 28 points from 31 net attacks in his most convincing performance so far.

But now the road ahead became much steeper, for it was the quarter-finals and his 21st meeting with Djokovic.

For the Serb held the upper hand in their rivalry 12-8, including four of their last five matches. But perhaps more significant on this occasion, Murray had won two of their last three Grand Slam matches, all of them finals. Djokovic prevailed in Australia last year, but Murray won his first Major here in 2012 in a record-breaking 4hrs 54mins final, and then his first Wimbledon title last year, in an altogether more straightforward three sets.

If Murray’s form was improving as he worked his way back to fighting fitness following back surgery, then Djokovic was also timing his run here to perfection.

The top seed may have lost early in both Toronto and Cincinnati, but look back to his spring and summer, and he won Indian Wells and Miami back to back, then the Rome Masters, reached the final of Roland Garros and won at the All England Club.

There is no denying that Djokovic also loves this tournament and thrives on North America’s hard courts. Now in his 10th visit to New York, he has not fallen short of the semis since finishing runner-up in 2007. He has to the final in the last four years and, against Murray, was lining up his 50th match-win at the tournament. And his progress to that goal had been seamless: Not a set dropped, and only 18 games dropped in his first three matches.

But Murray relished the challenge ahead: “I think that’s really why we play the game. You know, that’s what you put the work in for, so that when you come to these events and you do have to play against the best players that you’re ready. As much as it’s incredibly tough and challenging, that’s what you enjoy.”

But this quarter-final was still a long time coming. Already scheduled to be the last match of the night after women’s top seed Serena Williams bid for her own place in the semis, the entire schedule at Flushing Meadows was thrown out by one of the matches of the tournament thus far.

It was the match that would determine the semi-final opponent for Murray or Djokovic between No3 seed Stan Wawrinka and No10 seed Kei Nishikori—and it would unfold in a compelling, closely fought contest of five sets and 4hrs 15mins. Niskikori survived, despite playing one of the US Open’s latest ever finishes just two nights before, the first Japanese man to win here since 1918.

Could the Murray-Djokovic confrontation, highly anticipated as it was, live up to that?

Well it was of an entirely different style, and with far more ebbs and flows between the players. Rarely can two players of such quality and with such Grand Slam pedigree have been broken so often, but such is the evenness of the skills of these two men—both extraordinary defenders and movers, and equally able to generate pace and change of direction from the baseline.

The match began with a break on both sides after a tally of six break points between them. It was edgy, with plenty of errors as each tried to probe the other. One stunning long baseline rally to Djokovic had him appeal to the crowd for support—the majority seemed to be in Murray’s corner—but minutes later, Murray did the same: A pair of prize-fighters staring each other down.

Djokovic was the first to hold, though faced yet another break point, and broke Murray again for a 3-1 lead. Sure enough, the Serb had to fend off a break chance in the fifth, but held. However, this set would lay down the pattern for the match, and Murray levelled again to snatch the initiative with a great lob and a very rare venture to the net—strange given how successful it had been in his previous match.

It would, of necessity, end in a tie-break after an intense battle for control, and Murray lost concentration and the set- 7-1.

Extraordinarily the second set began the same, a break and 3-1 for Djokovic, but Murray returned the favour and they exchanged another break each en route to another tie-break. First one player was on fire, then the other, Murray firing countless cross-court forehands like missiles. And this time, it was Murray who surged to a 7-1 set. The only difference between them in each set could be measured in a half a dozen errors more or less to either man.

When the third set began to the same template, a quick break and a 3-1 lead to Djokovic, surely another topsy-turvey set with a concluding tie-break was on the cards, especially when Djokovic faced break points in the fifth game. But this time Djokovic resisted, cutting his errors right down to six, against 14 from Murray. The Briton was beginning to lose out from the baseline but still did not mix it up at the net—except to save the first of two break points. He gave away the second, though, to concede the set, 6-2.

By the time they reached an uneventful 3-3 in the fourth, there were three and a half hours on the clock, and Murray switched to a warmer shirt and used a heat pack on his back—for stiffness, he afterwards confirmed—at the change of ends.

At 4-4, Djokovic bit-by-bit seemed the calmer, the more in control of things. And Murray had the extra pressure of serving second. At 4-5 it was to save the match.

At 1.15 in the morning, he faced two break points and netted one last backhand to bring the curtain down on a match that was strangely unpredictable, lacking in rhythm and flow, at times jaw-droppingly brilliant, at others wayward in its errors.

But it was compelling watching as only Murray and Djokovic matches can be, and as Djokovic acknowledged: “We both gave our best. At times the tennis was not that nice: We made a lot of unforced errors, and was due to the very physical battle in the first two sets. I think they lasted over two hours. The last five or so times we played we went over four hours, so we get used to it after a while.

“Andy has immense quality on any surface: I knew the more aggressive one would win.”

And interestingly, it was Djokovic who had taken to the front of court more than twice the times Murray ventured in.

Murray may rue not taking the attack to his rival more readily, but against the kind of court coverage, flexibility and shot-selection Djokovic has at his disposal, that is easier to say than do.

So Djokovic has reached his eighth consecutive US Open semi-final—and to give some context, that equals Roger Federer and Ivan Lendl. Ahead lies Kei Nishikori, who he has not played in three years—and the Japanese man has ranked 32 at the time. He is a different player now: Just aks Wawrinka.

The second semi-final will be determined some time Thursday night when Tomas Berdych has played Marin Cilic and Federer has played Gael Monfils.